Plot Summary: 24 is a serial drama which stars Kiefer Sutherland as Jack Bauer, focusing on the efforts of the fictional Counter Terrorist Unit to protect America from terrorism plots. Each episode typically follows Bauer, officials in the U.S. government, and the conspirators behind the events of the day, often simultaneously. The episodes take place over the course of one hour, depicting events as they happen, in real time. To emphasize the real-world flow of events, a clock is prominently displayed on-screen during the show, and there is a regular use of split screens, a technique used to depict multiple scenes occurring at the same time.

Plot Summary: After leading a mission to eliminate terrorist leader Sheik Ibrahim Bin-Khalid, Eric Carter (Corey Hawkins), returns to the U.S. and finds out that he and his squad mates are targeted for assassination in retaliation for Bin-Khalid’s death. With nowhere else to turn, Carter asks CTU to help him save his life while also stopping one of the largest-scale terror attacks on American soil. The events will take place three years after the events in 24: Live Another Day and is set in Washington, D.C.

Season 1 begins at midnight on the day of the California presidential primary. Jack Bauer’s protocol is to protect Senator David Palmer from an assassination plot and rescue his own family from those responsible for the plot, who seek retribution for Jack and Palmer’s involvement with a covert American mission in the Balkans.[/details]

Season 2, set 18 months later, begins at 8:00 a.m. Jack must stop a nuclear bomb from detonating in Los Angeles, then assist President David Palmer in proving who is responsible for the threat. This is necessary to avoid an unfounded war between the U.S. and three Middle Eastern countries.[/details]

Season 3, set three years later, begins at 1:00 p.m. Jack must again infiltrate a Mexican drug cartel to seize a deadly virus being marketed underground. Meanwhile, Palmer attempts to be devoid of further political scandal which could cost him his presidency. Later, Jack and Palmer must cooperate with terrorist Stephen Saunders, who eventually gains possession of the virus, and stop him from releasing it in several American cities.[/details]

Season 4, set 18 months later, begins at 7:00 a.m. Jack must save the lives of his new boss, Secretary of Defense James Heller, and Heller’s daughter Audrey Raines (with whom Jack is romantically involved) when they are kidnapped by terrorists. However, Habib Marwan uses this as a disguise to launch further attacks against America, and Jack is forced to use unorthodox methods to stop him, which results in long-term consequences for both Jack and the United States.[/details]

Season 5, set 18 months after, begins at 7:00 a.m. Jack is believed to be dead by everyone except a few of his closest friends. He is forced to resurface when some of those friends are murdered and he is framed by terrorists with connections to the American government. The acquisition of nerve gas to protect U.S. oil interests in Asia backfires, and Jack discovers an insidious conspiracy while trying to stop those responsible.[/details]

Season 6, set 20 months later, begins at 6:00 a.m. Jack is released after being detained in a Chinese prison following the events of Season 5. Terrorists who hold a vendetta against Jack plot to set off suitcase nuclear devices in America and he must secure them. Later, Jack is forced to choose between those he loves and national security when the Chinese set their sights on sensitive circuitry that could trigger a war between the U.S. and Russia.[/details]

Season 7, set 65 days after the end of Redemption, begins at 8:00 a.m. Jack is assisted by the FBI and covert operatives when the firewall for America’s federal computer infrastructure is breached by the same people responsible for a conflict in Sangala. Jack must uncover who is corrupted within President Taylor’s administration, which has allowed for the Sangalans to raid the White House and capture Taylor. She is later blackmailed by a fictional private military company in an attempt to release biological weapons on U.S. soil. Jack must thwart these attacks so the conspirators will fail to cement their power at a government level.[/details]

Season 8, set 18 months later, begins at 4:00 p.m. Jack is brought in by CTU to uncover a Russian plot to assassinate Islamic leader Omar Hassan during peace negotiations with U.S. President Taylor. Russia’s contingency plan involves engineering a dirty bomb, which Islamic extremists threaten to detonate unless Hassan is handed over. Jack seeks retribution for personal losses suffered after Charles Logan convinces Taylor to cover up these crimes to protect the peace agreement. Jack becomes a fugitive from Russian and American governments and disappears.[/details]

Live Another Day, set four years later, begins at 11:00 a.m. and finds fugitive Jack in London trying to stop an assassination attempt on President James Heller by terrorist Margot Al-Harazi.[12] Later, Jack must prevent an old enemy and a Russian diplomat from sparking a war between the U.S. and China.[/details] 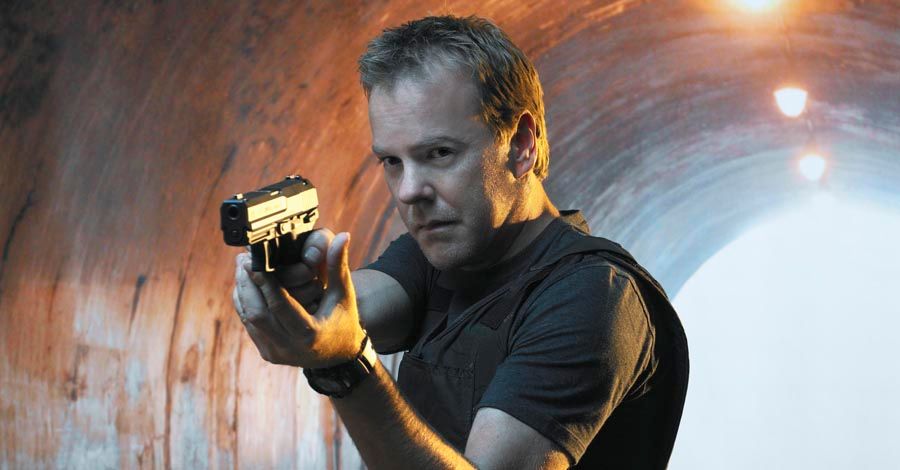 The actor says he won't make a guest appearance in Fox's upcoming reboot of the espionage thriller series.