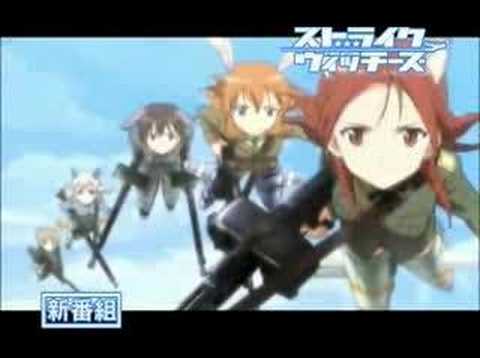 Genres: action, magic, science fiction
Themes: fanservice, lolicon, mecha musume, military, witches
Objectionable content: Significant
Plot Summary: The year is 1939 - it was then that the Neuroi appeared. Nobody knows where they came from or what their ultimate agenda is, but the fact remains that their attacks drove people out of their towns and cities. In order to take arms against them, humanity develops a new anti-Neuroi weapon called the “Striker Unit.” Using the power of magic to fight against the monsters, this new device enhances and amplifies the power of female magic-wielders. To use this device, young witches from all over the world have been brought together to form an elite task force unit called the 501st Joint Fighter Wing, commonly known as the “Strike Witches.”
Number of episodes: 12
Vintage: 2008-07-03

Genres: action, magic, science fiction
Themes: fanservice, mecha musume, military, Shoujo-ai, witches
Objectionable content: Significant
Plot Summary: After discovering that Neuroi are capable of communication with humans and making peace with the nest above Gallia the Witches squads are now on a mission to reestablish communication when a sudden attack vanishes the Neuroi, they now discover a new and massive nest that just appeared covering almost all Europe. Ruthless and without mercy it annihilates allied forces along Witches. Word of the attack reaches Fuso and a support battalion is deployed to rescue the survivors, among the rescue team is the former Striker captain Mio Sakamoto and the now civilian Yoshika Miyafuji who want to save her dear friends.
Number of episodes: 12
Vintage: 2010-07-07

Genres: action, magic, science fiction
Themes: ecchi, military
Plot Summary: The Neuroi, an enemy of mankind, suddenly appeared mainly in Europe in the 1930s. Only girls with special magical powers called Witches could confront the Neuroi who were difficult to destroy with ordinary weapons. In 1944, the Neuroi nest above the republic of Gallia was eradicated, and safety of western Europe has been ensured. The allied forces earnestly began planning for an oppositional operation towards central and eastern Europe. An order to scramble is given to the 502nd Joint Fighter Wing “Brave Witches” whose base is in Peterburg within the Orussian Empire.
Number of episodes: 12
Vintage: 2016-10-05

I watched the first two episodes of this on FUNimation’s online player and winded up buying it to watch the rest, since I’m a big
Kira Vincent-Davis fan.
It’s still on my backlog currently, but I’ll get around to finishing it up some time soon.

You can watch it today in honor of Memorial Day.

I have other things to do currently.

:laugh:
As long as you don’t spoil it for me, it should be fine.

The first season started out strong, but grew tedious and felt overlong at only 12 episodes. I am still somewhat tempted to check out the second season in hopes that it stays fun throughout the entire series. 6 episodes would have been a good run for the first season IMO.

I haven’t checked it out yet, I need to finished the first season before I do.

So much backlog, so little time.

I started watching the DVDs tonight of the first season, so I can get the general story in preperation of watching the second season on CrunchyRoll.

Looking past the fanservice (of which this series is very heavy on), I’m finding that the overall story is actually kind of unique, and I’m rather enjoying the plot and the aerial combat.

So I finished up the DVDs.

I really enjoyed the first season.
Parts of it reminded me of Vandread (the enemy weapons and abilities) but all in all it was actually a rather unique and fun watch.

Also watched the first episode of the second season on CR.
By the end of season one, I really wondered how they were going to continue it, but they did a pretty good job at tying it in.

Dfinitely going to finish the second season, as I now want to know how it all turns out.

Speaking of which, I finishd up ep. 02 of S2 earlier.
With this episode, it’s back to the Strike Witches we all know and love!

I really hope FUNi gets S2, I really want to see it dubbed and get my KVD fix.

So far, with a just little lacking, this is turning out much like the first season, which was awesome.

So few series that come back for another season later on do the first season justice.
But this is doing just that, if not more.

Second.
A day or two after it shows, I check http://www.sankakucomplex.com/tag/strike-witches/ (NSFW) since they often post screenshots comparing the Japanese satellite feed (AT-X) versus terrestrial. The censorship on the feed Crunchyroll shows is usually between those two extremes.

That was rather awesome!
Not to mention, very touching.

I guess they have to stick with the formula.