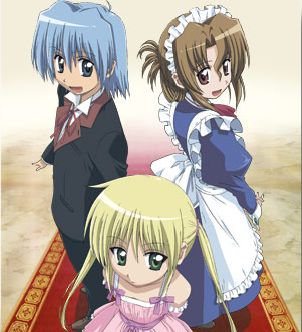 Genres: action, comedy, romance, slice of life
Themes: butlers, fanservice, hikikomori, love polygon, maids, otaku, parody, school
Objectionable content: Mild
Plot Summary: Abandoned by his parents and given a monumentally large debt as a Christmas present, 16-year old Ayasaki Hayate is at the lowest point of his life. Desperately trying alter his hapless fate, he decides to kidnap someone to hold for a ransom. Due to an ill choice of words, the girl he tries to kidnap misunderstands the action as a confession of love. His plan is totally crushed when he gives his real name out. Realizing his wrongdoing, Hayate proceeds to rescue the girl from the yakuza, who had instead kidnapped her. The girl, as a token of thanks, offers Hayate a job as her butler. Hayate, overwhelmed by her kindness, vows to protect her even at the cost of his life.
Number of episodes: 52
Vintage: 2007-04-01 to 2008-03-30 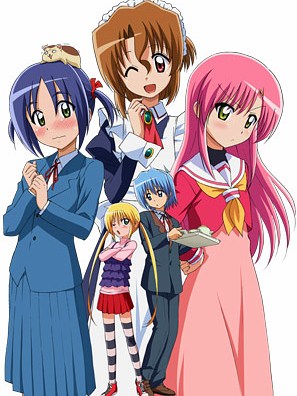 Genres: action, comedy, romance, slice of life
Themes: butlers, fanservice, hikikomori, love polygon, maids, otaku, parody, school, school life, tsundere
Objectionable content: Mild
Plot Summary: It has been three months since Hayate was abandoned by his parents and started work at the Sanzenin Manor as a butler to pay off his parents’ debt. However, being the butler for the otaku-crazed lady of the house, Nagi Sanzenin, is a hard task, not made easier by the friends and enemies of the Sanzenin, of which Hayate always ends up in the middle of the problem. And his life may get even harder when Student Council President Hinagiku Katsura begins to realize her own feelings for the debt ridden butler.
Number of episodes: 25
Vintage: 2009-04-03 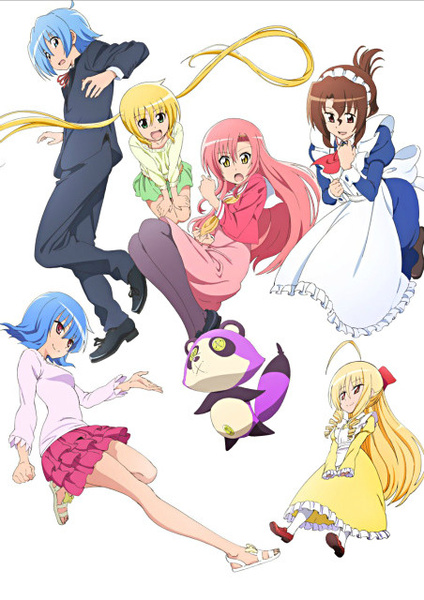 posted on 2008-07-04 19:50 EDT
Adaptation of Hayate the Combat Butler manga & manga based on The Girl Who Leapt Through Time film

Sentai Filmworks Adds Hayate the Combat Butler: Can’t Take My Eyes Off You

This one isn’t for me, though I’ll probably end up seeing at least some of it should it get a dub. It could be worthwhile it if Manglobe managed to keep their streak of incorporating Ergo Proxy references in their works alive with this one (though I think that ended with Karneval…).

Can’t Take My Eyes Off You: Complete Collection Cover/Disc Art

Hayate the Combat Butler! Can’t Take My Eyes Off You
Hayate Ayasaki, the butler/bodyguard for teenage heiress Nagi Sanzenin, must accompany Nagi to Las Vegas to pick up her late father’s belongings. Then Nagi meets a mysterious girl (with a hidden agenda) claiming to be Hayate’s little sister.
Starts: 4/24/2015
Language: Japanese w English Subtitles

Q. I noticed that the Blu-Ray cover of Hayate The Combat Butler! Can’t Take My Eyes Off You makes mention of it being the third season. (Reckon “Cuties” will say Season 4.) Is Sentai working on getting the first two seasons?
A. Yes, we are definitely working toward acquiring the other two seasons. We will have news on that front soon I think!

For those interesting in the show, it’s good to know people will get a uniform/updated set.

Hayate the Combat Butler: Can’t Take My Eyes Off of You, Eps 1-12 (Sub) are live at ANO

Hayate the Combat Butler: Can’t Take My Eyes Off of You, Eps 1-12 (Sub) are live at ANO

These episodes are now listed as FREE.

posted on 2013-04-03 16:52 EDT
New series where each episode follows different characters to premiere on April 8

COMING TO ANIME NETWORK IN MAY!