Plot Summary: A second-year high school boy finds himself uneasy during Christmas time due to an experience in the past. However, this year at Christmas, he gets his last chance to ask out a graduating female senior named Haruka Morishima—or one of several other classmates. The story of the anime will be arranged in an omnibus format, with each heroine getting her own version of the story animated. Each heroine will sing her own version of the ending theme song.

Plot Summary: Amagami SS+ continues to follow the life of Junichi Tachibana after the events of Amagami SS. Much like its predecessor, it is arranged in an omnibus format. Each character arc receives two additional episodes which expand on Junichi’s relationship with each girl following the closing episodes of Amagami SS.

The official website for the singer/songwriter azusa announced that azusa will sing the opening theme song “Check My Soul” and the ending song “Kokuhaku” for the up-coming television anime series Amagami SS+ plus, the second season of the anime adaptation of the popular dating sim, and has posted a 30-seconds pre-production video for “Check My Soul”. She sang “iLove” and “Kimi no Mamade”, the two OP songs for the Amagami SS first season in 2010. Amagami SS+ plus is scheduled to be broadcasted in Japan in January 2012. The “Check My Soul” CD will be released on February 1, 2012.

As an anime singer, azusa also sang “Yume Note”, the OP song for Moshidora and “Manatsu no Photograph”, the ED song for Astarotte’s Toy. Those songs were well-received among Japanese anime fans and became smash-hits on TOWER RECORDS Shinjuku store’s anime song ranking.

wonder whether it’ll be:

I liked this show. It was funny watching how one down on his luck joe ends up with a different woman through different means. Even Risa was funny to watch…creepy as hell, but funny.

I was looking it up in Wiki and it shows a season 2. Will the season 2 be coming to the Anime Network?

Sentai Filmworks has acquired season two and is releasing it in March. It will likely show up on Anime Network at some point, but it will probably be closer to the DVD street date.

Sentai Filmworks has acquired season two and is releasing it in March. It will likely show up on Anime Network at some point, but it will probably be closer to the DVD street date.

This show and one other were what drew me in to this network. Sad part is, I hate dramas, but they made me want to keep watching them more.

I wish more shows would do the multiple outcome ideas. Done properly they could make many seasons.

BD cover art has been posted.

I Would Like To Ask A Question, Might I Ask When Amagami SS (Season 1 And Season 2) Dubbed To English ?

No plans at this time that we know of.

Please don’t make more than one thread about the same topic.

I Will Make It Happen! I Will Make Amagami SS (Season 1 And Season 2) Dubbed To English.

The official Twitter account for the Amagami support site confirmed that a second season of Amagami SS was announced at the TBS Anime Festa event on Saturday. The tweet also notes that musical artist Azusa (Amagami SS OP1, Astarotte’s Toy ED) will once again perform the theme song.

Amagami originated as an all-aged dating simulator released in 2009 for the PlayStation 2. It went on to be adapted into a 26-episode animated series the following year. North American anime licensee Sentai Filmworks announced in May that they acquired the distribution rights to the first season of Amagami SS and will begin releasing the series starting September.

The original plot involved high school student Junichi Tachibana, who is heartbroken after a former girlfriend stood him up before a Christmas Eve meeting. Two years later, Tachibana continues to loath the Christmas season until he considers going out with one of six girls at his school.

The storyline for the second season has yet to be revealed.

Update: Fumitsu posted a similar article featuring an announcement video with clips from the first season of Amagami SS. 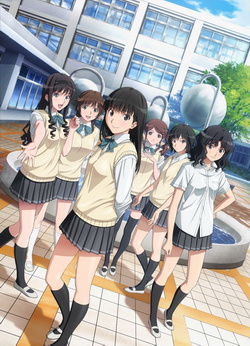 The Japanese anime distributor Pony Canyon will release the ongoing Amagami SS+ television anime series on six Blu-ray/Disc volumes between April and September, and each volume will have an unaired anime short. Each volume will also have audio commentary and a “Sweet Standee Kisekae+” card cut-out of one of the main characters with interchangeable accessories.

The story is set on a Sunday as Christmas draws near and the male lead Jun’ichi has not made any moves on a girl. Jun’ichi’s sister Miya goes to a hot spring that just opened with her classmates Sae and Ai. However, the other Amagami heroines — Tsukasa, Rihoko, Kaoru, and Haruka — also appear there. Without Jun’ichi, the girls talk among themselves at the hot spring.

The volume will come with a “Sweet Standee Kisekae+” card cut-out of Miya as well as stickers for interchangeable accessories on the cut-out.