Plot Summary: The story centers on Asuna, a girl who spends her solitary days listening to the mysterious music emanating from the crystal radio she received from her father as a memento. However, she embarks on a journey of adventure to meet a boy again, and thus comes to know the cruelty and beauty of the world, as well as loss.

The film distributor GKids announced that Makoto Shinkai 's latest animated feature, Children Who Chase Lost Voices from Deep Below, will be screening at New York City’s IFC Theater. Show times are scheduled for the following two weekends, April 21 and 22 as well as April 28 and 29, at 11:00 am. Ticket purchases are available Movietickets.com

Children Who Chase Lost Voices from Deep Below centers on Asuna, a girl who spends her solitary days listening to the mysterious music emanating from the crystal radio she received from her father as a memento. However, she embarks on a journey of adventure to find a mysterious boy she just met, and thus comes to know the cruelty and beauty of the world, as well as loss.

However, Shun disappears and Asuna embarks on a journey of adventure to the land of Agartha with her teacher Mr. Morisaki to meet a Shun again.

Well, there’s one teacher who’d be fired if this show took place in modern America

Sadly this movie doesn’t seem to focus on Oyajicon, which is how I thought it would go given the premise. It would have been a better movie if it had. You know it

I’m burnt out on Shinkai, so I don’t know if I’ll even give this one a shot. I want to like his stuff since it looks so good visually, but the majority of his works are just so aggravating, mostly because of the way they end. The Place Promised in Our Early Days was the only one I really enjoyed.

This should come as a surprise to no one, but this cast list makes me very happy. I can’t wait to see this. I’m also curious about the digital theater showings as well. We have a couple theaters nearby that are good about getting anime films.

The dub cast looks solid to me. With Foster directing, even if this is yet another abysmal work by Shinkai (I’ve avoided seeing it until the dub but the reviews I’ve read don’t give me hope) it will at least be watchable and probably hilarious.

I don’t think I would see this in a theater near me, despite my Sentai fandom, unless I didn’t have to pay. Luckily that just might happen as the number of people in my anime group who romanticize Shinkai sufficiently to overlook the horrendous quality of the story of his works vastly outnumber the group members who don’t, such as myself

Cover art is out.

I loved this movie. Fantastic story, terrific artwork and animation, and great dub to boot, but

I was a little disappointed at the ending. I still thought it was a 9.5 out of 10

I finally got to sit down and watch this and I have to say that I enjoyed it much more than I expected. It was good to see Shinkai try something a little different than his previous works. His traditional tones of loss and longing were there, but portrayed in a different light. I have to make the bluray a priority now.

Also, I want a Mimi!

This is flat out [size=16]GORGEOUS[/size] on BD. The colors are breathtaking.

now all this needs is a sequal

Children Who Chase Lost Voices (English Dub) will be expiring from the Anime Network Online Player on October 31, 2016. The subtitled version will remain. 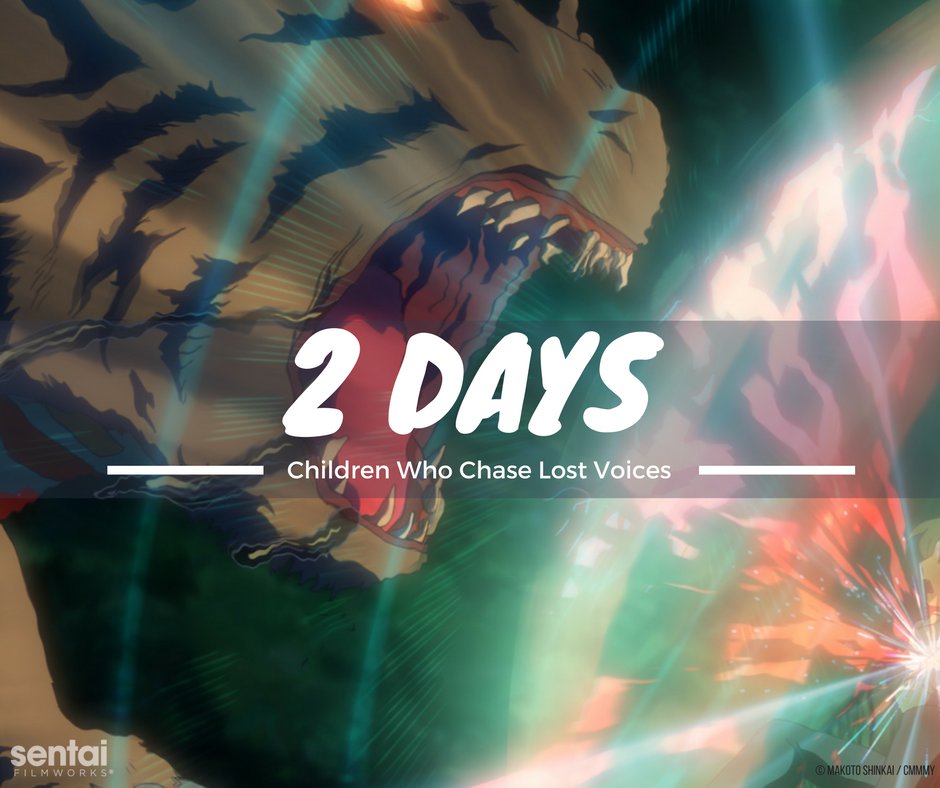 Put that extra Daylight Savings hour to use! Feast your eyes on Makoto Shinkai's Children Who Chase Lost Voices on Toonami.