Genres: adventure, fantasy
Themes: magical creatures, magical girl, monsters, other worlds
Objectionable content: Significant
Plot Summary: Three young girls, Hikaru, Umi, and Fuu, are transported to a magical world called Cephiro during a field trip to Tokyo Tower. They are soon greeted by Master Mage Clef, who explains to them that they have been summoned to become the Legendary Magic Knights and save Cephiro. The girls are less than enthusiastic about this idea, and only want to return home. Clef further explains that they must seek out the three Rune Gods to help them fight. He bestows armor and magical powers to each of them. They learn from Clef that High Priest Zagato has kidnapped the Pillar of Cephiro, Princess Emeraude. The Pillar of Cephiro has the sole responsibility of keeping Cephiro alive and in balance with her prayers. Without Princess Emeraude, Cephiro would fall into ruin. Hikaru, Umi, and Fuu must fight off Zagato’s henchman and find the Rune Gods if they ever want to get back home. They soon learn that friendship and loyalty are the only things they can rely on in the crumbling Cephiro.
Number of episodes: 20
Vintage: 1994-10-17 to 1995-03-13

Genres: adventure, fantasy, romance
Themes: magical creatures, magical girl, other worlds
Objectionable content: Significant
Plot Summary: Soon after Hikaru, Umi, and Fuu return to Tokyo, the three of them meet at Tokyo Tower to talk. Hikaru says that she wishes they could return to Cephiro and do something good for the land that Princess Emeraude protected so dearly. Umi and Fuu agree. Suddenly, a light appears in the sky and they are transported to Cephiro. Clef explains to them that with no Pillar to keep Cephiro peaceful, it has fallen into chaos. Monsters are multiplying and the land is becoming desolate. All the remaining inhabitants of Cephiro have moved into a magical castle. Clef also tells the girls some alarming news; three other countries, Chizeta, Fahren, and Autozam are trying to invade Cephiro and take over the Pillar system for their own purposes. The girls must stop the invaders as well as the mysterious and evil Lady Debonair, who believes she is the rightful Pillar, all the while desperately hoping and searching for a new Pillar to make Cephiro into the beautiful land it once was.
Number of episodes: 29
Vintage: 1995-04-10 to 1995-11-27[/quote]

Genres: adventure, drama, fantasy
Themes: magical girl, mecha
Objectionable content: Significant
Plot Summary: Hikaru, Umi and Fuu are just about to finish junior high and move away from each other. They don’t want to be separated, so a week before graduation they make a wish under a cherry blossom tree, to be together forever. The fairy of the tree hears their wish. That night they are out together having fun when Hikaru sees the fairy and runs blindly across the road to get to it. At this point her spirit guardian contacts her and gives her magic powers. She sees a man standing on Tokyo Tower in a vision, he sees her too, then he is attacked and is forced to sort of freeze the whole world, He, Hikaru, Umi, Fuu and the bad guys are the only ones left and the battle has begun.
Number of episodes: 3
Vintage: 1997-07-25

I really like the first season of this, except for perhaps the ending. It was more of a WTH? But the second season didn’t start off as strongly, and I just never finished it. I need to pick it back up someday.

I always dug the designs and mix of fantasy with this magical girl type show.
It really could be considered a precursor to Escaflowne for the idea of mixing a Shojo type show with some Shonen elements.

Hikaru used to look a little like Girl Ranma every once in a while. (it did not help that I saw them roughly the same time. )

To recap: we'll be including the original English dubbed pilot episode of MAGIC KNIGHT RAYEARTH with our forthcoming release!

This little-seen episode features a few divergent elements, such as Hikaru, Umi, and Fuu being renamed Luce, Marina, and Anemone...!
Slowhand June 12, 2016, 6:36pm #7 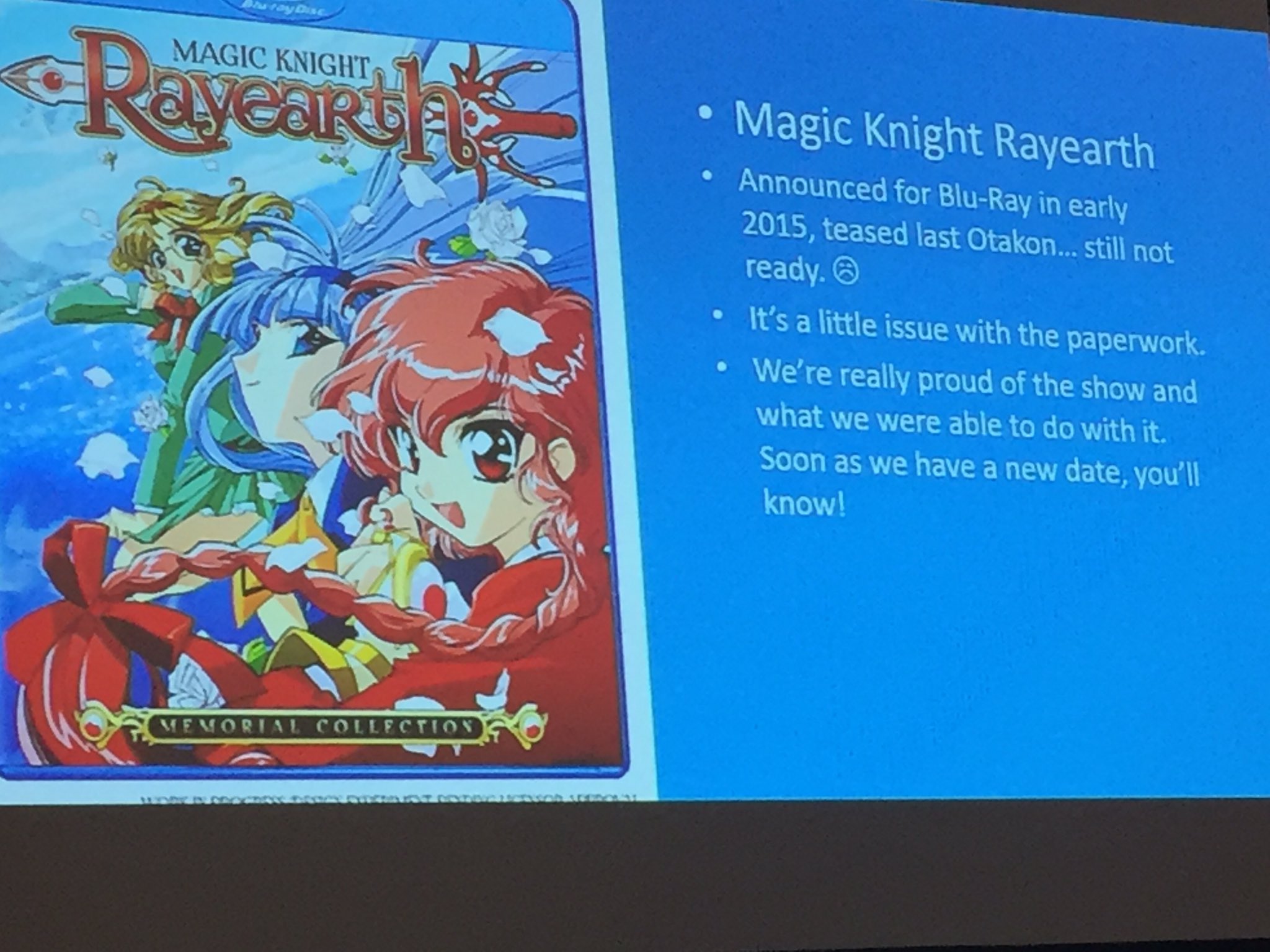