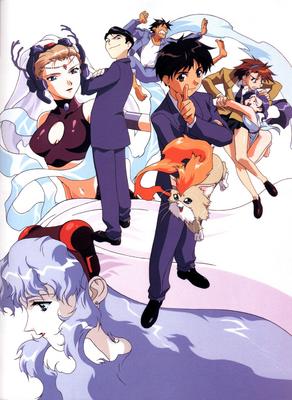 Genres: adventure, comedy, fantasy, romance
Themes: other world, priests and priestesses, yuri
Objectionable content: Significant
Plot Summary: When Makoto Mizuhara discovers an old monument in his school and awakens a beautiful woman, he, his teacher, his worst enemy and one of his female friends is transported to the magnificent world of El Hazard. There they discovers that they have received some special powers. Makoto and his teacher Fujisawa lands in a jungle and saves a princess from some large bugs. Makoto’s friend Nanami lands in a desert. And Makoto’s rival, Jinnai lands in the middle of the bug’s kingdom and becomes their general, plotting to destroy Makoto and his new friends. After several having his attacks repelled by Makoto several times, Jinnai learns about an ultimate weapon, the demon Ifurita. And so everyone sets of to find Ifurita, and when she’s found Makoto learns that she is the same woman that sent them to El Hazard. But the one gaining control of her is Jinnai.
**Number of episodes: 7
Vintage: 1995-05-26 to 1996-01-25 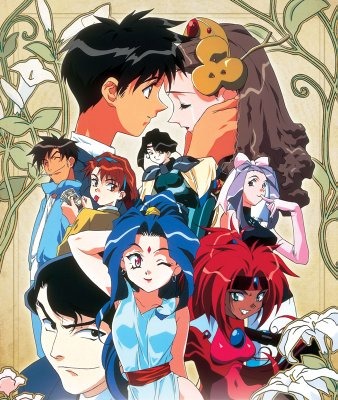 Genres: adventure, comedy
Themes: other world
Objectionable content: Significant
Plot Summary: Makoto Mizuhara is working on his latest experiment in the school science lab, but when he takes a break his lifelong rival Katsuhiko Jinnai shows up and attempts to destroy the device and discredit Makoto. This overloads the experiment and transports Makoto, Jinnai, his sister Nanami, and their teacher Mr. Fujisawa to the strange and magnificent world El Hazard. Makoto and Fujisawa land squarely in the Kingdom of Roshtaria, and quickly befriend the princess Rune Venus. Jinnai allies himself with the Bugrom, a race of giant insects bent on taking over El Hazard, while his sister tries to eke out her own living in the desert. Makoto searches desperately for a way to return home, all the while fighting off the Bugrom, enlisting the help of the Holy Priestesses, and stopping the demon god Ifurita from destroying everything.
Number of episodes: 26
Vintage: 1995-10-06 to 1996-03-29 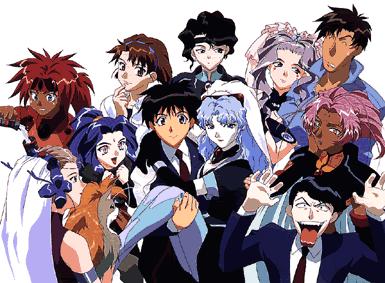 Genres: adventure, comedy, fantasy
Themes: other world
Objectionable content: Significant
Plot Summary: Continuing the from OVAs; When Fujisawa, suffering from cold feet, leaves Miz at the altar, an enraged Priestess drafts Makoto and friends to go find him. In the course of locating the hapless (and gutless) teacher, they find another Ifurita. Meanwhile Jinnai and Diva searching for a new Bugrom homeland stumble upon another yet another Demon God, the impish Kalia. However, unlike Ifurita she has a mind, and a mission, of her own…
Number of episodes: 4
Vintage: 1997-03-21 to 1997-10-25 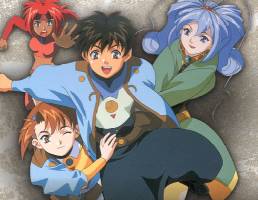 Genres: adventure, comedy, fantasy, romance
Themes: other world
Plot Summary: Miz plans to retire as a Great Priestess of Water to married life with her darling Fujisawa and as replacement the young Qawoor Towles arrives to Floristica. Jinnai sees Qawoor’s initiation ceremony as a chance to infiltrate Makoto’s laboratory but accidentally activates a mysterious thingy that sends them all through the dimensions to a grey industrial city protected by a huge castle in an alternative world.
Number of episodes: 13
Vintage: 1998-01-08 to 1998-03-25

I’m really excited that this great adventure fantasy series is coming to Anime Network. Those who haven’t seen it are in for a treat, it’s one of Pioneer/Geneon’s stronger titles and with the legendary English production talents of of ZRO/Animaze/Magnitude 8 (Code Geass, Black Jack, Cowboy Bebop, Ghost in the Shell, Trigun).

Check out the OP videos above, one of the cool new features of our new forum.

The series has some really great visuals and superb music.

Premieres on AN SVOD this week.

I had seen episode one already but so far the show is quite good, I look forward to more, Jinnai has the makings of one of the great characters in anime.

I watched the first 2 episodes on the online player, and I need more. I’ve always been a fan of the fantasy/comedy genre(i.e. Slayers) and this show has been great so far. I can’t wait to see this show every week.
Slick

I don’t know if anyone has been watching this series, but its a great old school show. Definitely worth watching if you like goofy comedies.
Slick

Right Stuf’s Nozomi Entertainment announced the license for the EL-HAZARD: THE WANDERERS television series. The 26-episode series will be released in one complete set on September 7, 2010. The EL-HAZARD: THE WANDERERS DVD Collection will feature Japanese and English-language audio options, English subtitles, and on-disc extras. It will be housed in a single, litebox-style keepcase. This alternate-universe reimagining of the El-Hazard franchise was produced by AIC, the studio behind fan-favorite series including Tenchi Muyo!, Battle Athletes and the anime adaptations of Ah! My Goddess, and it features direction by Katsuhito Akiyama (Dual!, Pumpkin Scissors) and character designs by Kazuto Nakazawa (House of Five Leaves, Starship Girl Yamamoto Yohko).

Loved that on TAN so will likely get it.

I watched it here on TAN.com. I might actually get it. It is a fun one.

Dragoon predicts the future…sort of =P .

It’s nice to see another Geneon title get rescued. I started watching this on the OP, but never finished it. I’m not a big fan of watching things online. I much prefer my flat screen, and may pick this up.

It’s definitely interesting to see Nozomi going with a litebox for a first release from them. They usually save that type of packaging for cheaper re-releases. Plus, it seems it will be 4 discs, so 6-7 episodes a disc. Oh no! I wonder how many people will whine about the “potential” video problems…

Since this is an Enoki title, and they are notorious for “package deals”, is anyone else hoping this was just picked up another certain Enoki property people have been clamoring for, aka Utena?

Screen comparison of the new upcoming versus old.
http://www.mania.com/nozomi-showcases-elhazard-video-comparison-shots_article_123923.html

That is a very nice improvement.

It looks much improved. I’ve enjoyed a few episodes of this on the online player and I will probably be picking it up.

I’m going to double dip on this. I’ve not watched the DVD’s I have so this is pretty nice. Now to decide to do I order this with SuperGals or something from the Bandai sale? Decisions Decisions…

They’ve posted a video comparison of the video upgrade.

For those that ordered from Rightstuf El Hazard: The Wanderers DVD Collection should be shipping soon as it’s been reserved.

Just some quick pictures of the inside of the case and back cover.

Yeah, that’s the same one they used for the “His and Her Circumstances” collection. I’m not a fan of it either, but then again I hate thin packs regardless of the configuration. They’re right up there with stack packs.