What a complete train wreck! The only thing I have seen fast-forward worse than this was the 19 year time jump after the death of Voldemort to when Harry was sending Albus Severus Potter off to school. At least there you didn’t miss a thing.

So much potential world development and character development lost. Glad I watched it online so as not to waste time with it on my TV.

Meh, still don’t see where it get’s all the hate from. What did they really expect from a lite-novel, seriously. Enjoyed it for what it is, better than say…Aria the Scarlett Ammo or…We Without Wings.

Perhaps they expected something more on par with High School DxD;Horizon/Aesthetica;Fate/Zero;Chaika;Edge of Tomorrow??

Light Novels aren’t generally amazing, sure, but this one was further south of the mark than usual. Perhaps that’s why the work’s creator said the anime was a bad idea?

EDIT: I don’t know about it being better than WWW. That show had some serious issues (to put it mildly…I feel kinda bad that I bought the LE) but the dub made it better than it was in Japanese and this show doesn’t yet have a dub.

What a complete train wreck!

The entry for this series on http://tvtropes.org/pmwiki/pmwiki.php/LightNovel/MahouSensou has this to say:

Gainax Ending: … (spoilers) … Combined with a number of other mostly-incomprehensible plot twists, and a lack of resolution for the series’ existing plot threads, it makes for a very confusing and unsatisfying ending.

Definitely incomplete at the end of episode 12!

ABOUT MAGICAL WARFARE
The last few years haven’t been easy for Takeshi Nanase. His parents are distant, his little brother despises him since “the accident,” and his relationship with his girl friend isn’t exactly romantic. Even one of the few high points in his existence, studying the Japanese swordfighting technique of Kendo, seems to be a dead end.

He’s got a definite knack for it, but it’s not something that’s likely to have any practical application in a future career - or so he thinks until he runs into an unconscious girl in an unknown uniform and suddenly has his world turned upside-down. In short order, he’s being held at (magical) gunpoint, rescuing damsels in distress, and finding himself facing off with a group of magic users!

But as shocking as finding his life in danger and learning that magic is real may be, what’s even more stunning is the revelation that Takeshi’s been changed into a magician himself! So maybe those sword lessons aren’t going to end up being so irrelevant after all!

Sad face. Pretty much a given then that this show isn’t going to get the “no-holds-barred”, Ghost Stories-style dub that it needs to save it. When the original creator of the franchise says that the anime was ill-advised, and the fandom concurs, then it is time for an unfaithful dub.

Premiering on AN Online Player 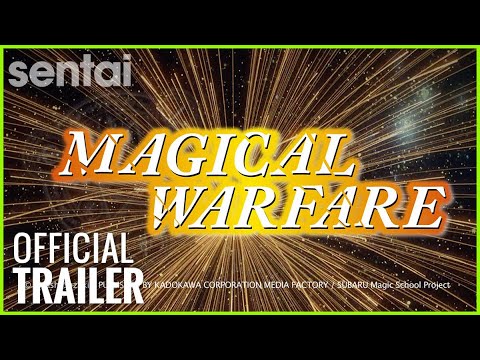