Episode 3 is live at TAN

Episode 4 is live at TAN

Ugh.
Does this get better or at least less boring later, or do I have to slog through it like I’m doing with Captain Earth right now?

IMO there’s some charm to it that sets it a tiny bit above the stereotypical mecha show, something that kept me somewhat interested despite it being “trope tastic”, but I have to admit that I’ve moved this one to the back burner as it wasn’t all that enthralling (fwiw, as I prefer binge to weekly watching anyhow).

Still, a mecha show where the young male lead is not sullen, arrogantly stoic or a total wuss is somewhat revolutionary.

There was nothing about this show to let me last beyond episode 3… so you made it farther than I did Coffee. Nothing about the story makes me want to keep watching it. At least the other two mecha shows on my list have an interesting enough story to keep my attention.

The conspiracy element night have some potential but I’m not setting my hopes very high. I’d definitely give this the easy-to-earn “better mecha show than aldnoah” award though.

Guy who forces himself, despite lacking aptitude, to be a mech pilot for an ulterior motive > yet another group of sullen kids saving the world “because reasons”. Argevollen also has much less psuedo-science babbling than many a mecha show. So…

Interesting, I find Aldnoah to be much better than this show.

I’m not saying that this show is ultra amazing, and I’d be lying if I said that I weren’t biased towards it because it is a Sentai release. I’m just not feeling the aldnoah though. The premise is cool but the execution doesn’t appeal to me.

Except for a 5-minute show, every show I dropped so far this season was a Sentai licensed show. So I have no bias it seems

Hell, this show I waited until it hit here before I bothered watching, and didn’t last that long.

Episode 5 is live at TAN

Episode 6 is live at TAN

Episode 7 is live at TAN

Episode 8 is live at TAN 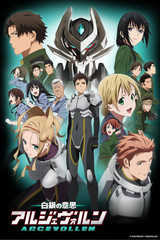 The Kingdom of Arandas alliance and the Countries Unification of Ingelmia have been at war for many years. The situation has been at a stalemate across the fortress of the Great Wall, which has never been penetrated since the foundation of Arandas....

ARGEVOLLEN will be taking a break on 9/25, but be sure to check back when it returns on the following week!

Hmmm…
So it has its moments, but on the whole, I really just can’t get into this series.

I think there’s more to the story of his sister than is presented.
And it also seems a bit odd, her relationship with Samonji seems much deeper than a superior/subordinate stance.

Episode 9 is live at TAN

Episode 10 is live at TAN

Episode 11 is live at TAN

Episode 12 is live at TAN