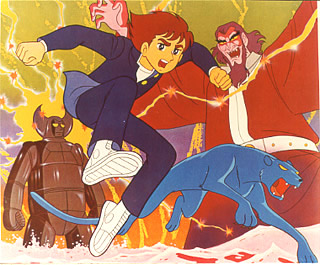 Genres: action, adventure, science fiction, supernatural
Plot Summary: Koichi Kamiya is a normal student, but one day, a mysterious voice wakes him up from his dream, and asks him to fight against evil in the name of Babel II. The next day, he meets Juju, Wong and the powerful Lord Yomi, who is trying to gather a powerful group of people with psychic powers to take over the world. But first, he needs Babel’s Legacy, a tremendous power which can only be used by Babel’s succesor, and this succesor is, of course, Koichi. With the help of Rohdem the black panther, Robross the giant bird and Poseidon the giant robot, he will protect the Earth from Yomi’s evil forces.
Number of episodes: 13
Vintage: 2001-10-06 to 2001-12-29

Reminder: This show expires from the Online Player on Friday, April 22.

It’s FREE to watch, so if you haven’t seen it, now’s the time!