Girl cosplaying as Mako gets an epic win on the mannequin challenge for actually doing something in character.

Calling all #Houston natives: If you're interested in the #GuPderfilm we're having a viewing at Alamo Drafthouse. https://t.co/HsD8sqN71l

On the weekend before Thanksgiving, the girls of Oorai panzered into theaters across the United States. Even better? We’re still planning on rolling out more showings into 2017.

Once upon a time, long ago in October 2016, the Sentai Filmworks crew departed for AkibaFest in Los Angeles. However, this was no ordinary festival, for this was the day we unveiled new Girls und Panzer merchandise, including Sentai-exclusive posters, t-shirts, and button packs.

91 Likes, 1 Comments - Sentai Filmworks (@sentaifilmworks) on Instagram: “The #dab is strong with this one #gupderfilm #garupan Did anyone else do the Girls und Panzer der…”

The #dab is strong with this one #gupderfilm #garupan Did anyone else do the Girls und Panzer der Film gif booth at #akibafest? #sentaifilmworks #girlsundpanzer #anime #animegirl #otaku #gif

Fans also got to take home a personalized piece of the action in our one-of-a-kind .GIF booth:

Opening with a Bang in San Francisco’s New People Cinema

Time passed, and soon, the big day arrived. On November 18, 2016 at NEW PEOPLE Cinema in San Francisco’s historic Japantown, fans arrived to find cosplayers and swag bags waiting for them. Inside these one-day exclusive bags hid buttons, manga art shikishi boards, and stickers; treasures that were exclusive to the Sentai Filmworks premiere event.

225 Likes, 0 Comments - Sentai Filmworks (@sentaifilmworks) on Instagram: “Thank you to everyone who came out to the premiere last night! Enjoy your goodie bags and, as…”

Thank you to everyone who came out to the premiere last night! Enjoy your goodie bags and, as always, #PanzerVor. For the folks who couldn’t join us, please enjoy our presentation of Girls und Panzer Der Dab. #dab #garupan #gupderfilm

125 Likes, 0 Comments - Sentai Filmworks (@sentaifilmworks) on Instagram: “VIP badges in hand, the lucky few who made it to the San Francisco premiere watched the battle…”

VIP badges in hand, the lucky few who made it to the San Francisco premiere watched the battle rage, enraptured by the girls und tanks und things exploding. #GuPderFilm #senshado #tankery #garupan #moviepremiere

The screening concluded with a Q&A session with English ADR Director Kyle Colby Jones. Before that though, we might have caught him and the cosplayers in mid-#MannequinChallenge

159 Likes, 0 Comments - Sentai Filmworks (@sentaifilmworks) on Instagram: “Some of the cast for the from #GuPderfilm. Thank you so much for coming out tonight. The fans had…”

Some of the cast for the from #GuPderfilm. Thank you so much for coming out tonight. The fans had so much fun! #sentaifilmworks #girlsundpanzerderfilm #girlsundpanzer #gup #tanks #anime #otaku #va #voiceactors

Fans got to hang out with members of the English Girls und Panzer der Film cast, including (from left to right) John Swasey, Caitlynn French, Jessica Calvello, and Tiffany Terrel. After a post-movie Q&A session, fans had the opportunity to get their swag items autographed by the cast!

###More Panzer to Come! Stay Alert for a Showing Near You
We’ll update you on social media whenever we add a new theater to the list. Until, feel free to learn more about the movie, the voice actresses, and get your hands on #garupan merchandise all at www.girlsundpanzerderfilm.com. Until we meet again, PANZER VOR. 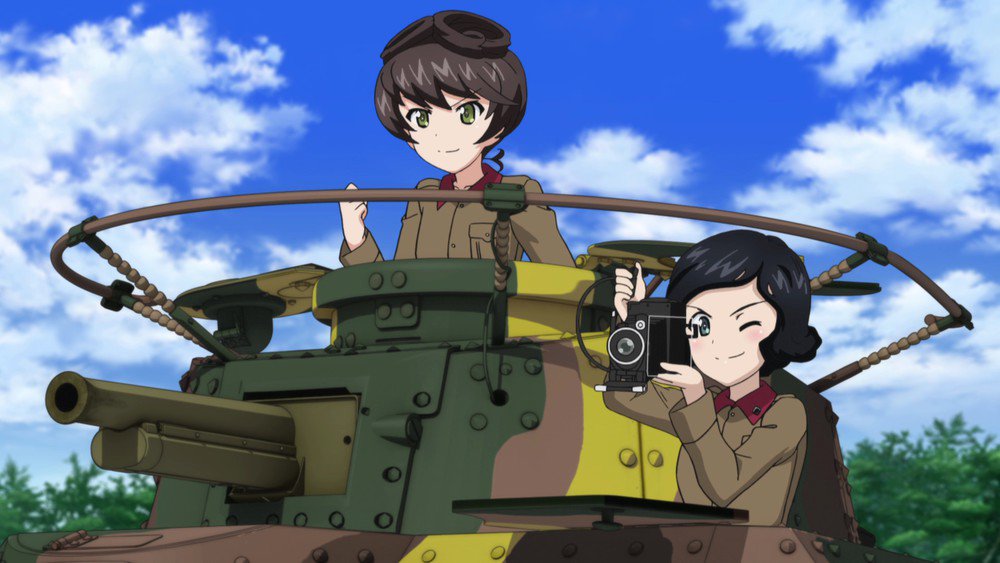 OK, so I went to Disney Springs and saw the 7PM showing tonight. It was a blast, I can see why it stayed in theaters so long in Japan. Parts are vertigo inspiring, wheee!

So far, the release of Girls und Panzer Der Film has sucked big time for those in wide stretches of the US. Here in Oklahoma, where I’ve been able to see Funi’s Ghost in the Shell the New Movie and where Funi has had a number of other theatrical releases that I wasn’t interested in or able to attend, it’s been impossible to see GuPDF. The “nearest” theaters to the Tulsa area are in Dallas or Omaha/Lincoln, NE! It’s no wonder the anime fans of NE Oklahoma have no clue of Sentai Filmworks!

A. Sometime this year.

This Is the Real Anzio Battle! Combo Cover/Disc Art

Q. Hello! So I really want to know when I’ll be able to buy girls und panzer der film English dubbed. Thanks!