Genres: adventure, comedy, drama, romance
Themes: bishounen, mafia, reverse harem, special abilities, Tarot Cards
Objectionable content: Mild
Plot Summary: (TAN) For years, the island of Regalo, has been protected by the Arcana Tarroco, whose success is due to the members’ unusual skills with Tarot Cards and more conventional weapons. Unexpectedly, the leader has decided to retire and that his successor will be the winner of a series of duels. Even more surprising, he throws his daughter Felicitiá in as part of the prize. However, Felicitiá has a few cards of her own up her sleeve! Prepare for mayhem when mixing the Bachelorette and the Sopranos with a crazy Gypsy fortuneteller in La Storia della Arcana Famiglia!
Number of episodes: 12
Vintage: 2012-07-01 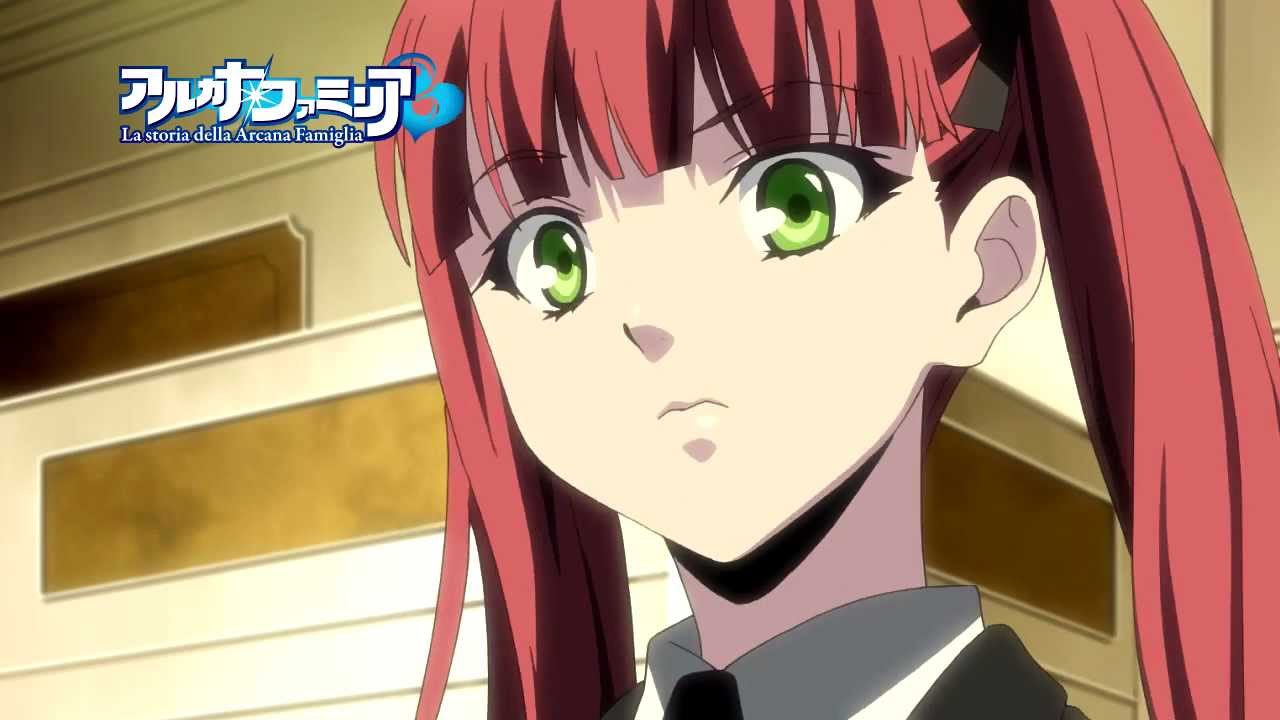 Though seeing as how it’s based off of a romance adventure game for female players, not sure how it’ll play out for us guys.

I’m not one to shy away from an anime because of its source material. So I’ll give it a shot, maybe it’ll be good, but who am I kidding with this “maybe” nonsense!

The title is Italian! So it must be good!

Ooo…I can already hear the corny, cheesy Italian/mafioso/Jersey Shore accent for the dub…

So far, not as fun as I thought it would be.
It’s not really bad, just not how I imagined it would be.

Hmmm…the description on the show page compares it to The Bachelorette and The Sopranos. I’ve seen a few eps of both The Bachelor and The Bachelorette, and the competitions are the only parts of them I enjoy. I’ve seen adds for The Sopranos, which is on a network I don’t subscribe to, and nothing about them has ever come close to appealing to me. Now that I’ve watched the first ep I might try hanging on through the series (mostly to see if Felicita can win the Arcana Duello herself), but I’m going to almost be forcing myself to attempt to finish it from what I’ve seen so far. An anime being compared to two such American shows (yes, that is a bad thing coming from me, there is some stuff that Hollywood makes that I like, such as NCIS, CSI, and similar types of dramas, but the reality type shows tend to leave me feeling the brain cells dying when I attempt to watch them) in such a manor as to imply it’s as good (again, for me that would be horrid) as them was a rather significant warning, and from the first ep it is a warning to take to heart. I’m not sure if the game it’s based on is any better (I’m positive it can’t be any worse), but unless the show improves a lot, and quickly, it’ll be one dating sim that I’ll consider myself heavily forewarned about playing (yes, I’m a guy who can actually enjoy a dating sim meant for the gals, a good story is a good story regardless of the slant it is told at), and I’ll probably end up waiting for the last two eps to just see how it ends and not subject myself to the abuse of seeing how it got there (and normally it’s how they get there that I enjoy the most).

Episode 3 (Sub) is live at ANO

Episode 4 (Sub) is live at ANO

Episode 5 (Sub) is live at ANO

Well, I’ve finally managed to get caught up to ep 3. It is better than I’d thought it was going to be after the first ep and the crappy description they gave the series. Aside from having more of a ‘reverse harem’ thing going (although not very strongly at this point) I really don’t see the supposed connection to The Bachelorette, and although I’ll admit that I don’t know jack about The Sopranos since the first ep I can’t say as I’ve seen anything that reasonably resembles what little I’ve seen of commercials for The Sopranos.

I will say though that the only reason this one has managed to get a pass at this point is I normally watch the first 4 eps before making a definitive decision regarding whether or not I’ll finish it, and although I’ll drop the extremely bad ones before then I don’t think I’ve ever dropped one after just the first ep.

Episode 6 (Sub) is live at ANO

Episode 7 (Sub) is live at ANO

Episode 8 (Sub) is live at ANO

Episode 9 (Sub) is live at ANO