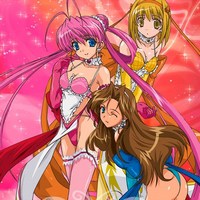 Plot Summary: We find the girls in town a year later going about their lives without any memories of their past exploits or ability to transform. Tsubomi is approached by Rama, the cat, who, at first, she does not understand. But the Earth, specifically the town of Akiba, is under attack by a trio of powerful alien women along with their minions. The explosions around her restore her memories and she reassembles the rest of the Papillon team to defend the town, eventually winning over the enemy with their charms as well as their magical powers.

In particular: the OVA came first, the rest of the first season does not exist, and “Papillon Rose: The New Season TV series” is set one year after the rest.

Hey I just watched the OVA on hulu today and while I knew the Animation was older then what usually streamed I gotta tell you this program had me feeling like I had the misfortune of watching a hetai from nutech digital without the sex and fan service of an actual hentai.
The Animation was stiff and slow the dialog was pitchy and the voice acting was was all over the place and most time’s over the top, just like those horrible nutech hentais.
Now I knew that it would be a fan service spoof of Sailor Moon and the other magical girl shows that inspired it but I was hoping that it would be more like today’s fan servicey series like Samurai Girl’s, Sekirei, Queen’s Blade, Qwaser of Stigmata where the Animation moves with more fluidity.

Only the TV series, or will the (Might as well be X rated) OVA be coming to HiDive as well?

If you read the announcement, it says the series. Don’t think the OVA is included.

That’s why I asked. The article didn’t mention it, and just wanted to clarify.

Oh… you know, I didn’t mean to sound snippy. Just re-read my answer.

The other PR for Waiting in the Summer specifically mentioned the OVA, so I guess I was thinking about that also.

I was a little worried my original post sounded uncouth…

Watch episodes of Papillon Rose right here on HIDIVE. Start a 14 Day FREE Trial, and enjoy all of the Premium Membership perks!