Yay! Villainess is getting a physical release, by Sentai nonetheless!!!

You do know that probably won’t happen for about a year, right? Also we should be getting back the antitrust verdict from the government by then. The only way I see them approving the sale is having them remain separate companies, and doing the sub / dub split like they had before. There’s going to be concessions one way or another if it gets approved.

You do know that probably won’t happen for about a year, right?

Let me just keep my hope for the time being…

[TOMORROW] Our first official Sentai podcast launches first thing tomorrow morning! Be sure to check back for more details! Can you guess what show we will discuss? https://t.co/QDFEvH9S6M
2 Likes
Slowhand May 25, 2021, 3:18pm #1787

The ramshackle basketball team that Sora Kurumatani’s love for basketball forged from a collection of juvenile delinquents and random high school archetypes has made it past their initial training and practice games, but are they ready to compete in a real tournament? They’ll find out as they face off against the far more seasoned and experienced team from Shinjo Towa Academy. But even if they dig down and find a way to play better than they’ve ever played before, there are more teams ready and waiting in the wings, including the relentless squad from Yokohama Taiei. The drama is intense both on and off the boards, as tensions fly, members of the fledgling team start to crack, and Sora’s own situation hits a point that may tear the team apart in the second spectacular collection of AHIRU NO SORA!
Rating: TV-14 (L,V)

In the deadly underground world of no-holds-barred fighting, one name reigns supreme: Yujiro Hanma, aka “The Ogre,” a legendary martial artist whose incredible strength, skill, and savage ferocity are so terrifying that even great nations fear him. Still, no man can stand at any pinnacle forever, and the Ogre’s son, Baki, has trained his entire young life in order to achieve his dream of rising to the top. Unfortunately, the young fighter’s escalating string of victories make him a target for the most ruthless of rivals, and an underground martial arts promoter warns him that five ultra-violent convicts are en route to Tokyo to eliminate Baki once and for all! Now, with the lives of his friends and classmates at stake, the young fighter must face his greatest challenges yet, both inside and outside of the ring, in BAKI!
Rating: TV-MA (V)

Made in Abyss Theatrical Collection (Steelbook)

Anyone can descend into the Abyss, but few who survive the massive, multi-leveled pit’s dangers make it back unravaged by madness and nightmarish physical transformations. Still, when 12-year-old Riko learns that her missing mother may be alive in the Abyss’ inky depths, she and her friend Reg decide to brave the ultimate darkness in the astonishing twin feature films that recap the acclaimed TV series, MADE IN ABYSS. But as harrowing and gut-wrenching as those adventures may be, the tensions will only continue to mount. Because now Riko, Reg and Nanachi must ford seas of corpses, survive fields of parasitic insects, and confront the most potentially dangerous entity of all, Bondrewd, the body shifting guardian of the gate to the sixth level, in the all-new feature length masterpiece - MADE IN ABYSS: DAWN OF THE DEEP SOUL!
Rating: TV-MA (S,V)

Looking for a new way to fill your morning commute or keep you company around the house? Introducing the Sentai Podcast, your one-stop shop for all things Sentai anime!

Join hosts Sam and Jay as they talk about Sentai’s latest and greatest shows, including MADE IN ABYSS, VINLAND SAGA, NANA and so much more. Episodes air every other Tuesday, and you won’t want to miss them — starting with episode 01, which just dropped today!

From interviews with cast and crew to thoughts on our favorite titles, fans new and old alike will find something to love in these episodes.

Got a question for our hosts? Tweet @sentaifilmworks for a chance to have your questions answered on air!

For more information and to listen to the podcast, check out this link!

“First time jitters” and what have you, hopefully they’ll grow more comfortable as the episodes continue.

The explosion of America's anime market won't surprise die-hard fans of Japanese animation, but its long roots in Texas just might.

Mikoto Urabe might be an anti-social loner who sleeps on her desk, carries scissors in her underwear, and laughs insanely for no apparent reason, but when Akira Tsubaki comes into contact with her saliva, he finds himself inexplicably addicted to her. And if that’s not an unusual enough basis for a relationship, what’s even weirder is that not only does Urabe seem to find this twisted state of affairs to be completely normal, but she already appears to have plans for her new friend! But can a girl having great expectorations for you be a good thing? Find out as Urabe puts a spittle love in Tsubaki’s heart and things get REALLY bizarre as “sharing spit with a girl” takes on an entirely new meaning in the most dysfunctional bodily functional anime ever: MYSTERIOUS GIRLFRIEND X!
Rating: TV-MA (D)

Sora Kurumatani is short and as scrawny as a stick figure, but he loves basketball with a burning passion. Unfortunately, on his first day at Kuzuryu High, he learns that the school’s supposed basketball team is nothing of the sort. Instead of a haven for aspiring athletes, the gym has become the home turf for a gang of thugs, delinquents and perverts whose only skill at dribbling involves drooling on the floor while peeking into the girls’ locker room. But since Kurumatani has to play to fulfill a promise made to his ailing mother, he’ll have to take these sour lemons and squeeze-play out a winning basketball team somehow. Impossible? Perhaps. But with the help of a counselor and members of the girls’ club, he’ll do his best to get them all on the rebound in AHIRU NO SORA!
Rating: TV-14 (L,V)

Four years ago, a mysterious gate to another world suddenly appeared, allowing malevolent creatures called “Neighbors” to invade Mikado City! Impervious to normal military hardware, the Neighbors seemed unstoppable until the Border Defense Agency turned the tide with a new form of weapon called a “Trigger”. Now the Neighbors are still here, lurking, while young Osamu Mikumo, one of the BDA’s latest Trigger trainees, is under orders to not use his new abilities…. orders that Osamu violates when he sees a new classmate being dragged into a Forbidden Area! Instead of staging a rescue, however, Osamu is stunned to see the boy defeat the Neighbors by himself! Who is Yuma Kuga, where did he get his powers, and is he some form of Neighbor are just the first of many mysteries that Osamu will have to solve in WORLD TRIGGER!
Rating: TV-PG

Becoming the significant other of an alien Princess has been hard enough on Rito Yuki, but just as he’s starting to cope with life with Lala, their domestic “bliss” is torn asunder when not one but TWO more princesses are dropped into the mix! Needless to say, having Lala’s sisters, Nana and Momo, transfer to Earth is a recipe for disaster, especially after Momo decides that the way to horn in on Rito’s relationship with Lala is to bring in even more girls! And, of course, this is the point when galactic scourge Yami, the Golden Darkness, decides to pop by with an army of possessed high school students! Now it’s no longer a question of whether Rito will last to the end of the week, but whether Earth itself will survive the ultimate romantic cataclysm in TO LOVE RU - DARKNESS!
Rating: TV-MA (D,S)

The Queen’s Blade tournament may be over, but the stories of the feisty feminine fighters continue in a scintillating collection of bodice-ripping, chest heaving yarns that will leave you breathless! First, the surviving sword maidens scatter across the lands seeking fame and fortune! With that additional exposure, however, come new dangers: witches, tentacle monsters, and even each other! Then, when the once-noble Queen Claudette’s ways seem to have turned to oppression and persecution, a new generation of warriors must take up their naked blades! Baring their fury in open rebellion, an unprecedented force of femme fatales come together with the goal of stripping the evil queen from her throne! If a heart of gold lurks in the breast of the noblest warriors, prepare to bear witness to a treasure trove of improbable magnitude in the QUEEN’S BLADE - REBEL WARRIORS COLLECTION!
Rating: TV-MA (D,S,V)

Becoming the significant other of an alien Princess has been hard enough on Rito Yuki, but just as he’s starting to cope with life with Lala, their domestic “bliss” is torn asunder when not one but TWO more princesses are dropped into the mix! Needless to say, having Lala’s sisters, Nana and Momo, transfer to Earth is a recipe for disaster, especially after Momo decides that the way to horn in on Rito’s relationship with Lala is to bring in even more girls! And, of course, this is the point when galactic angelic muffin Yami, the Golden Darkness, decides to pop by with an army of possessed high school students! Now it’s no longer a question of whether Rito will last to the end of the week, but whether Earth itself will survive the ultimate romantic cataclysm in TO LOVE RU - DARKNESS!

Fixed that for ya…

Sadly, I see a beating in Maou’s immediate future from a galactic angelic muffin…

@SentaiFilmworks
[COMING SOON!] Sentai at Home is back! Mark your calendars for August 20th! 😎 Get notified: loom.ly/gnGJKwo https://t.co/MfeQbzLMrb 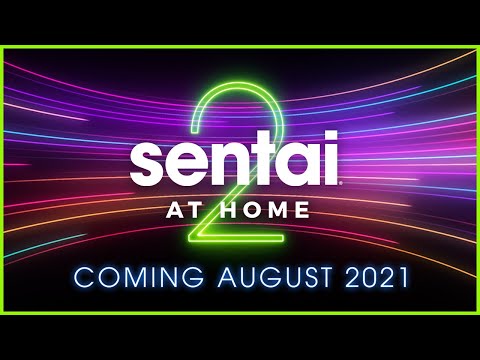 Join Sentai for a reprisal of last year’s Sentai at Home, a celebration of all things anime that brings the convention experience to anime lovers at home! Join us on Friday, August 20, 2021 for interviews with special guests, giveaways, sneak peeks and more.

In case you missed Sentai at Home last year, we held our first-ever digital panel experience that brought anime fans together from around the world. This year we’re ready to up the ante and take the event to a new level with even more exciting content for the worldwide anime community to sink its teeth into.

For information about Sentai at Home, please visit athome.sentai.com

@SentaiFilmworks
Welcome Chinedu to our Sentai at Home event! Chinedu is an anime loving comedian and we can't wait to see what he has in stored for y'all! Mark your calendars for August 20th! @ChineduOgu https://t.co/1jDpATXAng 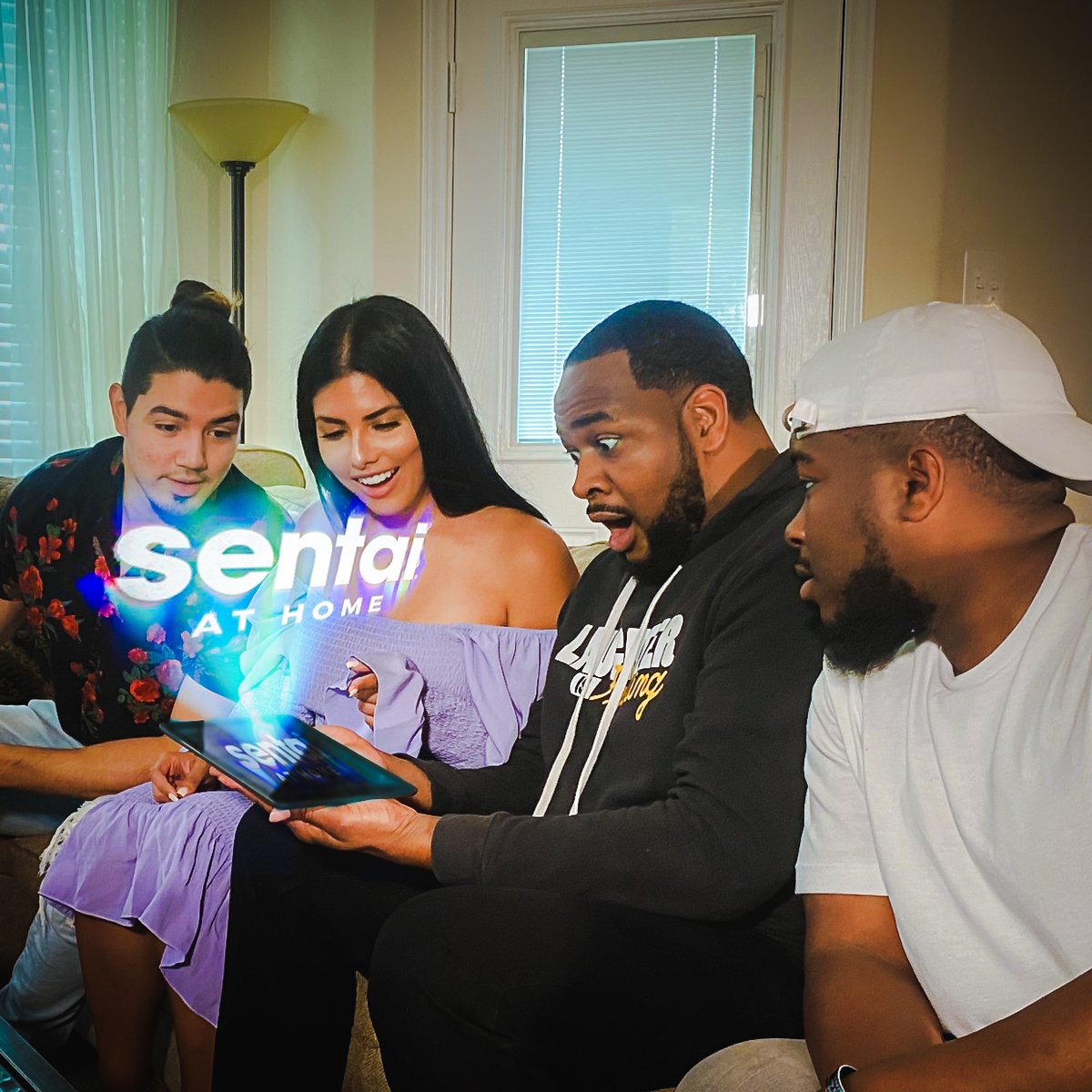