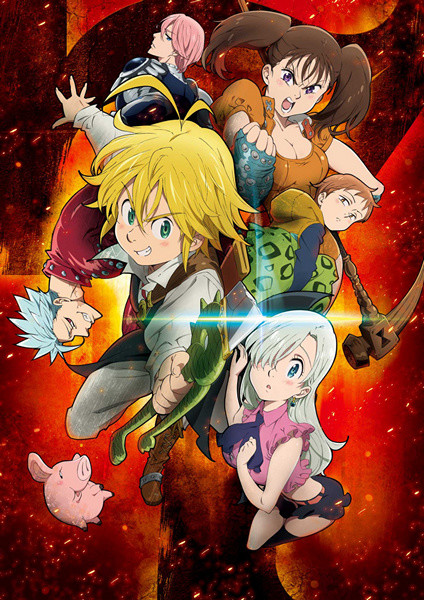 Genres: adventure, comedy, drama, fantasy
Objectionable content: Significant
Plot Summary: In a world where humans and non-humans have not yet been separated, the kingdom of Leones is protected by the Holy Knights, powerful magic users both revered and feared by the people. Supposedly the strongest, most fearsome of these knights, the Seven Deadly Sins, betrayed the kingdom and made enemies of all the other knights. Queen Elizabeth doesn’t believe this story, and sets out to find the Sins - but when she meets the first Sin at a tavern, his name is Melodias, and he’s nothing but a boy in charge of the pigs.
Number of episodes: 24
Vintage: 2014-10-05

Genres: adventure, comedy, fantasy
Number of episodes: 4
Vintage: 2016-08-28 to 2016-09-18
Plot Summary: Taken the kingdom of Leones back from Holy Knights, the Seven Deadly Sins, along with Elizabeth and Hawk, can finally enjoy peaceful lives they earned. However, with premonitions of a new threat are looming, their happy, ordinary days are about to end soon.

The Seven Deadly Sins: Revival of The Commandments / Nanatsu no Taizai: Imashime no Fukkatsu

Genres: adventure, fantasy
Plot Summary: Melodias, Hawk, and Elizabeth retook the Kingdom of Leones from the Holy Knights. The festival went off without a hitch and the crew enjoyed their well-earned peace. And yet, another threat looms on the horizon. The Ten Commandments, a group of elite demon clan warriors, have their sights set on the kingdom.
Number of episodes: 24
Vintage: 2018-01-06

The Seven Deadly Sins: Wrath of the Gods / Nanatsu no Taizai: Kamigami no Gekirin

Retailer: 2nd The Seven Deadly Sins OVA to be Bundled With Manga

The Seven Deadly Sins Manga Gets New TV Anime in 2016

Aww, no Vic, Cherami, “Haberkreeper” or any of the other TX VAs who went out to CA?

The last time I heard Cason direct Bryce it was alright. Maybe I’ll give this a shot.

I checked out the show dubbed. The dub is surprisingly solid (Chris Cason should direct more Bang/Zoom dubs) but I missed the memo that this is designed to be a kids’ show.

but I missed the memo that this is designed to be a kids’ show.

Err, what? I haven’t had time to check out the anime yet, but really, it’s a kids show? The current point of the manga is much too dark to be consider a kids show (unless you 4Kids the story)

It seemed like it to me. Maybe it gets down to business after episode 1?

Actually, I’m not sure the “Akame Ga Kill-esque” stuff is in the anime, IIRC (which is never a good thing to go by) by the time that type of stuff starts to appear, it would be after a break in the manga to make a good stopping point for the anime to reach in a season.

As I only watch Netflix stuff on my tablet, and I haven’t had time to watch stuff on there over whatever I do watch on a computer… (My tablet is basically a manga reading device now, been too tired by the time I get around to using my tablet to read manga, so I get a little bit behind)

I stumbled on this one via Netflix, good so far. I swear, I recognize the voice of that pig…

I swear, I recognize the voice of that pig…

The show is kinda fun to watch, but this really could have been on Toonami back when it was an afternoon programming block for kids. Take away the stereotypical Japanese perviness and this might struggle to even get a “TV Y7” rating lol.

I don’t know, episode 2 had that young (looking) guy taking advantage of the situation to the fullest extent