Plot Summary: Kasuga Arata lived a normal life together with his childhood friend, Hijiri Kasuga, in a small town. However, everything changed on the day of the Black Sun, and a magician appeared before him. The Black Sun caused the Breakdown Phenomenon which destroyed the town where he lives. Because of this, his normal life was artificially reconstructed by a grimoire that his childhood friend had left. The appearance of the magician led him to a new life in the Royal Biblia Academy and meeting the members of the Trinity Seven. (from Wikipedia) 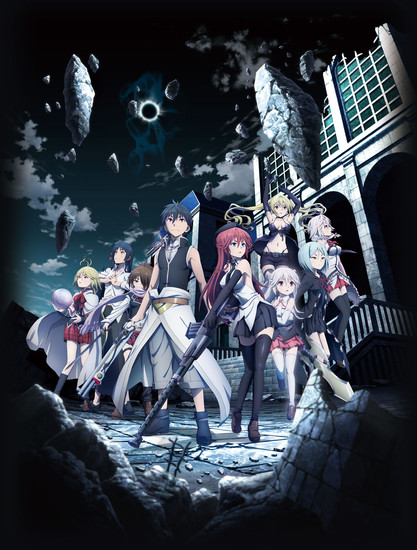 Plot Summary: Arata inadvertently touches “Hermes Apocrypha,” Lilith’s Grimoire. Suddenly, he is enveloped by a bright white light, and a girl appears before him. She calls herself Lilim, and treats both Arata and Lilith as her parents. At the same time she appears, something changes in the world. The forbidden Eternal Library awakens. In the Library is sealed the ultimate culmination of Alchemy, the White Demon Lord. (from ANN)

School Fantasy Manga Trinity Seven Has Anime in the Works

It’s almost as if he knows he’s a Harem protagonist.

He’s a lot better than most but he still has a long way to go to achieve Aesthetica of a Rogue Hero level manliness. Perhaps the dub can give him a boost.

Dunno about this one: the animation definitely needed more money poured into it and I’m not really much for the char designs.

Why Arata is better than most male harem leads:

Sentai, is there something you’re not telling me? I thought we had a good enough relationship that you’d come clean on this one…

Funded by the government?

Funded by the government?

Well that took a while, still it’s nice to see this one get licensed.

What kind of crazy licensing was going on that there was a poster that said Sentai had this almost 10 months ago? And Sentai just now are saying they have it?

More than likely their contract with TV Tokyo had some clause that they couldn’t officially announce it until close to release, or CR had exclusive streaming rights for a year and they didn’t want to announce until they could stream it.

What kind of crazy licensing was going on that there was a poster that said Sentai had this almost 10 months ago?

Q. I was wondering if Trinity Seven will be dubbed because I was looking at the preorder for the DVD and saw that will be in English & Japanese with English subtitles?