Time of Eve / Eve no Jikan

[quote]Genres: drama, science fiction
Themes: androids, café, roboethics, robots
Objectionable content: Mild
Plot Summary: In the not too distant future androids have come into common usage. Taking the androids for granted, humans treat them as if they were common everyday tools, while on the other hand, some people empathize with androids due to their human-like appearance (save for a digital ring floating above their heads). This has become a social problem and these people are frowned upon as a result. Rikuo, one who has taken androids for granted for his entire life, one day discovers that Sammy, his home android, has been acting strangely and finds a strange phrase recorded in her activity log. He, along with his friend Masaki, traces Sammy’s footsteps and come upon an unusual café. This cafe’s main rule is to not discriminate between humans and androids.
Number of episodes: 6
Vintage: 2008-07-31 to 2009-09-19[/quote]
ANN Info Page

As episode 4 is due out today after a couple of months delay, I thought I’d point you all in the direction of one of the best anime I’ve seen. It excels in terms of music, animation and story, so watch it! 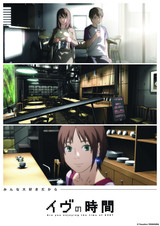 Time of Eve - Watch on Crunchyroll

"Time of EVE" is the latest work by Yasuhiro YOSHIURA, director of "Pale Cocoon" & "Aquatic Language". The series, produced by Studio Rikka & DIRECTIONS, Inc. released in 2008-2009. A 2013 Kickstarter to fund the global release of “Time of...

Episode 5 is now available on Crunchyroll, so I continue my campaign of bothering everyone into watching it.

I love how it takes after Isaac Asimovs “Irobot” Trilogy. The book, not the dumb movie that should not have that name.

Time of eve is really good and explains it easily about the Three laws of robotics. Plus it is a bit heartwarming.

So after a year, the 1st season of 6 eps is finally complete O.O

Watch and enjoy, I know a few of you have been waiting for it to complete before starting.

Hmmm… The pictures of this reminds me of “Pale Cocoon”. I guess since they were made by the same studio that makes sense. Anyway this always looked kinda interesting, is it worth it? While I enjoyed “Pale Cocoon” (it was a smart, slower paced movie with a good ending), I don’t think it’s a masterpeice or anything. Still if this TV series is anything like that I may like it. So is this worth watching?

I think you would enjoy it Prede. I’ve not seen Pale Cocoon, but I believe that this was done by the same director. I thought the story was very good and I liked the characters. And the music is lovely. I do think it is worth watching.

You Should Watch TIME OF EVE Because… | Q Review