Plot Summary:
Princess Valkyrie crashlands on Earth like any other alien, except she lands on Kazuto, a small time bath-house owner. To save him from death she gives him part of her soul. However loaning your soul does have its ups and downs. Having halved her soul Valkyrie has reverted into her child self. Kazuto and friends, with a spaceship crashed on his bath-house, must now deal with everyday challenges and trouble while trying to figure out how to get Valkyrie back to normal… including more crash landings. 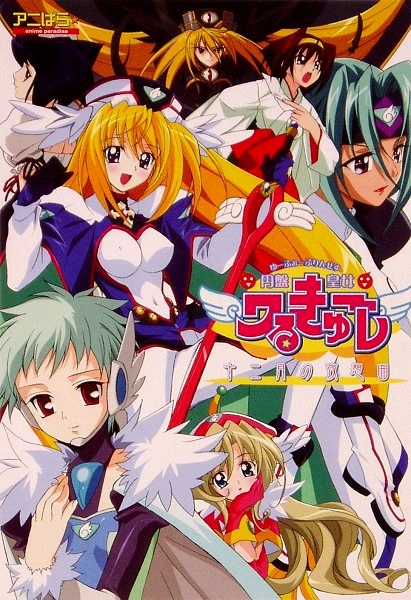 Plot Summary:
Valkyrie, Kazuto, Akina, Hydra and friends are back for more when the Key of time suddenly appears along with many other mysterious happenings. All seemed to be linked to a person named ‘Valkyrie Ghost’ who’s only goal is stealing Kazuto for herself. As they team up against this seeming unbeatable foe they dig deeper into the mysterious past of Valkyrie’s home planet, Valhalla.

I just finished up my backlog on this series not too long ago.
I actually still love it just as much as when I saw it on SVOD, and I’m really glad I bought this series now.

I just finished the latest UFO S. 2 episode 7 from the recent update… pretty good episode with the clone providing more of a love triangle type angle to the series. Season 2 still feels to me, as I’ve said before, sort of like an extra OVA to the series. It’s as if they resolved the main drama and story aspects in season 1 and 2 is more of a show just as an excuse to see one’s favorite cast members again. But I’m still waiting for that defining moment in Season 2, it just feels like a watered down season 2 so far in my opinion. Not that there’s anything wrong with that, still fun and very entertaining, but Season 1 was a really special one for me.

On the note of the YT video… how I miss ADV’s Trailers that they used to do for their Anime Network podcast/VOD updates. ADV always had some of the best Trailers in the industry. I miss it and Luci Christian’s voice.

This is on my list of Anime to get eventually. This is not a show that I can watch with the wife. It more a matter of seeing how it ended.

Last time I checked that was a very low possibility of the entire UFO Ultramaiden Valkyeir being shown on Paid VOD or OVA.

Just watched season two eps 7-8. Interesting that the songs were left Japanese for the dub version in episode 7 - are they subtitled in the DVD?

I laughed out loud at what seems like it could be an unintentional double entendre in episode 8. When the head maid is having her delusions, the last one with all three Valkries, they tell her they’ll take her to heaven to love her body and soul. To which she says something like that she’ll come right away. I’ll bet.

Just watched season two eps 7-8. Interesting that the songs were left Japanese for the dub version in episode 7 - are they subtitled in the DVD?

They are indeed subbed on the DVD, with both Japanese romaji in white and English translation in yellow under it.
They also have character specific Video Jukeboxes on the various DVDs with the seiyuu singing various songs which are also subbed similarly. As a matter of fact, DVD 1 of season 2 has a video jukebox of little Valkyrie’s song from that episode “Suki-Suki-Suki wa na Kanji”.

I laughed out loud at what seems like it could be an unintentional double entendre in episode 8. When the head maid is having her delusions, the last one with all three Valkries, they tell her they’ll take her to heaven to love her body and soul. To which she says something like that she’ll come right away. I’ll bet.

Yeah, I couldn’t help but laugh at that part as well.

Episode 8 with the picnic in the snowy surroundings was indeed quite humorous… might be my favorite episode of this season so far. The only problem was… not enough Laine hijinx.

this show does not make me feel good about life

You know, I’m all for differing of opinions, but must you subject the rest of us to unrelated imagery to go along with your opinions?

That looks like it belongs in a Pani Poni Dash thread.

no, it’s just my way of symbolizing my dismay for a particular anime.

[quote=TommyTwoTacos]
no, it’s just my way of symbolizing my dismay for a particular anime.[/quote]

Stop using images and use your thought out words.

This is one of the times that Tommy is wrong. Chiyo-chan’s dad disapproves of you most strongly Tommy! Go to your room. :silly:

Really I don’t know how you can just label it fail, okay it’s not like an all time great work, but you could make a long list of terrible shows before you got up to this one.

The show is cute although there’s a squick factor in Kazuto kissing a 6 year old Valkrie in a romantic way. But if you remember “She’s really 700 years old” (well, 18 or so I guess) is part of the premise of the show I guess it’s not so bad. (they show that pretty well in the open of the show, I guess it’s safe to mention).

the show gets the fail rating from me for it’s cliche triteness and piss poor animation. It’s not Funny Pets, but it’s pretty bad. Like, Naruto bad…

[quote=TommyTwoTacos]
the show gets the fail rating from me for it’s cliche triteness and piss poor animation. It’s not Funny Pets, but it’s pretty bad. Like, Naruto bad…[/quote]

You’ve failed twice Tommy. How uncommon of you.

Naruto and UFO Ultramaiden Valkyrie are at least above average to good shows by any fair and technical measure. Personal tastes are your barometer in this case.

it may be I’m swayed by the saturation of the animation style, or the lack of original nuance in the writing, but nothing really distinguishes this show from the dozen precursors this show spawns from.

[quote=TommyTwoTacos]
it may be I’m swayed by the saturation of the animation style, or the lack of original nuance in the writing, but nothing really distinguishes this show from the dozen precursors this show spawns from.[/quote]

That’s true but eh once you’ve seen 100 shows you almost have seen them all… and I’ve seen a lot of these types of shows, both in the case of UFO Ultramaiden and Naruto.

There’s really not much new under the sun anymore, and those that are, usually are sales disappointments, sadly.

Personally I enjoy both UFO and Naruto, both are better than given credit for, not art or a masterpiece certainly, but tons of fun with entertaining characters.

Edit: Tommy your last post was deleted. Enough with the image postings. You’ve already stated that in the last page when PP told you enough. It doesn’t add to the conversation, certainly not more than it already has.

How about a specific example of why it’s bad?

Watched the next episode tonight. Even the characters complain about the plot at one point -

You know as I was watching this week’s episode 9, I was thinking this was a bit on the superfluous side… but on the other hand I was smiling all the way through (believe it or not every second of this episode!) and enjoying the episode immensely.

Of course, I do very much enjoy the characters of Akina and Hydra (certainly the English VAs in Cynthia Martinez and Nancy Novotny) are always more than welcome – which was this episode’s focus. This is another aspect I enjoyed more in Season 1, there just seems to be more relationships touched on in that one, than in this next season. I understand that a lot of these aspects were already resolved in the first season though… and…

I still feel this season is weaker than the first one… there’s not as much story and substance. It really just does feel to me like the production team thinking… oh here’s just another excuse for you fanboys to see more of the characters you like. Again, not that I’m complaining, I’m more than happy about this. Reminds me of the Steel Angel Kurumi and Nadesico issue… But, there’s no drama, tension, depth and plot movement that I keep waiting for like in Season 1… and now there’s only 3 episodes to go to resolve the Valkyrie’s Ghost matter.

Anyway I’m a broken record about this I’m sure ;), but I’ll still be waiting for some sort of climax within the context and realms that this series allows for its second season.