Genres: action, adventure, science fiction
Themes: mecha, super robot
Objectionable content: Mild
Plot Summary: Golion, a powerful sentient robot, abuses his great powers by attacking and killing creatures known as Deathblack Beastmen, boasting that no one could defeat him. A divine space being punishes Golion for his arrogance and abuse by seperating him into 5 different lion robots. In the year 1999, a group of 5 young men return to Earth after a space voyage, only to find it ravaged by nuclear war. After encountering the alien race known as the Galra, the 5 youths end up on the planet Altea, and learn that the 5 lion robots that Golion was split into are in hibernation in various parts of Altea. Somehow, they must reunite the lions and form Golion, the only hope for the human race.
Number of episodes: 72
Vintage: 1984-09-10 to 1985-11-18 (U.S.) 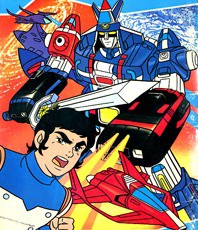 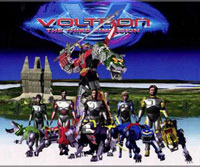 Genres: action, adventure, science fiction
Themes: mecha
Objectionable content: Mild
Plot Summary: Five years have passed since Voltron destroyed the Fleet of Doom. The Voltron Force have gone their separate ways since then. But when a band of space pirates wreaks havoc across the galaxy, they soon discover that the evil Lotor - now a cyborg as a result of his injuries sustained from the last war - has escaped from prison and is leading the pirates to avenge his defeat. Keith, Lance, Pidge, Hunk and Allura must once again pilot the Lions and form Voltron to combat the new threat.
Number of episodes: 26
Vintage: 1998-09-12 to 2000-02-19

Genres: action, science fiction
Themes: giant robot, mecha
Plot Summary:Three young cadets will learn what it takes to fight alongside the galaxy’s greatest heroes and pilot incredible robot lions. Voltron will be needed once again to combat a rising evil in the galaxy, and a tyrant from within. Bonds will be formed, friendships will be tested as the Voltron Force gels together as a team in an epic battle of good versus evil.
Number of Episodes: 17
Vintage: 2011-06-16 to 2012-04-25

Plot Summary: For millennia, the evil Galra empire has plagued the universe by destroying other civilizations and enslaving various races. The only known threat strong enough against the empire’s power and plans is the legendary “Defender of the Universe” Voltron, a 100 meter tall robot warrior composed of five lion mechas whose pilots are known as the Paladins. At the crux of the war that ended with the destruction of planet Altea, Voltron was separated by King Alfor of Altea in order to protect Voltron from falling into the Galran Emperor Zarkon’s possession. King Alfor bonded the five lion’s energies to his daughter Allura’s life force and sent them across the universe to different locations until the time for the next generation of Paladins to appear and pilot Voltron arrived. Princess Allura, her retainer Coran, and the Altean Castle of Lions were hidden on planet Arus along with the Black Lion.
In the present, the Galra Empire’s path of conquest and search for Voltron has led them to Earth’s solar system. A group of space pilots – Shiro, Keith, Lance, Pidge, and Hunk – discover the Blue Lion and immediately get swept up into the Galran War. They meet Princess Allura, become the next Paladins, and reunite the five lions to form Voltron and combat Emperor Zarkon’s nefarious schemes, with the hopes of ultimately defeating the entire Galra Empire.

Man, I love Peter Cullen’s voice. It has such a narrative quality.

By the way, Golion’s original storyline was quite good.

As for Dairugger, I enjoyed the Voltron version quite a bit.

There is a marathon of ALL episodes of Voltron Force tomorrow, Sunday, November 26.

Ending with a NEW episode:

This show is total guilty pleasure for me. It reallt takes me back when I was a kid…
:laugh:

March 11, 2016 9:50pm CST
Dreamworks and Netflix were combining to form the mecha guardian of the universe