Avatar: The Last Airbender / The Legend of Korra

Avatar: The Last Airbender, known as Avatar: The Legend of Aang in some regions, is an American animated television series produced by Nickelodeon Animation Studios. It was co-created by Michael Dante DiMartino and Bryan Konietzko, with Aaron Ehasz as head writer. It aired on Nickelodeon for three seasons, from February 2005 to July 2008. Avatar is set in an Asiatic-like world in which certain people can manipulate one of the four elements—water, earth, fire, or air—with telekinetic variants ...

The Last Airbender: Legend of Korra (originally Avatar: Legend of Korra) is an upcoming American television series set in the Avatar universe as a spin-off of Avatar: The Last Airbender. It is expected to air on Nickelodeon in mid-2012. The series is currently under production, and is expected to run for 26 episodes. The co-creators of the original series, Michael Dante DiMartino and Bryan Konietzko, will personally write all of the episodes to allow for a tighter storyline.

The new series will take place 70 years after the end of the Avatar: The Last Airbender story arc, with all-new characters and settings. The protagonist of the new series, Korra, the next Avatar after Aang, is a hot-headed and rebellious young woman from the Southern Water Tribe who is “ready to take on the world”. The series plans to follow Korra as she faces an anti-bender revolt while mastering the art of Airbending from Aang and Katara’s son, Tenzin

I’m definitely looking forward to this. Hopefully there will be more info soon about the launch date.

Aww. The video said that due to copyright issues it was removed.

Oh well.
Anyway, I’ve really been looking forward to this. :3 I liked the first Avatar so much, I hope they do a great job with this one as well.
^-^

Love me some Avatar.

I can’t wait for this show to happen, I feel like I’ve been waiting so long now. Hopefully they’ll make this one in HD too.

Thank you very much for the link! :3
It looks, to say the least, Awesome!!! :woohoo: It’s practically just as good looking and has a great set-up just as I hoped it would! (great set-up as in time and looks and all that.) I think it can easily surpass the first one, though I may be getting my hopes up a little too much.

The only one thing I was utterly caught off-gaurd by was the fact that it looks like the new avatar is a girl. I mean, I know they can be female as well, but back when I saw the poster for the show when I originally heard about it, it looked very much like a male lead. But I guess eyes are deceiving, aren’t they? ^-^;

Anyway, I’m looking forward to this all the more now!! :laugh:

time has passed and only the comic will tell what happened… this is so .//hack

so betwen the two series, only the comic will fill the gap in what Aang did after the war, and what has happened to the world.

seems more modern in some aspects though which is a bit interesting to see in that video, as well a water tribe doing firebending?

Aang can bend energy to take away bending, so maybe he is NOT the last airbender afterall and can also give bending to people to create a new group of air benders?

Avatar sequel Last Airbender: Legend of Korra is due to run on Nickelodeon in mid-2012, but little media has circulated since summer’s San Diego Comic con trailer. Well, prepare for something to stoke your Bender hype, because Legend of Korra’s opening title sequence has turned up.[/quote]

Yeah, I didn’t expect the OP to last long on YT, but I had to post it.

Like the trailer I posted I doubt if it pops up again on YT it’ll last long, but I’ll try and get another one posted if I see one pop up.

The trailer is out. 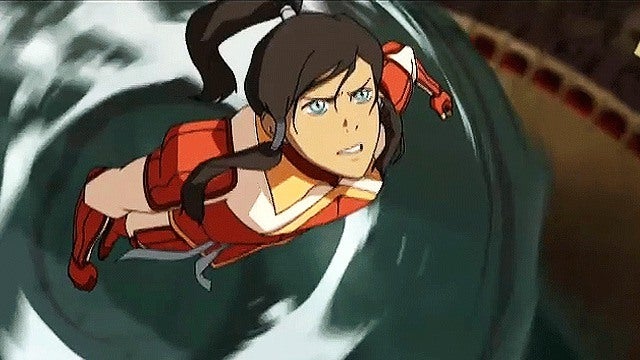 Check out this new promo for the highly-anticipated sequel to Avatar: The Last Airbender.

“The Last Airbender” Co-Creator Comments on “Legend of Korra” Scheduling

Yeah! :cheer: If it wasn’t clear before, then now the premise of the show is clear; and that trailer was awesome! I did already meantion I love it? Because I do~.

Now I know what I’m doing every Saturday morning at 11AM. B) Clears schedule.

Apparently, the first episode leaked some how and is floating around the net, even though it doesn’t air until April 14th.[/quote]

I’ll need to track that down. Did you happen to see it? If so, what were your thoughts on it.

The trailers for the show have seemed pretty bad, but yet I rather enjoyed the original series so I’ll give this a shot. Hopefully it won’t be like the Thundercats reboot and undo everything which was good about the original. I was really hoping that there would be a slew of anime VAs involved in this show, but the only actor I recognize is David Faustino. I hope he gets a lot of speaking time in the series as the idea of Bud Bundy in anything is just ROFL-inducing. You know it :laugh:

I’ll need to track that down. Did you happen to see it? If so, what were your thoughts on it.[/quote]

You could be a good person and wait for it to come out legally and not track it down illegally. Just because it’s out there doesn’t mean you have to support the pirate industry.