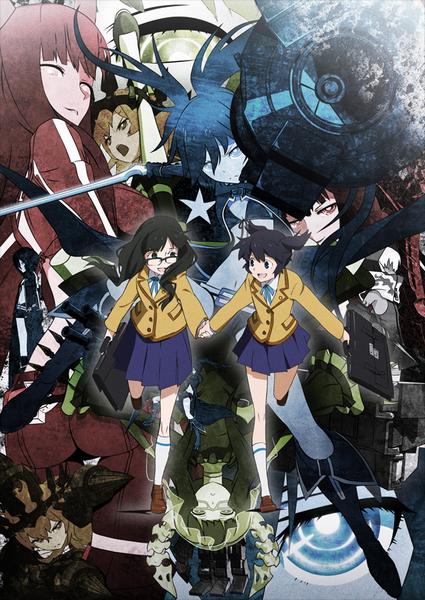 [quote]Genres: action, drama, fantasy, psychological
Themes: fighting, girls with guns, other selves
Objectionable content: Significant
Plot Summary: In spring, two girls meet: Mato and Yomi. They each sense something in the other that they lack in themselves, and are drawn to each other in spite of their contrasting personalities. Though initially hesitant, they form a strong connection. But they both have secrets - and in an empty world, two girls fight: Black Rock Shooter and Deadmaster. A strange being, Black Gold Saw, watches their mysterious battle, laughing. This is the story of two girls, in two worlds, entangled by the threads of fate.
Number of episodes: 8
Vintage: 2012-02-02 to 2012-03-22[/quote]
ANN Info Page

A television ad has announced on Friday that a Black Rock Shooter anime will run in Fuji TV’s Noitamina timeslot in the January season next year. Noitamina producer Kōji Yamamoto and Black Rock Shooter creator huke both confirmed the news on their respective Twitter accounts.

Update: Yutaka Yamamoto, the supervisor of the Black Rock Shooter video anime and the founder of Ordet, reported on his Twitter account on Friday that the new project is not his.

I loved this anime show (even though I had to watch it in Spanish dubs) My only question is when is it coming out on dvd? I know it is in a box set with a figure (which is $500.00) I also know that I have to go to college XD. I just want the DVD, and would like to know when I can buy just that the DVD. So if anyone can get back to me with the answer I would really appreciate it.

Moved this to the anime section where more people are likely to see it.

I assume you’re talking about the TV show and not the OVA.

So, until you get someone with a better knowledge of this than I, looks like you’re out of luck.

To answer the thread question though…

As far as I know, no R1 company has taken a risk on licensing BRS for physical release.
FUNi does have an entry for it on their homepage, but no videos up. ( http://www.funimation.com/black-rock-shooter ) I don’t remember whether they streamed it or not though.
It was however streamed on NicoNico in 8 different languages.

But thus far, the only way to get it on physical media is to import the JP DVD/BDs.

The series was up and available on Funimation’s website, videos and all, when it was currently airing that’s where I watched it. Don’t know why they were removed. If they have a page for it then it’s probably still licensed, though I wouldn’t expect to hear anything about a DVD/BD release for a year or two at least.

You can buy the Japanese version(s) at http://www.cdjapan.co.jp/, but importing is uber-expensive and in this case you won’t even get English subtitles so unless you understand Japanese it would just be a show piece. That’s a great site for imported Japanese CDS, DVD, BD, and other anime swag though. I’ve ordered from them before and they even have pretty good customer service.

The series was up and available on Funimation’s website, videos and all, when it was currently airing that’s where I watched it. Don’t know why they were removed. If they have a page for it then it’s probably still licensed, though I wouldn’t expect to hear anything about a DVD/BD release for a year or two at least.

If that’s the case, and seeing as how it’s been removed, there’s a really good chance they only had streaming rights.
Which means, unless they (or another R1 company) spring for distribution rights, there probably won’t be an R1 physical release.

I really, really dislike when Funimation only picks up a title for streaming. You never know if they are actually going to pick up DVD and Bluray rights or not, as opposed to Sentai where it’s always the case. The big problem is, that nobody has picked up home video rights to a show that Funimation has simulcast and not released, except for House of Five Leaves from NISA. The chances of a show they passed on getting dubbed are pretty much zero right now.

A little birdie told me that this is back up on NicoNico, although I have not confirmed this myself.

A little birdie told me that this is back up on NicoNico, although I have not confirmed this myself.

As far as I know, it never left Nico.