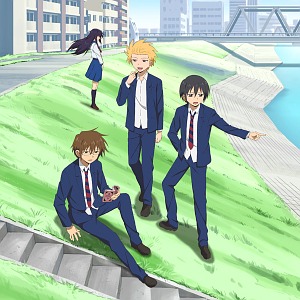 Genres: comedy, slice of life
Themes: School
Objectionable content: Mild
Plot Summary: The lives of a group of students who attend the boys-only Sanada North High School and their acquaintances. Generally centered around three friends; Tadakuni, Yoshitake, and Hidenori; they are surrounded by odd classmates, peculiar family members, and many other unique individuals.
Number of episodes: 12
Vintage: 2012-01-09 to 2012-03-26

About Daily Lives of High School Boys (working title):
Tadakuni, Hidenori, and Yoshitake are students at the all-boys academy, Sanada North High School. This is a tale about just that—their daily lives as students. Winning the basketball tournament? Finding true love? You won’t find any of that here. Whether it’s sparking random arguments while hanging out with friends, meeting that one weird co-worker at a part-time job, or even letting imaginations run wild on a windy afternoon, we’ve all experienced the show’s ordinary but true-to-life themes at one point or another.

About NIS America
In 2003, NIS America was established in Southern California to bring exciting, one-of-a-kind Japanese culture to North America. NIS America’s team members devote themselves to the fans. Their respect for their fans is at the heart of everything they do. As an established entertainment publisher in the U.S., NIS America is committed to continuous growth and improvement. . NIS America is a subsidiary of Nippon Ichi Software, Inc., a Japanese company famous for its unique line of strategy RPGs with titles such as Disgaea, Phantom Brave, and Makai Kingdom. NIS America has also become a publisher of Japanese anime titles, such as Toradora!, WAGNARIA!!, and Katanagatari. Contact: NIS America, Inc. 1221 E. Dyer Road. Suite 100. Santa Ana, CA 92705 / 714-540-1122 / NISAmerica.com

The official website for the anime reported on Tuesday that the staff is “immersed in planning for something that can be announced in the end of April.”

NIS America (NISA), the American subsidiary of the Nippon Ichi Software game company, announced on Thursday that it will release Sunrise’s Daily Lives of High School Boys (Danshi Kōkōsei no Nichijō) television anime for North America on August 6. NISA will release the series on two Blu-ray Discs in a subtitled-only premium edition set for US$64.99. The set includes a 30-page hardcover art book and collectible slipcase. Video extras include bonus scenes and a clean opening and ending.

Join Tadakuni, Hidenori and Yoshitake as they undergo the trials and tribulations of life in high school. Each episode presents the boys and their classmates in unique situations that you may or may not have faced in high school yourself! You’ll laugh! You’ll cry! (But hopefully laugh more.) You’ll be astounded by the zany antics of the Sanada High School community!

The anime premiered in Japan on January 9. A second season was hinted at last year and a live-action film adaptation will open in October. The manga adaptation ended in September.

Nichibros: Get Hooked on Our New Catalog Shows!

December 14, 2017 7:05pm CST
Dive into our latest catalog additions and find out what will get you hooked from the first episode!

If You Survived High School, Daily Lives of High School Boys Is for You!

June 20, 2018 11:00am EDT
Adolescent awkwardness is the name of the game in this 2012 TV anime about teenagers goofing around