Plot Summary: (via PR)
Using amazing weapons powered by super-science, the international terrorist organization known as GALACTOR is out to steal all of Earth’s resources for itself and its inhuman masters. Mankind’s only hope? The International Science Organization and their elite strike force, the Science Ninja Team! But these five young heroes will have their work cut out for them as they take on the seemingly impossible task of defeating GALACTOR’s horrific arsenal of mechanized weapons of mass destruction and endless armies of henchmen. Can costumed commandos Ken the Eagle, Joe the Condor, Jun the Swallow, Jinpei the Sparrow and Ryu the Owl really overcome such overwhelming odds? Utilizing the incredible technology and fighting techniques created by Dr. Nambu, and with the mighty ship the God Phoenix at their command, they just might! It’s time for the bad guys to get old-schooled science-ninja style as Japan’s original super team defeat evil, one flying kick at a time, in the legendary, one and only GATCHAMAN! 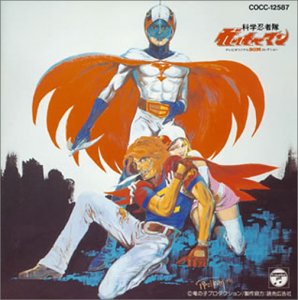 Plot Summary: The sinister mutant Berg Katse has launched armies of henchmen and giant weapons of mass destruction against Earth. But the forces of evil are about to meet their match. The Science Ninja Team stands ready to take the battle back to the bad guys. 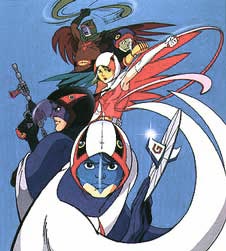 Plot Summary: Two years after suffering defeat at the hands of the Gatchaman team, Sosai X returns to Earth and crashes into an ocean liner. During the crash, he takes a four-year-old girl aboard the ship and mutates her into GelSadora, making her the new Gallactor leader. With Gallactor back on the rise, Dr. Nanbu and the ISO bring the Science Ninja Team Gatchaman back into active duty. But the Gatchaman team get the shock of their lives when their former teammate Joe the Condor - once thought to be dead after the team’s final battle with Gallactor - returns as a cyborg. 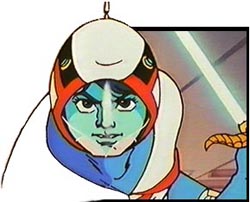 Plot Summary: A surviving fragment of Sosai X mutates into Sosai Z and recruits megalomaniac Count Egobossler to create an army to conquer the world. To combat this new threat, the Science Ninja Team Gatchaman once again return with newer weapons and a new ship - the Gatchaspartan. But with the new weapons comes a heavy price: the more Ken the Eagle uses his weapon Gatchafencer as part of the Gatchaspartan’s ultimate weapon, the weaker he gets as the weapon mysteriously and slowly drains his life force.

Yeah Sentai, it looks really bad when you can’t get the show description right.

I kinda like the cover art, with the exception of Disc 2 (Disc 3 does look like something Funimation would do lol). I’m not sure what happened there.

If only this cover art were more than just barely related to that of the show. Cover art is supposed to sell the series but anyone buying the show in significant part due to the cover art is in for a serious disappointment.

All of the art is from the previous ADV releases Alex Ross art even the disc. Be nice to have set that takes up three cases space instead of 27 plus extra space from art boxes…

All of the art is from the previous ADV releases Alex Ross art even the disc. Be nice to have set that takes up three cases space instead of 27 plus extra space from art boxes…

lol Seriously, only reason I didn’t order the set, is I already have the ADV release of Series 1. So I just ordered the OVA DVD set which I didn’t have.

On one hand, it’s a Greenfield dub with commentary.

On the other hand, it’s a show that does not look appealing and has no nostalgic value for me (as others, like Voltron, do).

Ambivalence: I has it.

Looks like the back covers have been posted as well. 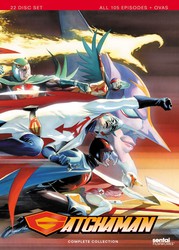 Online retailer Amazon is listing the Blu-ray and DVD complete collections of the 1972 television anime series Gatchaman on December 10. The complete OVA collection release is also listed on December 10. Sentai Filmworks originally scheduled the sets to ship on October 29.

Section23 announced a slight delay for the DVD and Blu-ray release of Gatchaman TV + OVA Complete Collection. Instead of the October 29 street date, the title will now be available on December 10.

Also, this show was made during a time that I can’t really enjoy it now. Only shows from this time I can enjoy are those I have seen close to the time (I wasn’t born yet when this aired in Japan!)

Whoa! What happened with the back cover art?! Was the artist drunk? Did he take some of whatever Salvadore Dali was always hopped up on? My eyes cannot unsee that ugly. Another reason on a long list of reasons for why cover art shouldn’t be in a radically different style than the show art.

The only way that is a slight delay is if it is held against some of Funimation’s most infamous delays like Darker than Black: Gemini of the Meteor or Last Exile: Fam of the Silver Wing. Otherwise I’m o.0 about calling a 42 day delay “slight”.

It’s Alex Ross art. At the time ADV released the original sets he was still rather a big deal. In my opinion the art is fine the problem was they had at the time 9 art boxes with various art instead going with a nice connecting art piece across the spines . It could have been a great piece like the Masters of the Universe sets from BCI ,but instead it was this huge cluster of great art that looked like random paintings picked blindfolded from a Alex Ross artbook of Gatchaman.

The English Dub Casts for Gatchaman TV and OVA are the ones listed for ADV and Sentai at ANN.

[quote=“Slowhand”]The English Dub Casts for Gatchaman TV and OVA are the ones listed for ADV and Sentai at ANN.

I wonder if that’s what caused the delay, that they decided to redub the OVAs with ADV cast. Nice that they did. It also allows them to make sure everyone will be available for Gatchaman II and Gatchaman Fighter when they finally get to them as part of the Tatsunoko deal.

Well my Blu-ray has shipped and is out for delivery today. Not sure how I missed that.

Watched a few episodes today. There is some flaws to be expected given its age ,but really it looked pretty good. While not chipboard the box is pretty nice even has some art inside. Still find it funny looking at how much space my original ADV sets took up compared to the new set.