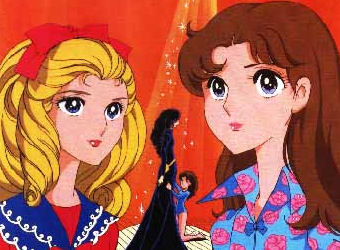 Plot Summary: Her father passed away very early and her mother lives and works in a crowded Chinese restaurant. Kitajima Maya, a 13-year old girl, has to carry the burden of making ends meet as she fights against her ill fate. However, she is able to overcome the trials and tribulations in her life with her passion and enthusiasm. She happens to encounter the reclusive actress Tsukikage who decides to train and mold her into the foremost actress of her generation. 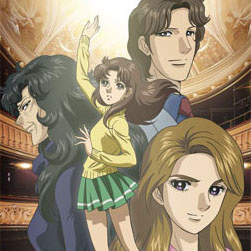 Plot Summary: Her father passed away very early and her mother lives and works in a crowded Chinese restaurant. Maya Kitajima, a 13-year old girl, has to carry the burden of making ends meet as she fights against her ill fate. However, she is able to overcome the trials and tribulations in her life with her passion and enthusiasm. She happens to encounter the reclusive actress Tsukikage who decides to train and mold her into the foremost actress of her generation.

Based on what I’ve read and screens, trailers and OP I’ve seen… I’m getting a Chance Pop Session and Kaleido Star-esque but more focus on drama and romance vibe. Can’t wait to see this one.

I loved Chance Pop Session. Great little show. I still have to finish that. That’s a show that I must own on DVD. If this is anything like that perhaps I’ll like it too. If the subs come here for free perhaps I’ll give it a watch one day.

This is another show that’s on it’s way to me. Just waiting for it to arrive. I’ve heard pretty good things about it, and I’ve always been a big fan of dramas, so I hope I like it.

I am debating on getting this. It looks like my type of series and the price for 26 episodes is a steal. Though I wonder what type of case it is. Guessing stackpak.

Though I wonder what type of case it is. Guessing stackpak.

I’m guessing it’s probably a stackpak as well, since it has the same MSRP as the Kiba collections.

Though I wonder what type of case it is. Guessing stackpak.

I’m guessing it’s probably a stackpak as well, since it has the same MSRP as the Kiba collections.

I’ve not bought anything over 2 disc from them in a while so I was hoping my guess is wrong. Thanks for adding to my reason to worry coffee.lol

It is a stack pack, but it also seems to be a new type. The case design is different, and it features a different hub. It holds this discs in place much more securely than the previous ones, but they still ship it with the styrofoam pad.

More info from Glass Mask from the new press release

HOUSTON, January 19, 2009 2010 – Section23 Films, America’s fastest-growing anime distributor, is pleased to announce two new anime DVDs from Sentai Filmworks, including the first collection in the epic Glass Mask and the final volume of the school comedy Special A. Both new releases go on sale today.

Glass Mask Collection 1 presents the latest anime adaptation of one of Japan’s most popular and enduring shojo epics. The original Glass Mask manga series runs more than 40 volumes since its launch in 1976, over 50 million copies of which have been sold in Japan. The story has been adapted several times for the screen, including a live-action series starring Yumi Adachi. This collection contains the first 26 episodes of the Glass Mask saga on four DVDs.

SYNOPSIS: Two Girls. One Dream. And the Entire World for a Stage. At 13 years old, Maya Kitajima seems destined to spend the rest of her life toiling in a crowded restaurant alongside her bitter and unstable mother; but when her incredible acting talent is discovered by the legendary diva Chigusa Tsukikage, Maya finds a new future filled with both golden opportunities and terrifying risks. For Ayumi Himekawa, success has always been assured, yet she longs to be recognized for her own talents and skills, not the family connections of her famous parents. For both, the ultimate prize is the role of The Crimson Goddess in the play of the same name, a part created by Chigusa and now portrayed by Ayumi’s mother. To achieve this goal, each must seek out and conquer every acting challenge, pushing the limits of their talent and endurance to the utmost, until they are worthy of the part…. But for one to win, the other must fail! The dramatic rivalry of a lifetime begins in the acclaimed first collection of GLASS MASK!

So has anyone watched the first set of this trying to decide if I should make one last sale order?

I’ve got it, but it’s buried pretty deeply in my backlog. It does seem that most people that have seen it really enjoyed it. You could check out some of it on Crunchyroll, if that’s an option for you.

Yeah I forgot about Crunchyroll.lol
I will probably do that as soon as my Internet stops all this lagging.

Chris Beveridge recently posted a review for Glass Mask Collection 1. He gave it an “A” overall.

*Over the first twenty-six episodes, there is an immense amount of ground covered as we get two years worth of stories as Maya grows into being an actress. There are some cruel moments, some incredibly moving moments and numerous areas of simple human drama that propel the story along. The down and dirty nature of the stage is often apparent as various young and older actors despise Maya for a variety of reasons, but in the end none can refute the raw talent that’s there that could change the stage forever. Maya’s one of the most honest characters I’ve seen in awhile where she’s actually layered yet incredibly simple. Watching her work through these challenges, failing here and there and overcoming others, it’s very moving and engaging. This first half of the series is one of the best lengthy things I’ve seen in some time and the next set can’t come fast enough.
*

It’s good to see some more positive reviews for Sentai series. I’m really looking forward to this one!

I wonder if this is still playing online as well. The email announcing Ichiban Ushiro no Daimao stated that Glass Mask was coming to VOD and Online. However, it is absent from the online schedule.

I just finished up Episode 1 and it was pretty enjoyable. There is one thing that really bothers me.

My DVR box is downloading episode 2. I hope this encourages people to pick up the first box set. It’s starting to look like Glass Mask may be the first series that Sentai leaves unfinished.

I just finished up Episode 1 and it was pretty enjoyable. There is one thing that really bothers me.

She was definitely disappointed, but slapping her and calling her worthless was way too much.. You say tomato…

I was meh on this one after the first episode, but three in and I’m pretty well hooked.