Genres: drama
Themes: historical, tragedy, war, World War II
Objectionable content: Mild
Plot Summary: On the final days of World War II, 14-year-old Seita and his four-year-old sister Setsuko are orphaned after their mother is killed during an air-raid by American forces in Kobe, Japan. After having a falling-out with their aunt, they move into an abandoned bomb shelter. With no surviving relatives and their emergency funds and rations depleted, Seita and Setsuko must struggle to survive their hardships as well as those of their country, which is on the losing end of the war.
Running time: 88 minutes
Vintage: 1988-04-11 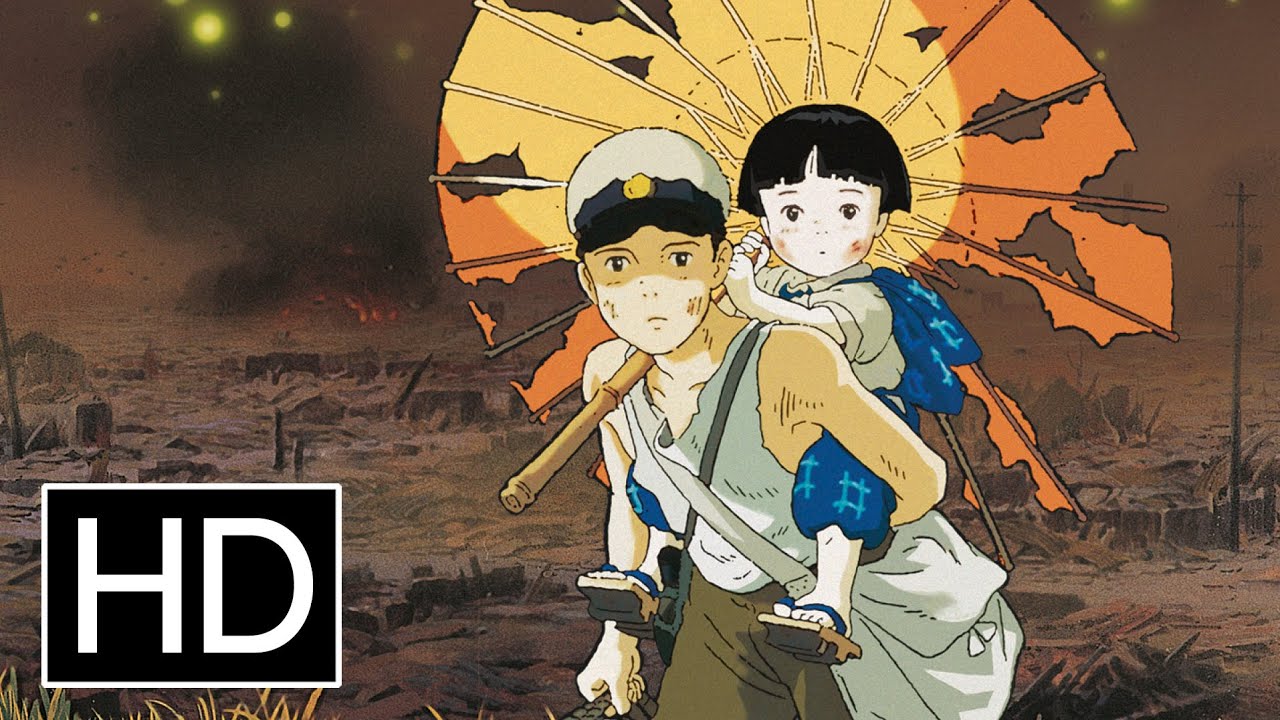 I saw “Grave of the Fireflies” last winter. I watched it expecting the most depressing anime I’ll ever see, but wound up misled. It didn’t seem all too different than any other show involving the death of a main character.

It was a great film though, I just don’t think it lived up to its notorious title of being extremely sad to the point of being unique.

I saw “Grave of the Fireflies” last winter. I watched it expecting the most depressing anime I’ll ever see, but wound up misled. It didn’t seem all too different than any other show involving the death of a main character.

It was a great film though, I just don’t think it lived up to its notorious title of being extremely sad to the point of being unique.

Watching grave of the fireflies was like reading Othello or Hamlet. Everyone dies As I am sure you all know by now, I thought it was too depressing to enjoy it. Don’t watch it if you are having a good day.

If i can recall that was a beautiful movie.
it was a bit of a sad story.

i cant think of the details about it.
i havent see the movie in a while.

But a very good movie i think.

Saw it once, then gave it away. Don’t think I could watch it again, too sad. I wonder where it is now? Probably in someone’s freezer.

Yeah, Grave Of The Fireflies is movie every anime fan needs to see. But it’s not one that many of us will rewatch. I don’t think I’ve ever watched something more depressing than this movie.

Yeah I have a couple of friends who have watched this movie, but only once. Ask them to watch it again, I guarantee they’ll say no haha. It’s just one of those movies I guess.

I’ve been trying to get my best friend to watch this show for a couple years, and still can’t get her to. But I think she’s starting to waver, and is even considering picking up the ADV release.

TELL HER TO BUY THE DVD lol

If she’s at all into anime, this is a must watch for her. Even people who have never seen anime should at least take a look, if only for the superb story it presents to the viewer.

Couldn’t agree more. I’ve actually recommended it to a lot of people, even those who aren’t into anime, but are looking for WWII films.

After watching that anime, I felt very depressed but I enjoyed it too. I never wanna watch it again.:ohmy:

After watching that anime, I felt very depressed but I enjoyed it too. I never wanna it again.:ohmy:

Agreed, minus the enjoyed it part

This movies got nothing on Barefoot Gen. That was generally horrifying, dark, grim and yet somehow a little uplifting. This on the otherhand was full blown depressing. The differences in tone is fittying however, seeing how this has to do with the firebombing of Kobe, and that had to do with the atomic bombing of Hiroshima. I did however like Barefoot Gen more then this. However both should be watched by everyone.

This is a very powerful anti-war film. Put this one next to Now and Then, Here and There on the shelf, for old times (and CPM’s) sake. I really was moved my this film, and that means something coming from someone as cold hearted as I am ;). I bought the CPM verson awhile ago, but went out and bought ADV’s re-release as soon as they put it out as well. because films like this need to supported. I despise most Ghibli stuff (if anyone knows me well enough, they know of my burning hate for that studio), and yet I really liked this, so that speaks volumes of how good this movie is. However I do feel a little silly owning two dvd’s of this, as I can’t imagine watching it again it’s such a downer. And I generally like downers too.

Really though if anyone hasn’t seen this, I highly recommend it, even though it’s very sad. It’s something everyone needs to watch. CPM gave it a load of extras that were very interesting as well, esecially the Roger Ebert interview. This is why I loved CPM. No one else would do that.

Why is that every time a series or movie has mentioned, someone always has to start a comment with “Well, [insert title her] is much better. This has nothing on it”? This is a thread about Now and Then, Here and There, not Barefoot Gen. It’s especially more confounding when you go on to say that it is still a good movie, especially after you start out belittling it in comparison to something else.

I don’t see why everything has to be judged in comparison to another title. A title should be judged on it’s own merits.

Not to mention, everyone I know who has seen both Barefoot Gen and Grave of The Fireflies, much preferred Fireflies. Though it is a one time watch for most people. It definitely has a lasting impact, not something I can really say as much for Barefoot.

Sorry… had to go on a bit of rant there.

Uh…because they are all war dramas!! Duh. They are all great war dramas that are similur in tone. I’m not the first to compare the three and I won’t be the last. I would never belittle this movie though. It’s quite well done. However I didn’t like it nearly as much as NTHT or Barefoot Gen. They were much better, and are very underaited in my opinion. That’s nice that everyone else on the planet disagrees with me. They always do and I don’t care anymore. NTHT actaully made me cry(don’t make fun!), and Barefoot Gen was horryifing and disturbing. This however did not move me as much as the others, that’s all I’m saying. Of course I have a Madhouse and AIC bias clearly, so it should be no surprise I like those more then this. But for hateing Ghibli with a passion, yet still placing it on my top ten list, I think that means a lot here…

I can still like this movie, and like others more then it can’t I? I don’t understand what’s so hard to get about that. What really bugs me is when people say “this is the best blah blah blah” without even seeing anything similur…

I guess I’m just always compareing stuff though. That’s just how I think. I see nothing wrong with that though, as I think it’s helpful for those looking to watch other things like this. Plus I’m always thinking like a critic I guess. (I promised myself I wouldn’t become a critic when I started writing reviews…oh well that’s out the window). Sorry if I got on your nerves here, but I feel I did nothing wrong.

Okay, the “Duh” wasn’t needed. You don’t need to insult me every time I disagree with you. I understand the fact that they are both war dramas. I also wasn’t just referring to you in particular. I just get tired of every thread turning into “Well, this is better than that.” I really don’t feel that it’s very constructive. Just because one person liked Title A, doesn’t necessarily mean they will like Title B. Not to mention, when you start those discussions, the threads turn into a discussion of an entirely different show. Like I said, this thread was about Grave of The Fireflies, not Barefoot Gen. If you wish to discuss the other, then start a thread for it.

I’m not sure why you got so worked up over this man. I felt the comparison was very contructive to the topic. And I didn’t start another topic about Gen because I was talking about all three and how they compare, not just Gen. I didn’t mean to be rude, and I’m sorry about the “duh” comment, that was out of line (to be honest with you I’m not sure why I wrote that. Sorry must have been cought up in the moment there), but to be fair you kinda snapped at me first here.

And I tend to think people like titles that are similur in tone and style most of the time, so a comparison is a great deal of help. I would never have watched this or Gen if not for the two being compared to NTHT. And that would have been a shame because I love all three very much. And I’m sure there are others who’ve watched Gen then saw Fireflies because of the comparisions out there and vice versa.

Grave of the Fireflies Blu-ray to arrive on November 12

This was the only Sentai news which disappointed me. I so despise this movie as it tries to use emotional manipulation to bring viewers to an illogical conclusion. Not to mention how the movie conveniently, and incorrectly, blames America.

So now we can see how pride kills in HD. I guess that’s something…something I know that I won’t be buying.

This was the only Sentai news which disappointed me. I so despise this movie as it tries to use emotional manipulation to bring viewers to an illogical conclusion. Not to mention how the movie conveniently, and incorrectly, blames America.

So now we can see how pride kills in HD. I guess that’s something…something I know that I won’t be buying.

It doesn’t conveniently or incorrectly blame America. The film is historically accurate, makes virtually no references to America, and is about the horrors of war as witnessed by two children. The story could have played out the same whether the children were Japanese, American, British, German, Polish, etc.

The film featured two Japanese children because the film was produced for and released in Japan. Miyazaki would have never got funding for this, or Totoro, had he pitched it as a film about two children in Pearl Harbor. There is no nefarious political scheme behind this movie to white wash Japanese history (though there certainly have been attempts by certain Japanese and German officials to do so now.). If Miyazaki had been able to pitch Totoro on its own, then this film would have likely never been made.

Atrocities in World War II were committed by all sides. The Japanese and the Germans were certainly the worst offenders, but that does not invalidate the suffering their civilian population endured. This was a movie about two children, not about military or political officials.