Plot Summary: It has been several centuries since human population has declined. Food has become harder to find and what little sources the humans have are considered highly valuable. The most prosperous species on the Earth are “Fairies”, 10 cm tall creatures with high intelligence and a great love for sweets. A nameless girl, the main character, became a UN arbitrator between the humans and the fairies and had returned to her hometown to help her grandfather. One day, the village is sent some strange products made by a company called FairyCo. Since the villagers are wary of using the products, the girl, her grandfather, and a nameless boy decide to go to the factory to find out about the mysterious products and who is behind making them.

For years, declining birth rates have forced what’s left of the human race to cede more and more territory to other beings who have appeared to take advantage of the emptying ecological niche. Now, only a handful of humans remain among the remnants of civilization and Earth is dominated by faeries – tiny, ten-inch tall creatures of surprising intelligence. But humanity’s importance isn’t over quite yet, as young Watashi learns as she makes the decision to return to her hometown and assume her grandfather’s position as an arbitrator between the races. Unfortunately, the job isn’t going to be anywhere near as simple as she expected, and it’s going to take a wisdom far beyond her years to achieve her most important mission. Because it’s not about how often you fall and fail, it’s about how often you get back up and try again, and the human race still has a lot left to accomplish in JINRUI WA SUITAI SHIMASHITA.

Jinrui Wa Suitai Shimashita will be available soon through select digital outlets with a home video release to follow next year.

About Sentai Filmworks:
Sentai Filmworks is one of the fastest-growing anime companies in North America, producing hit series like High School of the Dead, Towanoquon, Samurai Girls, Guin Saga, Needless and Angel Beats as well as high profile theatrical films such as Grave of the Fireflies and Appleseed. Sentai Filmworks’ programs can be found on home video distributed by Ingram Entertainment, Baker & Taylor, Section23Films, The Right Stuf and other good and fine distributors. Digital product offerings may be found at iTunes, Hulu, Netflix, Amazon, Zune Marketplace, Anime Network, Playstation Network, Android Market and YouTube.

Looks like this got an official English title now.

Sentai hasn’t posted any of their recent AX PRs on their site yet, but CR changed the title of their stream. 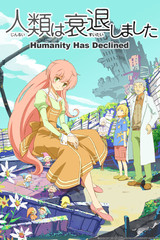 Humanity Has Declined - Watch on Crunchyroll

Our human race has been slowly declining for several centuries now. In many ways, the Earth already belongs to the Fairies. Life is relaxed and care...free? Thus begins a story that is a little strange and just a tiny bit absurd. - Watch on...

Well, that’s much easier to pronounce. I will have to check out the streams for this one. I really like the premise.

Oh… My… God!
This has to be the single most cute, adorable, funny and epicly random series I’ve seen in quite some time!

I’m loving this more and more as it progresses!

I know right, I love how sharp and sarcastic the Mediator girl is, this is a definite buy for me so far. :laugh:

Man, this series is just so out there random!

I didn’t like this arc as much as the previous ones, however…

The over the top shonen named fight attacks part was hilarious!
And the fairies in this episode in particular were beyond adorable.

I was prepared to throw a minor fit this episode, especially after my annoyance about her hair inconsistency last episode.

How to raise a nation and watch it fall in just 14 days!

I love how random this series is!

After skimming all the episodes again, I think I figured this out…

And to continue the timeline…

This episode goes back to when Mediator was in school and first met the faries.