Genres: action, comedy
Themes: ninjas
Objectionable content: Significant
Plot Summary: Jiyu Nanohana is an ordinary schoolgirl until she runs across a scatterbrained 300 year old samurai who tells her that she is the reincarnation of Yagyu Jubei. With the help of the “Lovely Eyepatch” she transforms into the legendary swordsman whenever she needs to use his awesome fighting ability, which she needs to do quite often as a rival clan is dead set on conquering Yagyu to satisfy an old family grudge.
Number of episodes: 13
Vintage: 1999-04-05 to 1999-06-28
Ending Theme: “Forever” by 1999 Shojo Tai 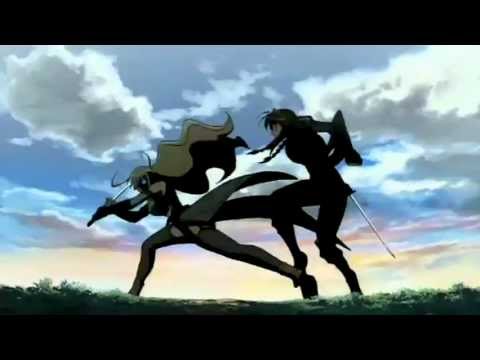 Genres: action, comedy, drama
Themes: ninja
Objectionable content: Significant
Plot Summary: 300 years ago, in the frigid land of Siberia, Jubei Yagyu engaged in a fierce battle with Kitaretsusai of the Northern Yagyu clan. The duel was costly, as his daughter Freesia was frozen in suspended animation. As a result of global warming in the present day, Freesia breaks free from her icy grave and moves to Japan as a middle school transfer student, where she befriends Jiyuu Nanohana. Little does Jiyuu know that Freesia is targeting her to acquire the coveted Lovely Eye Patch, which Freesia believes is rightfully hers.
Number of episodes: 13
Vintage: 2004-01-07 to 2004-03-31
Opening Theme: “Nagi ~Peace of Mind~” by Okazaki Ritsuko
Ending Theme: “Kokoro Harete Yoru mo Akete” by Yui Horie

I wasn’t expecting such a serious episode. I can see why Sai doesn’t like doctors and why he’s a stay at home dad.

I’m glad Jubei got her eyepatch back. But for all his grandstanding, Hajime seems a bit of a chicken, calling upon others to fight his battle for him. In the end, everyone is saved again and it was nice to see the brothers make up, but did Hajime have to join the Ruffians? LOL And it seems that things aren’t quite over yet – poor Shiro!

I never thought Sai would go up against his own daughter like that. That was pretty intense. But the outcome was a good one, although it was sad to see Koinosuke go. However, after being around for three hundred years, I suppose he deserved a rest. I was glad to see that everyone got a happy ending, except perhaps for poor Sai, who ended up with a broken heart. All in all, a good anime and I enjoyed it very much. I especially liked the theme music!

Do not forget while only on DVD, hope to eventually get a blu ray release but Jubei Chan first series. #mediablasters #jubeichan #anime https://t.co/Lr43WdFeKk
1 Like
Slowhand January 27, 2021, 2:03pm #9