Genres: comedy, fantasy
Themes: absurdity, moe, witches
Objectionable content: Mild
Running time: 26 minutes
Vintage: 2013-03-02
Plot Summary: Akko fell in love with magic ever since her childhood days. Aspiring to become a witch like the one she saw at a magic show, Akko enrolls in Luna Nova - a prestigious witch academy. Contrary to Akko’s expectations, the class is unexpectedly boring. Struggling with the unimaginative atmosphere of the academy, Akko tries to retain hopes and dreams in magic once again. Sadly, the reactions from her peers remain indifferent. Akko’s only supporters are her best friend Lotte and Sucy, but her adventurous spirit remained unsatisfied. Then one fateful day, something unthinkable happens. The academy faces a huge crisis and is at the brink of destruction. Now it is up to Akko and her friends to save the day. 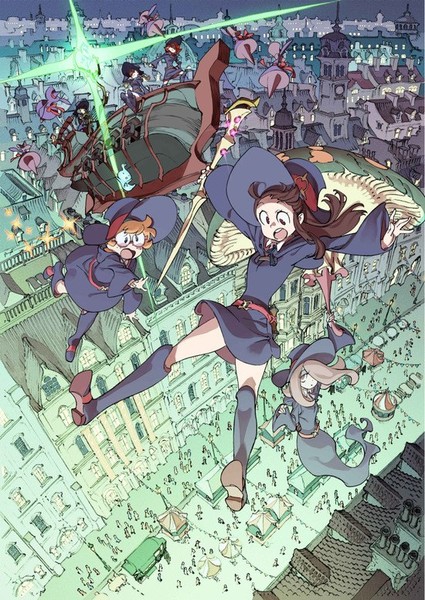 Genres: magic
Plot Summary: Akko Kagari is an ordinary girl who joins the renowned witch academy for witch girls, Luna Nova Academy. When she was younger, she went to Magical Festa, a magic show hosted by a witch named Shiny Chariot. Akko was so mesmerized and inspired by Shiny Chariot’s performance that she dreamed to someday be a “cool” witch like her. This young and impressionable Akko takes Shiny Chariot’s words as her own motto: "Never forget, a believing heart is your magic.“ As part of a class, Akko and her classmates go into a labyrinth under the Tower of Luna Nova. There, a sealed ancient dragon was unleashed by one of her classmates. Akko tries to stop the dragon, but…

I haven’t gotten a chance to watch this yet, but I’ve heard nothing but good things about it so I’ve been wanting to see it.
So here it is, legal and everything!

I watched it this morning, all I can say is Trigger has gold, pure gold, in their hands. I’m keeping a close eye on them from now on.

So I got to watch this yesterday.
I definitely have to agree with everything I’ve heard about this little anime…

It soooo deserves a series to be made from it!

Finally got to see this and it was wonderful! I agree that it would make a great series!

Trigger, the new studio co-founded by director Hiroyuki Imaishi (Dead Leaves, Gurren Lagann, Panty & Stocking with Garterbelt), revealed on Monday that it would be releasing the 30-minute Little Witch Academia anime on Blu-ray Disc this summer. Trigger said that the release date of the Blu-ray is undecided as of now, but that the Blu-ray would definitely come with added bonuses such as English subtitles.

[QUOTE]We are taking down the Youtube and Nico Nico upload of “Little Witch Academia” at the end of this month.[/QUOTE]

[QUOTE]I just went and confirmed. Yes, the LWA on crunchyroll will remain.[/QUOTE]

Oh, and the US is just now waking up. This could get interesting.

I’m looking forward to the release of this. It’s my first time as a Kickstarter backer.

December 25, 2014 10:25am CST
Timed for the holidays, Trigger and producer Naoko Tsutsumi gone to Kickstarter with an update on their production of a crowdfunded production

Timed for the holidays, Trigger and producer Naoko Tsutsumi gone to Kickstarter with an update on their production of a crowdfunded follow-up to their Little Witch Academia anime short.

Merry Xmas everyone! We just updated our KS page so please check it out! Comes with a tiiiiny surprise as well https://t.co/qbcodUpUG5
— たっつん (@Trigger_Tattun) December 25, 2014

We have made LWA available once again on Youtube for a limited amount of time to celebrate the holiday seasons! https://t.co/kO0aD14mEu
— TRIGGER Inc. (@trigger_inc) December 25, 2014 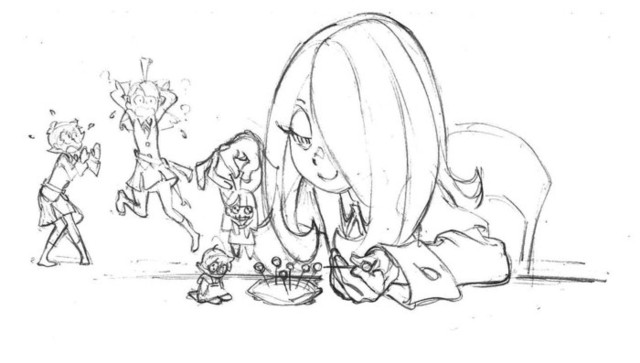 At last the physical production for Little Witch Academia 2 (LWA2, title pending) has started in the studio! It is a great pleasure to see Akko and her friends receive the chance to be animated once again. Of course, this would not have been possible without the support of Kick Starter, and most importantly our fans! I would like to once again say my thanks to all of our supporters on behalf of TRIGGER.

In our previous update, we have announced that we have finally came up with a scenario that we are happy to work with. Today I would like to update our backers that our director Yoh Yoshinari is just about finishing up on drawing up the storyboard for our new episode! If all goes well, we should have a completed storyboard by this weekend! Below is couple of image from the previous LWA’s storyboard. As much as we would like to show the current storyboard, we have concluded that it is best to not spoil the story. 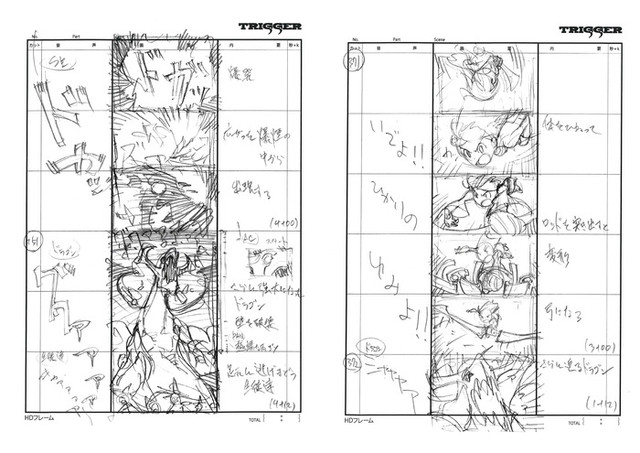