Genres: action, psychological, science fiction, thriller
Themes: crime, cyberpunk, dystopia, future, police
Objectionable content: Intense
Plot Summary: The series takes place in the near future, when it is possible to instantaneously measure and quantify a person’s state of mind and personality. This information is recorded and processed, and the term “Psycho-Pass” in the anime’s title refers to a standard used to measure an individual’s being. The story centers around the “enforcement officer” Shinya Kōgami (Seki) who is tasked with managing crime in such a world.
Number of episodes: 22
Vintage: 2012-10-12 to 2013-03-19. 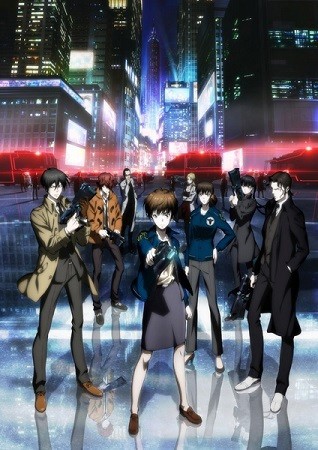 Genres: science fiction
Themes: dystopia, police
Objectionable content: Intense
Plot Summary: Having learned the true nature of the Sybilla System, Akane Tsunemori chose to obey the system, believing in both humanity and the legal order. She’s part of a new police section and spends her everyday life facing down criminals. Unbeknownst to Akane, however, a monster who will shake the system to its core is about to appear before her.
Number of episodes: 11
Vintage: 2014-10-09

Plot Summary: Centered around two rookie inspectors of the Ministry of Welfare’s Public Safety Bureau (MWPSB); Arata Shindo and Kei Mikhail Ignatov. These two inspectors are confronted with an ever changing society under the jurisdiction of the all knowing and impartial system of collective consciousness known as Sibyl and a contradiction that exists solely to evince the imperfections of the Sibyl system. Contending with an increasing anti immigrant sentiment, political intrigue, as well as peculiar individuals who exist solely to test the Sibyl system, these two inspectors are confronted with two choices, which are to either follow or overturn the system.
Running Time 1 hour
Number of Episodes: 8
Vintage: 2019-10-24

Since the rumor that Gen Urobuchi as scriptwriter has been confirmed, I figured I’d make a thread on this.
I guess that means this series will definitely have some messed up twists and turns in the story.
Also, since it’s a NoitaminA series, makes me wonder if Sentai will pick this up as well.

Since the rumor that Gen Urobuchi as scriptwriter has been confirmed, I figured I’d make a thread on this.
I guess that means this series will definitely have some messed up twists and turns in the story.
Also, since it’s a NoitaminA series, makes me wonder if Sentai will pick this up as well.

The Fate/Zero, PMMM, Phantom guy? I don’t think that should get hopes up for “twists and turns in the story”, but I could be surprised. His previous works haven’t been particularly original in story, and this looks right up that alley as the first thing I thought of when I read the description was Minority Report, though it doesn’t sound as good.

That said, while his tales aren’t original or laden with plot twists they are decently entertaining IMO (well, except the Phantom anime…) so that’s a good thing.

Despite my minor misgivings, this sounds like a Noitamina show that I can get behind, something that I’d strongly consider (atm) throwing down ~$60 for a dubbed Sentai release of, unlike Kids on the Slope/Tsuritama which aren’t really my style.

Looking at the listing of Noitamina shows (while I don’t like the name, it is great for searching) there are a fair number of shows that I thought were pretty good in there, but for some reason I only associate the bad ones with the programming block, which is unfortunate. I wonder why that is.

Psycho-Pass Blu-rays to Include Mini-Adventure Games

So has this been any good? I’ve read the FandomPost reviews, but they like everything over there…

Looks like FUNi licensed the home video rights to this, though they haven’t made any “official” announcement of it yet.

A FUNimation promo poster that notes “COMING SOON TO HOME VIDEO”. I’m pretty sure this person won it from FUNimation’s noitaminA Nights.

I bet that Sentai could have this dubbed in a week, and that’s overestimating how long it’d take em. I’d totally buy another un-subbed blu-ray release if it let me get the show in 2013. Spring 2014 is both a long time and a long time away, not to mention that with Funimation I would not be surprised if Spring 2014 became something like Fall 2015.

…why is the director telling Americans about the possibility of another season if the show gets enough support? It sounds like some brutal teasing as by the time the US can most support the series, when Funi releases it, the show will be long forgotten in Japan. I guess there’s some hope–Freezing comes to mind–of a really delayed sequel but some != much.

Then again, I don’t know if this show blows or not. It’s the only Funimation simulcast this year that looked any good but I couldn’t get behind the subbed voices on that one (and I don’t like watching simulcasts off of Crunchy).

Interesting, though I might revise that opinion once I finally see the first season.

It is beyond lame that Funimation has the first season dubbed, has already shown the dub, but yet won’t release the dub for what amounts to the better part of a year (or longer, Funimation’s delays are legendary).

So buying the 8th volume of Season 1 gets you a chance to win a ticket to see the entirety of season 1 in a theatre with the promise of an Earth-shattering announcement at the end of the show marathon, an announcement that winners of this contest might not even get to see live? I believe the word “meh” was invented for describing events like these lol.

I enjoyed this show a lot so I’m glad it’s continuing, especially since I was not exactly satisfied with how the first season ended. It will definitely be interesting to see where the story goes, plus the Psycho Pass universe is interesting and ripe for more exploration.

C’mon Funimation, quit holding the show hostage. If this becomes like Last Exile (and gets a half-year delay), Fujiko Mine (which was pushed back and stripped of features) or Darker than Black II (which was gradually pushed back time and time again) I will not be happy with Funimation. I really don’t want to watch it subbed as then I rarely go back and watch a show like that dubbed before a year or so has passed.

Right now I’m still in denial that posting about it on the internet won’t make them release the show any faster :silly:

Psycho-Pass Anime Gets New Film Along With 2nd Season

posted on 2013-09-15 14:33 EDT
The first key visual for the second season and film for the Psycho-Pass anime was posted last week

Funimation has FINALLY remembered that they have this title. They’ve announced that the first 4 eps of the dub will debut in late January (after R;N, so does that imply an April release?). I believe that Funimation has been silent on this title for 5 months now (since AX).

They’ve also decided that, over the next 12 days (!!) that they’re going to release the cast of this show.

I don’t think that there’s any show that could live up to this level of hype. I predict a more-disappointing-than-usual journey through the mind of the “UroButcher”, though this one will have a superior dub than the others (though Funi did dub 2 lesser-known UroButcher titles and it didn’t help them).

Wow, they’re giving the anime veteran Jason Douglas a real role in this. He hasn’t had one of those in eons (kinda seemed to have been replaced by The Tatum).

Now I feel obligated to watch this, no matter how bad it is. I watched that horrible, horrible movie No Country For Old Men because Jason Douglas had a minor role in it and so I don’t think that quality is an excuse…especially since this show would have to be just about the worst anime ever made to be worse than that movie.

I don’t think that I’ve heard him since Horizon.