Genres: action, comedy, drama, magic, romance
Themes: animals as advisors, bishoujo, magical girl, secret identity, sentai, superhero
Objectionable content: Mild
Plot Summary: One day, Usagi Tsukino, clumsy 2nd-year middle school student (8th grader), stumbles upon a talking cat named Luna. Luna tells her that she is destined to be Sailor Moon, “champion of love and justice”, and she must search for the fabled Moon Princess. Usagi finds friends that turn out to be destined senshi as well, and together they fight to save the world from the certain doom brought upon by the Dark Kingdom (Queen Beryl, the generals, Metallia).
Number of episodes: 46
Vintage: 1992-03-07 to 1993-02-27 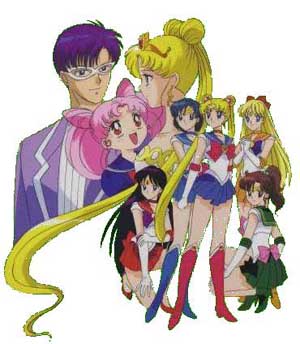 Genres: action, drama, magic, romance
Themes: aliens, bishoujo, magical girl, sentai, time travel
Objectionable content: Mild
Plot Summary: Sailor Moon R is split into two different arcs. During episodes 47–59, space aliens Ail and An, disguised as normal students, arrive on the planet. During episodes 60–88, Sailor Moon and the senshi fight against the Black Moon family (Rubeus, Dimando, Saphir, Esmeraude, Wiseman, etc.). We find out that Dimando is in love with Princess Serenity, and he wants her for himself. Chibi-Usa also arrives.
Number of episodes: 43
Vintage: 1993-03-06 to 1994-03-12 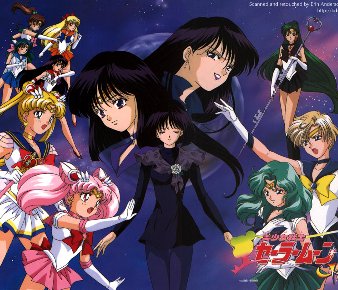 Genres: action, drama, magic, romance
Themes: bishoujo, magical girl, sentai
Objectionable content: Mild
Plot Summary: Sailor Moon and the senshi are up against a new set of villains: the Death Busters (Professor Tomoe, Kaorinite, the Witches 5, Mistress 9, Pharaoh 90). The Death Busters plan to rule the world by using the energy from the pure heart crystals of innocent victims, but Sailor Moon and the senshi must stop them. The outer senshi (Neptune, Uranus, Pluto, Saturn), also make an appearance, although Pluto appeared briefly in Sailor Moon R.
Number of episodes: 38
Vintage: 1994-03-13 to 1995-02-25 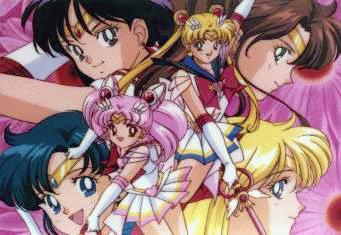 Genres: action, magic, romance, slice of life
Themes: bishoujo, henshin, magical girl, sentai
Objectionable content: Mild
Plot Summary: The senshi fight against the Dead Moon Circus (Zirconia, Nehelenia, the Amazon Trio, the Amazoness Quartet), who wants to ultimately take over the world. This season is heavily centered around Chibi-usa and her relationship with Helios (Pegasus).
Number of episodes: 39
Vintage: 1995-03-04 to 1996-03-02 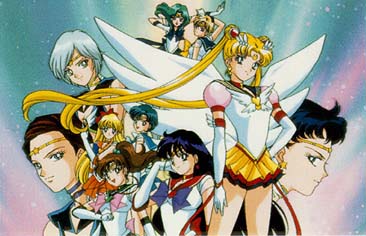 Genres: adventure, comedy, drama, magic, romance
Themes: henshin, magical girl, sentai, superhero
Objectionable content: Significant
Plot Summary: Sailor Moon Sailor Stars is split into two arcs; the first arc deals with an enemy they thought was dead: Nehelenia, who comes back with one intention—to destroy everything that Sailor Moon loves. After they defeat Nehelenia, a new threat comes from beyond the solar system, along with a new senshi, the Sailor Starlights. But determining whether they are friend or foe is harder than it looks. And on top of that, Mamoru has gone overseas to study and Seiya of the idol group the Three Lights is interested in Usagi.
Number of episodes: 34
Vintage: 1996-03-09 to 1997-02-08 Plot Summary: Usagi Tsukino was a normal second-year middle school girl whose own life changes one day when she encounters a black cat. The cat’s name is Luna who can talk and bears a crescent moon on her forehead. Luna tells Usagi that she is the chosen guardian of justice with the power to transform into Sailor Moon. Usagi now has a new responsibility which is a mission to find the Illusionary Silver Crystal as well as the other chosen guardians to protect the Moon Princess. During her mission, she must deal with various enemies sent by Queen Beryl who is also after the Illusionary Silver Crystal.

Ha! No idea about the real show, but that video was funny.

Video is hilarious as always with these people that think they are right.

This could be a rescue or could just be Funimation doing Toei a favor. The last one it would not be the first time a Japanese company has asked an American one to do the grunt work. I find it odd he/she so far is the only one that has gotten it. None of the other people with the episodes up have. Until they actually announce something it’s all moot point and speculation. Though given how much praise Nozomi got for Utena they may be thinking it may finally be worth it.

Its hilarious I lost a karma point for posting this video I found posted on Funimations forum.

I agree with you psychopuppet can’t prove it even happened. and Funimation did take down videos before of a Toei anime I think I heard before. but if you watch some of his videos why would those get removed before even a fansub would?

Let’s all fight the MAN!

Illegal activity for everyone!!!

I can’t decide if I found that funny or just sad. But I hope to God that she didn’t sub the clips herself. WOW!

I won’t get too excited about it. It could just be Funi acting on behalf of Toei, as they have done before. I do also find it a bit strange that only this person received a take down notice and not any others.

The part about fighting “YouTube Copyright” just made me shake my head.

Proving once again that ignorance knows no bounds!!

How could anyone take the time to create a video with such atrocious spelling and poor grammar?

Proving once again that ignorance knows no bounds!!

How could anyone take the time to create a video with such atrocious spelling and poor grammar?

But Shadycat, how could you forget that fansubbers and bootleggers are always perfect. They never make spelling or grammar mistakes! rolls eyes

SuperSimsBoy must be a 12 year old kid. Just the thought of someone older than that making this video scares me. Not only where there serious spelling and grammatical problems, but he kept talking about fighting “Youtube copyright”.
Slick

I think Slayers might be doing okay. I know Best Buy expanded the number of stores that sell it. But considering Heat Guy J pretty much went straight to a cheapo bargain collection, then had a price cut, I’d say that one didn’t do as well.

I think Sailor Moon would be something else entirely and would likely do well, as long as the asking price wasn’t too much, or Toei’s demands to unreasonable.

If I took a guess I would say Sailor Moon would sell as good as Dragon Ball Z. Season 1 & 2 never got a dubbed unedited release in america before. Who in their late 20s and older does not know about or watched Sailor Moon as a teenager?

If I took a guess I would say Sailor Moon would sell as good as Dragon Ball Z. Season 1 & 2 never got a dubbed unedited release in america before. Who in their late 20s and older does not know about or watched Sailor Moon as a teenager?

Just knowing/wathcing Sailor Moon as a teenager does not automatically guarantee and instant buy. A lot of things change as one grows:

…what once was your favorite show growing up, now as a ‘mature, experienced, intelligent’ fan you can’t get past all the plot holes, inconsistencies, bad art, bad va (both Japanese and/or English), etc. like you use to.

…you grew out of the genre. You still watch one every once in a while, but for the most part after seeing so many shows following the same formula, same cookie-cutter characters, same plot holes (no matter what genre or medium…it happens in music too) you grow tire of it and move on to…

…a new genre. What once was inconprehensible, or boring, as a little kid, now makes all the more sense in the world like hard sci-fi, drama - both political and personal, etc…and jazz.

…or one just grows out of anime period.

I used to watch this and Tenchi when I was younger, Never really got into Dragonball Z and hated Gundam wing, Those are the animes I remember on tv before the year 2000.

If Sailor Moon was released by Funmation I am not sure I want to buy it, Tenchi ovas I know I will buy.

Well, Sailor moon, was a pretty big title in it’s day. Some kids that are now out of college watched it as kids, even ones that never became anime fans. it might be one of the pop titles I never knew why it was never picked up, OR polished off, for the season never officially translated.

I am not comparing it to DBZ mind you. But compared to many “saved” titles that were never aired on broadcast syndicated TV, it just made me wonder.

When you ask Americans what titles they mostly associate anime with, it’s either Sailor Moon or Dragonball. It will put up Dragonball numbers.

I myself do not see Sailor Moon doing all that well. It may have a soft spot for older anime fans, but has been copied badly so many times, that people are now weary of the genre. I’m sure it would make money, but not DB money.
Slick

When you ask Americans what titles they mostly associate anime with, it’s either Sailor Moon or Dragonball. It will put up Dragonball numbers.

That’s what I think also, If you ask a non anime fan(not a kid or a teen) what they think about anime they would think of Sailor Moon or DBZ there might be a few others but those are the big ones.

Think of it this way some 30+ year old that grew out of anime that liked Sailor Moon when it was on tv as a teen, that wants to buy a show for his/her daughter. If you look for it costs way to much even the legal boxsets are sub-only for the first two seasons. They will most likely then buy something none anime, the previews on dvds are their for a reason. I know because I grew out of anime for over 5 years, I came back because I randomly bought a few collections because I was really bored. I bought Maburaho & Kaleido Star I picked them for the pictures on the covers they got me back into anime, I loved them.