Aria The Animation / The Natural / The Origination (TV Series)

Genres: magic, science fiction, slice of life
Themes: gondolas, iyashikei
Objectionable content: None
Plot Summary: On the planet Aqua lies the watery city of Neo Venezia, a tourist hub in which people travel around in gondolas. Professional gondoliers known as Undines are well-revered as they act as tour guides for the people. Akari Mizunashi is a gondolier in training and also an employee of Aria Company. She gets to meet all sorts of people as she takes them on the gondola rides, from friendly mentors to special individuals, all this amidst the beautiful scenic backdrop of the entire city.
Number of episodes: 13
Vintage: 2005-10-05 to 2005-12-28 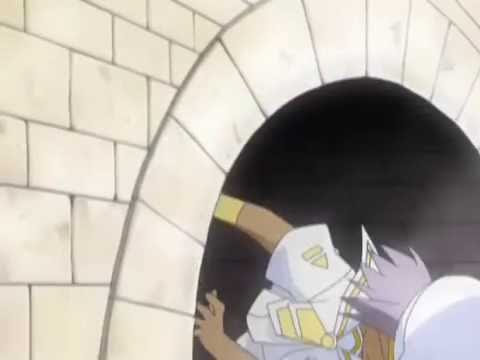 Genres: science fiction, slice of life
Themes: gondolas, iyashikei
Plot Summary: In the continuation of the last series, Akari Mizunashi continues her job as a gondolier along with her friends from the other two rival companies, Aika and Alice. As they continue their training to become Undines, they continue to meet new people and partake on mysterious adventures, all in the quiet, scenic and peaceful city of Neo Venezia.
Number of episodes: 26
Vintage: 2006-04-02 to 2006-09-24

Genres: science fiction, slice of life
Themes: bishoujo, coming of age, futuristic, gondolas, iyashikei, moe
Plot Summary: It is the year 2301. Man has terraformed Mars into a beautiful water planet, and has renamed it “Aqua”. Built upon it is Neo-Venezia, an exact replica of old Venice, with beautiful waterways, palaces and plazas. Akari Mizunashi, a 15 year old girl arrives from Man-Home (formerly known as Earth) to become a gondolier trainee at a company called Aria Company. The company is lead by Alicia Florence, one of the three best gondoliers, also known as the three Water Fairies. Trough hard training, Akari aims to become a Prima herself. Many encounters and mysterious events are sure to follow on this planet of miracles.
Number of episodes: 13
Vintage: 2008-01-07 to 2008-03-31

This is an anime I have been debating about buy for a while. I missed the preview at Anime Convention. If like what I see, most likely buy the CD to add to my collection.

I believe it’s because YouTube selects one frame of the video, which is from the official trailer.

I believe it’s because YouTube selects one frame of the video, which is from the official trailer.

You are correct sir. I believe the frame is the exact middle of the video, so it would come from around the 1:02/1:03 minute mark.
Slick

I was actually thinking a few weeks ago that Anime Network really needed to get some of Right Stuf’s shows. But until the Enoki deal, I didn’t think they would actively go after sub only shows. I’m glad I was wrong, and now more people will have a chance to experience Aria.

It’s a very calm and relaxing show, but it’s very enjoyable. The characters are quite lovable, and I found myself addicted to it after just the first episode. I highly recommend this show, though I know there are some fans out there who would be bored to death by it.

I’m not too surprised to see these turn up on TAN, TAN seems to have traditionally been the home for a number of the shows RightStuf has imported/distributed/dubbed - for instance Boys Be, To Heart, Shingu, Ninja Nonsense, and … crap, drawing a blank on the last one, but it’s the one that was on TechTV’s Anime Unleashed ages ago. I hate it when I know the name of something and can’t pull it out of my brain.

Yes! I couldn’t even find the name by scanning my RightStuf! catalog.

All Anime Network needs now is The Third and I believe they will have most of Right Stuf’s recent catalog.

Ug. This is being shown as a Sub?

This anime does go between incredablely well drawn to really crude.

Consider the wall of text that show up for 5 seconds, I hard to watch one or other. Annoyingly the wall of text happens during some of the more beautiful drwan scences. Even more annoying is the Anime network symbol blurs out the text.

I can understand this being shown as sub. If a person were to say what was written it would not long fit in the correct time space. It also must be a fairly direct quote, most of the time what the character were saying made little sense. One line looked like they just wrote what the character was saying with out translation.

It’s only released as sub only there is no dub.

Yeah like PP mentioned it’s only a sub-title release. Most of RightStuf/Nozomi’s releases are subtitle only.

Subtitle production for VOD is a little trickier than DVD, there are more limitations with the technology with various factors. I did notice that when I watched it last night and I’ll let Anime Network know for the future to see if there’s room for improvement. But again, there are various factors that make it a complex problem. The only hard part I think really is harder to follow was during moment when there was a vocal song in the background and that was translated too, it merged with the actual onscreen text and that part was confusing with the text popping off and on.

As far as the subtitle lines… RightStuf/Nozomi sticks as close as possible, most of the RightStuf buyers are otakus and they demand translations that are not varnished by Americanization. RightStuf is also consistently one of the most praised for the highest quality releases overall out of anyone… so they are certainly not doing anything wrong in terms of that.

They are a gold standard and Aria’s release got them the prestigious Anime On DVD 2008 DVD of the year award for a reason.

Thoughts on the actual series later on. But I will say I really enjoyed it, and I’m going to be sad and jealous if this is only a sneak peak for free VOD. I want to see more pronto, and I want SVOD! B)

My wife will not watch Subs.

Considering this is a sappy for the moment non-violent and not overly sexual show, it would be the prefect Anime to watch together. She won’t watch cause its a Sub.

I was aware of the anmie winning the Award.

Now, I remember why I did not buy this Anime, I was waiting for the dub version.

I watched the first of this tonight and rather liked it. Cute, interesting but won’t make you think too hard. At least not yet.

Anyone who won’t watch a show because it’s subtitled is only missing out themselves.

I was thrilled that Anime Network made a deal to have the North American premiere of this series.

First episode struck me as potentially great, but it’s too early to draw any conclusions on what’s to come. I need to see more to make out more of the series. It was your usual get to know the characters and their lives episode, but this is what Aria is about… about the relationships of the women in the Aria company, how they relate to each other and what they do. It’s a relaxing and interesting storyline and group of characters so far…

The atmosphere of the series is awesome. The art and character designs are fantastic. One really could feel like they’re being drawn into this tourist destination with the gorgeous visuals and the music is some of the best I’ve heard in Anime in a while… from the flamenco inspired guitar number to the classical string pieces.

My favorite characters so far are Akari and Alicia.

Elegant and understated so far, it has all the elements of a great show and I hope for the show’s sake it’s as good as the critical acclaim – I’m in need for more great shows to watch.

Can’t wait to see more… problem is for us free VOD viewers, will there be more or not… remains to be seen.

Saw the first episode and really enjoyed it. I went into it rather skeptical, too. I’m glad I decided to check it out. I hope that they release a dubbed version of this.

This is one of those shows that a dub would serve no purpose, I like it though, I have only seen episode one, see I saw the first episode fansubbed before it got licensed, so I knew at least episode 1 is good.

Mita why do you think a dub would serve no purpose? I agree from a financial sense it wouldn’t, but that’s true a lot of anime nowadays in this market.

But, what I would give to hear ADV/Amusement Park Media production with ADV’s VAs dub Aria… No one does girl themed/characters with girls better…

Before that happens though, RightStuf should contract ADV to dub SuperGals season 2. B) If that ever happened, I can retire from buying or watching more anime, satisfied and content. lol

I think anyone waiting on a dub is going to have a long wait ahead of them - not because this is a bad show, but because even if the market does a 180’ turn and gets big again, by the time that happens this will be old and there will have to be demand to the point that poop on a stick gets a dub because it’s new and hot and importers will start looking at their older titles to re-release.

Yeah a dub is not viable at this time. RightStuf that licenses Aria has chosen sub-only route for a while now and it’s working well for them. I don’t see them coming back to this with a dub.