Plot Summary: Okajima Rokuro is a Japanese businessman…in a town full of Japanese businessmen. His normal day consists of social drinking with clients and being kicked around by his bosses. He finally gets a break though, as he’s sent by his company to the tropical seas of Eastern China to deliver a disc…only his boat gets hijacked by a band of mercenaries that were hired to steal it. “Rock” (as he is newly dubbed by his captors) catches the interest of the only female merc “Revy” as she thinks he’s worth a ransom, taking him hostage. However, the disc turns out to be more trouble than its worth, and complicates things both for Rock, and the mercenaries known as Black Lagoon. 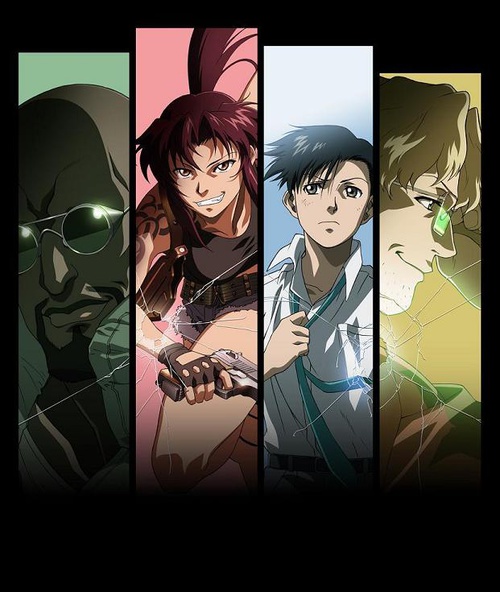 Plot Summary: Okajima Rokuro - now known almost exclusively as ‘Rock’ - was once a typical, put-upon Japanese businessman. Then, on a routine business trip, he was kidnapped and ransomed by the Lagoon Company: a band of mercenary pirates operating out of the crime-riddled city of Roanapur. Abandoned by his bosses, he joined the Lagoon Company. Now he must try and stay afloat amongst the ever-shifting politics of the criminal underworld, while simultaneously avoiding death at the hands of his quick-tempered, gun-toting co-worker, ‘Two Hand’ Revy. 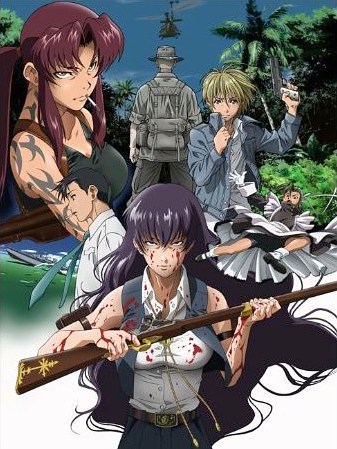 Plot Summary: The assassination of the head of the Lovelace family in Venezuela sets his maid, a former terrorist named Roberta, on a bloodthirsty quest for revenge at any cost. The search for the culprits leads her to Roanapur, causing a massive commotion in Thailand. Garcia, heir of the Lovelace legacy and someone who regards Roberta as a precious family member, also travels to Roanapur and wants to make a deal with the Lagoon Company.

Was reminded that I really wanted to make this thread since it is my favorite anime of all time.
Blazing guns, blood, vulgarity, crass humor…I mean, what’s there not to like.
Not to mention, the OP song is probably one of the strongest I’ve heard to date, as well as it being one of my all time favorite OP songs. The soundtrack over all is really well done as a matter of fact.

This is pretty much a collection requirement for anyone with a Girls With Guns fetish.

I love this show. It’s such a great action show it’s not even funny. It’s very hardcore, kicks ass, and just rules! The best dub I’ve heard in a LONG time, one of the best ever made in my opinion. The second season is even better then the first IMO. I cant wait for the third season. It’s a solid 9/10 for me.

I wholeheartedly agree, it’s one of the best dubs I’ve heard to date.
I can’t wait for Season 3!!!

Though it makes me wonder if it’ll ever make it over here.
Geneon USA did the first two seasons, and Geneon still owns the license for both, but since they closed down R1 production, that kinda leaves the 3rd in limbo in R1 land unless someone else grabs it. And if that happens, we have no guarantee that they’ll use the same dub cast to reprise their roles.

I bought Season 1 mostly because of the rave reviews I saw here, when Best Buy had their 50% off sale. It blew me away, couldn’t believe it was so good, I mean the first episode I liked, but the way they took out the helicopter in the second episode is what hooked me through the bag on this one.. Best more or less blind buy I ever made (never checked it out online or looked at a preview or anything). In some ways it’s kind of like The A-team on speed. Well, and with a lot better aim. And girls aren’t just eye candy. Okay, so much for that reference.

Even the cars are well drawn, someone was a fan of late '60s Mopars with the Plymouth Roadrunner (red) and Chrysler New Yorker (green 4-door) you see in some of the episodes so well-represented that the few times things are distorted (mostly on in-car scenes) it’s completely forgivable. Heck, the green on the Chrysler is a good representation of a factory color for those. Have to think they were done CGI, but the integration is excellent. I’m not a boat person (ha!) so someone else will have to vouch for that stuff.

This is one of the few anime where I prefer the dub over the Japanese voices. I prefer english dub because this is fucking awful.

Edit: Seriously…? I can’t LINK to a fucking youtube vid? It automatically inserts it into my post? =\ I fucking hate this new forum. <___<

I love black lagoon. Interesting characters, fun plots, kicking action. I was so glad funi with geneone was able to bring over season 2 after geneon closed it’s door. I really hope Funi picks up season 3.

So, my uncle visited this past week, and I forced Black Lagoon on him while he was here.
He’s not much of an anime fan, so he hasn’t seen but a handful of things, he did however think it was rather awesome.

Interestingly enough, watching it with him made my third time seeing this series all the way though since they were bought for my birthday last year. I’ve also been working on a fourth time through with my best friend/roomy, but that’s slow going, so we may not finish it for a month or two yet. It’s already been a month and a half since we first started it right after finishing Death Note (which she also enjoyed).

Was only going to watch 1 DVD yesterday, but ended up watching 2 because it is sooooooo awesome. I love the English dub, the dirty language just fits so well…ahhh I need to go watch more ^______^

Oh yes this show is addictive. Action packed, gritty, dirty, bloody, and fun! Also quite disturbing and dark times, especially the second season. I love how well they flesh out Rock and Revy, and even devolp the minor characters very well! They give Dutch and Beny the shaft though, and by the end of the second season we still barely know anything about them. But I’ll forgive them because they handle Rock’s devolpment perfectly, love the funny bits with him trying to live the pirate life.

As far as the dub goes, perfect. perfect in every way, shape and form. Amazing script, perfect words choses at the perfect time. The cursing really does make it all work. And every actor is amazing. One of my all time favorite dubs. I think this may be the best dub ever made…no joke. It’s THAT good. This is why Ocean needs to get more dubs, and NOW.

lol for somewhat the same reasons I put it in a top 35 list of mine for the decade.

Oh yes it’s easily one of my favorite action anime series! There’s really nothing else like Black Lagoon.

Oh yes it’s easily one of my favorite action anime series! There’s really nothing else like Black Lagoon.

It’s definitely my number one all-time favorite, and I have yet to find anything that will beat it out of that spot.

It bumped GetBackers out of my top 5

I have heard from other sources that Black Lagoon sucks compared to the manga version. Has anyone read it?

I skimmed it to look at the artwork. Does that count? I think I read a page or two awhile ago. That count? And the original character desings look interesting. I like Madhouse’s better, but the original character designs have charm of their own. Anyway I think the anime follows the manga pretty closely, not like Monster does, but it’s still pretty tight. So reading the manga would be like looking at stills of the fight scenes, which would be less interesting (for me), especially if it follows the manga tight. (I don’t want to read what I just watched) You might get more backstory and conversations and stuff in the manga though.

Can’t hurt to try the first volume or two though, Viz is treating their Sig line amazingly well.

Finally finished season 2 of Black Lagoon a few days ago. I have to agree with the group that this is one of the best anime made. I really loved how even the secondary characters are interesting. Just got to love Balalaika, Edna and Roberta. The action scenes are just amazing. Agree that it has an excellent dub and hope the cast is brought back for season 3 if it gets licensed.

Since season 3 will be an OAV they should be able to push the envelope more since the TV censors are now out of the loop.

YouTube video to break your brain. Warning some spoilers for season 2.

That video is awesome!

So it looks like the 3rd Season OVA will be named:

The Japanese release will be on July 17 and will be 5 episodes long.

I hope one of the companies gets this!
I don’t care who, as long as they dub it with a reprised cast!

Glad were getting more Roberta and also hope we get the same dub cast.