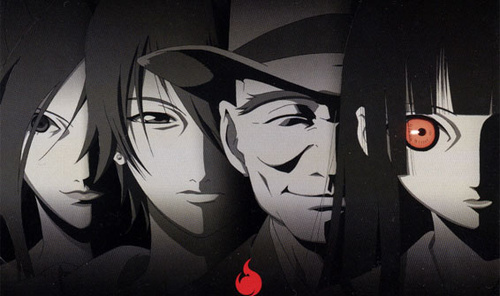 Genres: drama, horror, mystery, psychological, supernatural
Themes: comeuppance, death, hell, revenge, tragedy
Objectionable content: Significant
Plot Summary: Somewhere in the vast sea of the Internet, there’s a website that can only be accessed at the stroke of midnight. Known as the Jigoku Tsushin, rumor has it that if you post a grudge there, the Jigoku Shoujo will appear and drag whoever torments you into the inferno. Very little is known about the girl - all we know for sure is that she lives with her equally enigmatic grandmother, that three magical straw dolls accompany and serve her, and that whenever a posting on the Jigoku Tsushin moves her, she becomes the Jigoku Shoujo.
Number of episodes: 26
Vintage: 2005-10-04 to 2006-04-08

Genres: drama, horror, psychological, supernatural
Themes: death, revenge
Objectionable content: Significant
Number of episodes: 26
Vintage: 2006-10-07 to 2007-04-07
Plot Summary: Ai Enma once again returns as the Jigoku Shoujo, who uses Jigoku Tsuushin (Hell Hotline) to allow people to post their grudges on their tormentors, sending them straight to Hell. In exchange, the users of the website will end up in Hell after they die. Meanwhile, a mysterious girl with purple eyes called Kikuri appears and seems to have strange intentions towards Ai and Jigoku Tsuushin’s operation.

Genres: drama, horror, psychological, supernatural
Themes: death, revenge, school life, tragedy
Objectionable content: Significant
Number of episodes: 26
Vintage: 2008-10-04
Plot Summary: After Ai Enma’s supposed death after the events of the 2nd season, her three helpers, Ichimoku Ren, Wanyuudou and Hone-Onna live out their lives in relative peace. This is suddenly shattered when Kikuri returns to recruit them. Meanwhile, Ai mysteriously reappears from the dead and uses the body of a young schoolgirl, Yuzuki Mikage, to continue the Jigoku Tsūshin operation. Yuzuki is aware of Ai’s presence however, when she can see what Ai sees.

Number of Episodes: 12
Vintage: 2017-07-14
Plot Summary: Hell Girl Enma Ai and her group return for another series to continue their task of transporting cursed people to hell. New questions arise when a previously unseen girl dressed in green appears before them. As her appearances grow more frequent the mystery behind her purpose is gradually revealed even as the task of carrying people to Hell continues.

There is something about Hell Girl I have been wondering about. What religions Hell are they being sent to? In some Asian religions Hell you are there to you have payed for your sins. At that point your memory is erased and you reincarnate. My first thought was Shinto but as practiced that covers the living. Issues dealing with death are handled by Buddhism. In Buddhism your stay in hell is based on your Karma from what I can tell. After your time in hell is up you are reborn into one of the higher worlds.

Buddhism ( /ˈbʊdɪzəm/ or /ˈbuːdɪzəm/) is a religion and dharma that encompasses a variety of traditions, beliefs and spiritual practices largely based on original teachings attributed to the Buddha and resulting interpreted philosophies. Buddhism originated in Ancient India sometime between the 6th and 4th centuries BCE, from where it spread through much of Asia, whereafter it declined in India during the Middle Ages. Two major extant branches of Buddhism are generally recognized by s Buddhist sc...

Shinto (神道, Shintō) or kami-no-michi (among other names)[note 1] is the traditional religion of Japan that focuses on ritual practices to be carried out diligently in order to establish a connection between present-day Japan and its ancient past. Shinto practices were first recorded and codified in the written historical records of the Kojiki and Nihon Shoki in the 8th century. Still, these earliest Japanese writings do not refer to a unified religion, but rather to a collection of native beliefs...

thank god for my dvr

No kidding. Unlike Speed Grapher, I’ll have College the next day of the episodes so I wont be able to just stay up and watch them. Hooray for DVR!

There is a reason I was wondering about the above. A temporary stay in Hell while you are redeemed of your sins is not as harsh as a permanent stay. If it is temporary it would explain why some are willing to use Hell Girl.

She never necessarily implies that is forever nor momenarily, but with how she states the characters will visit hell, logic dictates forever. So you could assume it is whatever religion has the eternal stay in hell.

That would most likely be a Western one but it does not have that feel.

For anyone coming into this series late, most of the episodes are standalone, so they can be viewed out of order.

If I may correct myself from what I said earlier. In episode two of Hell Girl Season 1, the older woman actually says to the girl in this episode that she will spend an eternity in hell if she breaks the string, joining the covenant.

It looks like IFC is not going to be showing the final episodes of this. I have no idea why not.

I noticed. How many are left for this season? I looked on their site it doesn’t say anything about a show after Hell girl either.

[quote=Diclonius]
I noticed. How many are left for this season? I looked on their site it doesn’t say anything about a show after Hell girl either. :([/quote]

Just one episode, #26 ‘The Ephemeral’

I can only see through October 28 November 5 and it looks like they’re showing horror movies and other stuff in that time slot for now.

Amazing show is amazing? I think so! Here’s hoping the second season will be just as good as the first! Becuase man that ending was dramatic and tense! What a way to end the show! Let’s hope it keeps up the quality though!

Wolfo was the big fan of this series back in the day when Hell Girl first came up here 2 years ago… He said in the thread while we were watching it on IFC that season 2 was where the series got a lot better. Some other series fans seem to say Hell Girl 3 is best. Hopefully if Season 2 does well, Sentai will pick up the rest!

Well that’s good to hear. Because I LVOED the first season. There was one episode that I didn’t like, but all the other episodes were top notch. I really liked the episodes that would through a twist or two out there though. Those were the best.

I’m sure a lot of you remember my thoughts of it when we watched it. The production and music is gorgeous, but I felt the story got really repetitive with the similar episodic nature of the set-up. Flaws aside though I always thought it was a good series. My favorite parts of season 1 were the less episodic episodes with the photographer. I hope there’s more longer arcs in Season 2. Either way, will definitely be watching it.

I never felt it was too repetitive myself

. Going to have to disagree with you there. This is a Paranoia Agent storytelling style IMO, and it’s used quite well. And besides Cowboy Bebop is ENTIRELY episodic and repetitive and people won’t shut up about how good that is

. My favorite episodes were the ending arc, and the “twist” episodes, but I liked everything except that one “doll episode”. Felt totally out of place and just wans’t a very good episode (also it was kind of confuseing). Hell Girl vs Hell Boy (Greg Ayres :P) was an interesting episode too. And yeah I liked the photographer and daughter episodes. I liked how he was 100% against people useing Hell Girl, while his daughter kept asking “why? aren’t those people BAD? Don’t they diserve to go to Hell?”. I LOVE LOVE LOVE stuff like that. This is quite a deep series.

Eh… comparing Hell Girl where every episode is about revenge and what happens at the end to PA or CB, that’s really stretching it.

You’re the first one I’ve heard to complain about CB being repetitive vs everyone here, even those who liked it said HG S1 was repetitive.