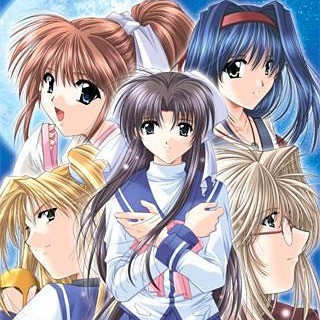 Genres: adventure, comedy, erotica, fantasy
Objectionable content: Pornography
Plot Summary: My name is Toma Hikaru. I go to Izumo Gakuen High School with my younger sister-in-law Miyuki, my childhood friend Nanami-chan, and Nagisa who thinks of me as a rival. I began to have a strange dream of a beautiful, naked shrine maiden praying in a lake. I don’t know who she is but, somehow, I think I know her. I also see a strange room within Izumo Gakuen in my dream. Feeling uneasy, I decide to sneak into the room. Little did I know that this was the beginning of a long journey.
Number of episodes: 5
Vintage: 2003-01-25

Genres: action, adventure, fantasy, romance, supernatural
Plot Summary: Yagi Takeru has been living in the Touma family’s house since his parents are gone. He was raised by Touma Rokunosuke, the head of the house. He is surrounded by many people such as Yamato Takeshi, his best friend-cum-rival from the kendo club, the Shiratori sisters, Kotono and Asuka, and his childhood friend, Oosu Seri. Life has been blissful until one day, an earthquake strikes the school and everything changes. Takeru awakens to find that the school looks as if it has been abandoned for centuries and reduced to ruins. He also realize that all the teachers and students have disappeared as well. He meets up with Seri and Asuka and they fled from the ruins, only to realize that the town they used to live in is completely empty. Subsequently, people wrapped in cloaks appear before him. They were told that they have been brought to another world.
Number of episodes: 12
Vintage: 2005-04-03 to 2005-06-19

Why can’t I buy this anime? I hope it gets a dub before its released.

Never heard of it man, what’s it about?

Enoki was never able to find a licensor for the show and they’ve had it for a while, so I doubt there is much chance of a DVD release. The chances of a dub are even lower. TAN’s license is only for TV and Streaming.

Watched it on TAN and enjoyed it.

When you start an anime thread, please make the first post properly.

This show will be expiring from the Online Player Wednesday, April 13.

If you haven’t seen it yet, now’s the time!

Crunchyroll Adds Izumo: Flash of a Brave Sword and More to Anime Catalog