Genres: action
Themes: war, weapons
Objectionable content: Significant
Plot Summary: The series follows Koko Hekmatyar, a young arms dealer who sells weapons under HCLI, an international shipping corporation that secretly deals in the arms trade. As one of the company’s unofficial weapon dealers, she secretly sells weapons in many countries while avoiding the local authorities and law enforcement as most of her work is actually illegal under international law. Traveling with her is her team of bodyguards who are mostly composed of ex-military veterans. Her latest addition to her crew is Jonah, a seemingly emotionless child soldier who is skilled in combat yet ironically hates arms dealers. Jonah joins Koko as he wishes to find the arms dealer responsible for his family’s death. What follows is Koko and her crew’s escapades around the world.
Number of episodes: 12
Vintage: 2012-04-10 to 2012-06-26 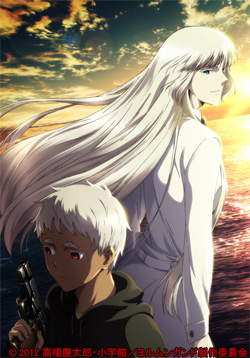 Genres: action, drama
Objectionable content: Significant
Plot Summary: Koko Hekmatyar, is a arms dealer that travels the world selling weapons along with her elite guard, in order to bring about a peaceful world she will have to juggle the CIA and other organizations so that she can execute her plan that will end all wars in the world, and so she puts her plan into action.
Number of episodes: 12
Vintage: 2012-10-09

The wraparound jacket band on the 10th volume of Keitaro Takahashi’s Jormungand manga is announcing on Monday that a television anime adaptation by the studio WHITE FOX (Steins;Gate) has been green-lit. The story centers on an underground weapon seller and her accomplices, and it begins when a quiet boy who hates weapons joins the team.

The action manga began in Shogakukan’s Monthly Sunday GX magazine in 2006, and it will end in the February 2012 issue on January 19. Viz Media began releasing Jormungand in North America in 2009, and the company’s English edition of the eighth compiled book will ship on January 10.

Man!
There’s so much this season that catches my interest!
This one looks like a cross between Canaan & Black Lagoon, and if it’s anything like that, I’ll enjoy the hell out of this one.

An arms dealer whose crew member has one of those fetish eye patches?! I don’t know when that detestable style of eye patch came into vogue; Baccano wasn’t that long ago and it didn’t use that style for the eye patch.

I can kinda see the Black Lagoon in this (I wish this had Black Lagoon’s art), but the story behind the protagonist reminds me more of the main male leads’ in Gundam 00 and FMP. That’s not really a good thing; “You knows it!”.

Why are there so many east Asians in Africa? I guess I’m forgetting the basic rule of Anime settings: when an anime series is set in a “real” country that isn’t Japan, the setting can’t be expected to be a realistic depiction of that country. Instead it is a combination of Japan and the stereotypes and beliefs that the Japanese have regarding that country. (See the depictions of America in Patlabor and Golgo 13, for example)

More importantly, where will this stream (please tell me somewhere besides just niconico)?

I am thinking Baccano! did not use that style eye patch due to the era in which the story was supposed to reside. But I agree, it is kinda popular all of a sudden.

This looks like it will fill the gun void in my life.
=D

and in several years we can see it dubbed, with Britney Karbowski and Todd Haberkorn as the main leads

And that’s only if they decide it did well enough streaming to actually pick up the home video rights later.
Since, from the PR, it sounds like it’s only going to be streaming rights currently.

Hopefully streaming it will be something that I can test out on the new Funimation app.

An extended preview has been posted.

Are you excited for this new series? You can find out more information on the official website at http://www.funimation.com/jormungand[/quote]

What did you guys think of it? Did it get awesome by the end of ep 2?

The way I saw it was to take Black Lagoon, take Balalaika’s Russian Mafia squad and replace them with a hodgepodge of stereotypes (like Night Raid’s commando team), and then replace the cool, calm, badass Balalaika herself with the main chick from Angel Beats.

Episode one said to me: “If you don’t like spazzy moe girls in a contrived leadership role then this show isn’t for you.” Did ep 2 deliver something different?

Now that Funi is simulcasting this, and it’s the only thing that they have that is remotely interesting this season (AFAIK;IMO), I want to know.

I’m still waiting for it to pop up on Nico.
You need to login to watch it on the FUNi player and I don’t feel like making an account just to watch the 360p free version.

Wow, Funimation got Hatchin? That was…unexpected, and probably disappointing. Hopefully the dub won’t be too brutal (and might improve upon the ending) but I am interested to know why/how Sentai got the disappointing Alison and Lilia a while back instead of this.

Though thanks to internet reposts like this I don’t miss much by not attending the Expo. Nice.

…HOW did this show get a second season? I knew that the stereotypical fanboys go ape over Haruhi clones with reverse harems (umm…Freud?) and guns, but I was seriously hoping that the ultra-fugly art of said Haruhi clone would torpedo the fanboy appeal.

Sadly, that didn’t happen. Haruhi + reverse harem + guns overpowers a heinous “plot” and awful artstyle. I guess it doesn’t matter to the fanboys what the Haruhi clone looks like, as long as she acts like Haruhi. That’s kinda scary.

[quote=“celestial_being”]
HOW did this show get a second season?[/quote]
It was planned as a split-season from the very beginning.
If you read FUNi’s AB PR I posted you’d know that.

Perhaps I wanted to “bury my head in the sand” and hope that the suck would go away.

I probably did read it, I read most everything on here (when I’m on), but like everything else with that show, I’m trying to repress it.

At least in Book of Bantorra when they gave us a character with a face straight out of a nightmare (Hamyuts) they gave us other, ahem, “assets” to compensate. The fugly chick in Jormungand doesn’t have anything else “going for her”.

It’s not just the fugliness, she’s also a bit “special” and completely unbelievable in her role, but I don’t think anyone really cares about the “plot” of Jormungand. They’re watching it for something else, obviously, and I just can’t figure out what that is. Maybe it’s because the whole Haruhi archetype doesn’t appeal to me? Oh well. Maybe the dub will be good. The dub made Book of Bantorra watchable, after all. 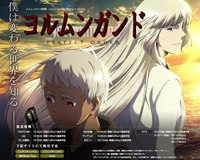 The official website for Jormungand Perfect Order, the second season of the anime adaptation of Keitarō Takahashi’s Jormungand manga, has announced that the season will begin airing on Japanese television at 0:30 on Tuesday, October 9 (effectively at 12:30 a.m. on Wednesday, October 10). 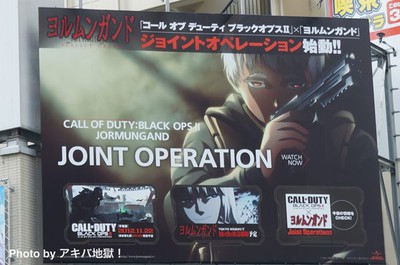 A billboard at the Chūō Dōri road in Tokyo’s Akihabara district is revealing on Thursday that a “Joint Operation” is launching between Keitarō Takahashi’s Jormungand manga/anime and the American first-person shooter game Call of Duty: Black Ops II. The October issue of Shueisha’s Monthly Sunday GX magazine had revealed on Wednesday that a collaboration between Jormungand and an unnamed, “hugely popular” game is in the works.

The manga about a female arms dealer and her accomplices ended this year, and Viz Media will publish the 10th of its 11 volumes in North America next January. The manga already inspired an anime season that aired earlier this year, and the second season, Jormungand Perfect Order, will premiere on October 10.