The Demon Lord's Den of Iniquity

The ramblings of a slightly mentally ill Lord of Darkness. Read below at your own risk. You have been warned!

So I came across one of those bleeding Halloween candles, and I thought of brilliant idea for new merchandise for Brynhildr in the Darkness. Scented, bleeding candles of your favorite witch.

Just imagine the scent of vanilla, cinnamon, or KY Jelly filling the air as your favorite lady slowly turns to soup.

What do you guys think? I could totally pull this off.

So I came across one of those bleeding Halloween candles, and I thought of brilliant idea for new merchandise for Brynhildr in the Darkness. Scented, bleeding candles of your favorite witch.

This is the best idea I’ve heard in a long time. If you need some support on this, please let me know, I might be willing to buy in.

There are other fun uses for wax… in my dungeon.

The only issue I think would be trying to pick out just the right scent for each girl. I was thinking Kuroneko could be blackberries and cream. I think the combination suits her well, especially given the colors of her uniform.

The rest of them though, I’m not so sure. I mean, what does a quadropalegic gothic loli smell like??? So many questions…

Now @Slowhand, as for those other was uses, we shouldn’t discuss those publicly…

Sure we should! Public discussion is a good thing.

And welcome back Demon Lord!!! You were missed. I know you’ve been busy leading your Army of Darkness. To where or what, I know not, and I don’t think I want to know. Ever.

The rest of them though, I’m not so sure. I mean, what does a quadropalegic gothic loli smell like??? So many questions…

They smell of Pine-Sol… & sometimes bleach. Although if you don’t like the smell a little gasoline before you light the candle never hurt anything.

Hmm, well I’m sure somebody would buy that. I’ve smelled some really disgusting candles and incense before. My boyfriend burns sage to “clear evil spirits”, and I find the smell repulsive, but he loves it. You could say that the sage is repelling me…

In honor of my screen name, I’m curious if anyone else remembers that animated film “The Flight of Dragons”?

There was an art book with the title, which lightly inspired the look of Rankin and Bass’s designs. However, the story is actually based on a novel called The Dragon And the George. It’s the first novel in the Dragon Knight series by Gordon R Dickson. Sadly, Dickson passed away and the books have been out of print for sometime, but you can still locate used copies at reasonable prices. I highly recommend them.

Also, the Rankin Bass film is available via MOD DVD from the Warner Brothers Archive series, and is available digitally on Amazon Video and iTunes. 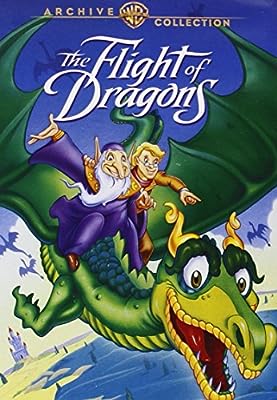 A fan made trailer for Flight of Dragons

The move intro, including its trademark song. Rankin/Bass always had some interesting themes for their movies and specials.

So, I’ve said some of this before, here and at other places. But with the news of “BIG, BIG, changes”, I feel the need to ramble a bit about Sentai, the Anime Network, and their place in the industry.

First of all, I think it goes without saying that Sentai needs to team up with more industry players to compete against the combined might of Funi and CR. They already have working relationships with several of the U.K. and Australian publishers, who they have sublicensed series to and even coauthored and coproduced releases with.

Now generally, Sentai seems to take inquiries and offers from the various companies, and goes with whoever negotiates the best deal. In the U.K., sometimes that is Animatsu, sometimes it’s MVM. In Australia, they originally worked almost exclusively with Siren, until management changes there, and then worked closely with Hanabee. Now, they seem to shift back and forth between Madman and Hanabee, depending on the title.

Since Funimation reps have stated in an interview that they want to expand more in the U.K. And Australian markets, and have already started releasing more titles in both themselves (through both Anime Limited and Universal Home Video.), they could potentially squeeze the local publishers out of those market slowly. More and more Funimation distributed titles means less for Madman for sublicense.

Perhaps the time has come for Sentai to truly just partner up with one company in each market. The three companies could share authoring, production, and dubbing costs. All titles could be made region A/B, or even include Latin America with Spanish and Portugese subtitles. This would also allow the U.K. and Australia to have a shot at the truly spectacular collectors editions that Sentai has been putting out, and allow them to sell Blurays that they otherwise wouldn’t sell enough to author themselves. Not to mention, sharing costs could allow them to increase their dubbing production on new titles, or even go back and dub select older titles. Adding Spanish subtitles and additional regional coding would allow them to expand into an entirely new market. They could experiment with a few bigger releases to see if there is enough demand to warrant the cost.

Now as for Anime Network, it’s really in a position where it could become a prime competitor for Crunchyroll. With Funi and CR splitting dubs and subs between the two services, TAN could become a haven for fans who would like access to both, and titles that CR and Funi don’t have.

Adding a commercially supported tier would be key. TAN has lacked one since Hulu changed its business model inside the US, and has lacked one for even longer outside the US. This would open up their simulcasts, with a delay, for those who don’t subscribe. Some ad revenue is better than the zero revenue received when “fans” pirate a show.

Adding some shows outside the Sentai/ADV/Aesir/Maiden Japan extended family would help as well. One would hope that Media Blasters, Aniplex, Nozomi, and Discotek would realize that allowing CR and Funimation to corner the entire streaming market will be bad for their long term business prospects. If they continue getting the vast majority of shows each season, there will come a point where there will be nothing worth licensing left over. Hell, between Sentai, CR, and Funimation, it’s already like that most seasons now.

Furthermore, the Anime Network could like to combine with Anime Lab and other small streaming services. Hell, they already share half of their name.

Of course, all of this requires investment and capital. TAN clearly needs some software and streaming improvements, though their service is much more reliable than in years past. Perhaps it’s time to look to outside investors to really perk up the service. If TubiTV can raise $20 million, when it’s servers constantly crash and lock up, I would think TAN can get a bit of money. With CR having over a million subscribers, I’m sure someone in Japan or the US would be willing to back a major competitor.

Well, rant off. Thank you.

well this survey email drew me out

The evil plan is coming to fruition!!!

where is team FNP when you need it!?

That is a deeply, deeply hidden secret.

Not exactly salacious, but I should be going back to school in the fall. I have several of the non-healthcare credits I need, so I just need to take the actual nursing classes.

So many things to do now.

Also, I just want to slap people and tell them to get over themselves. Just because a TV shows exists, that doesn’t mean you have a right to watch it when, how, and where you want. Not to mention, it’s a FUCKING TV SHOW!!! You’re not going to die without it. I can’t stand that I see more moral outrage over where an anime show streams than people starving to death or not being able to afford healthcare. Save your “outrage” for something that is worthy.

Lastly, I had to get bounced from department to department at my old university to get a copy of my transcripts. There was a financial hold because of an outstanding balance. The amount of said balance, FIFTY FUCKING CENTS!! I had to make multiple phone calls, wait, and use my debit card over FIFITY FUCKING CENTS! It turns out that they very, very slightly overpaid a scholarship during my last semester. WTF? $0.50???

In less angry news, there is a custom breed of dog that is growing in popularity. It’s a cross between a chihuahua and a fox terrier. They call it a TACO TERRIER.

Don’t you just want to rub its little snoot?