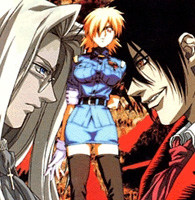 Suprised no one else caught this. Hopefully this means the Geneon Universal mess is figured out. So the rest of the stuff like third Black Lagoon can hurry out.

I’m glad to see New Generation will be handling the ADR production. A Funi “dub” would have likely knocked this off my “to buy” list, especially if they attempted accents. Now hopefully this will actually get a timely release and not be repeatedly delayed like almost every other Funimation release.

The news that Hellsing fans have been waiting for is finally here! Just announced at Anime Central, FUNimation has acquired the home video and digital rights to Hellsing Ultimate Volumes IX & X! The volumes are set to release in Fall 2014. Stay tuned for more exciting information!

Coming this Fall, prepare yourself for the epic conclusion to one of anime’s most brutal and action-packed series of all time. All hell has broken loose, as The Major and his Millennium Organization wreck havoc on downtown London. With Alucard and Alexander battling it out to the death, only Seras and Integra can stop this mad man from laying waste to the rest of the world.

Unfortunately the box containing my collection already is complete. 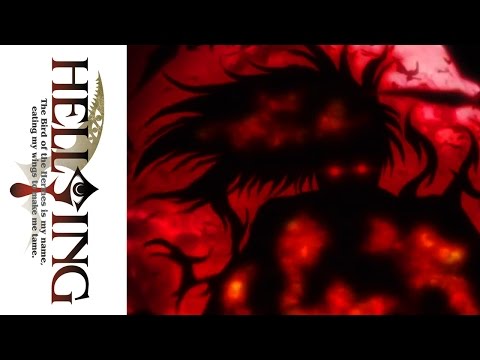 Will they be the right kind of commentaries and interviews?

Will the storage solution be like the kludge that we saw with Black Lagoon? Why Funi didn’t produce a bigger box and pack it with a filler (like they do for most every Part I LE) is a mystery.

Does anyone have word on the three side/extra episodes of Hellsing: The Dawn?

Do you think they’ll be included in the volume IX and X release?

Went through all 37 pages in this section and nothing on it except bits and pieces here and there, and since AS is showing it, might be a few people that want to discuss this show?

Anyone have subs or a transcript, because I can barely hear Crispin Freeman’s pronounced voice over all the excessively loud noise they call an music track? Mostly it occurs when he is talking to Seras Victoria that his voice gets drowned out.

To go though 37 pages to find a thread shows how much of an inconvenience search is. That goes for forums in general these days.

I woke up at 6:00 a.m to catch the premiere and man this is a great way to wake up on Sunday morning. It’s been so long since I watched Hellsing so it’s quite refreshing watching this and being a part of Alucard’s world again. I liked the first episode and even though it’s an hour long, time goes by fast because it’s so engaging.

Yeah the search function only searches the social media crap sections of the website, thee is no forum search at all. obviously there wa a thread, but it got hidden somewhere that CTRL+F couldn’t find it on any of the pages.

I always wonder 2 things. How can he have so many bullets? How big was that cross they melted down to make them to kill vampires since he uses a lots of them. Also why does Seras only carry a heavy sniper rifle? MAybe it says something in the original but that was so long ago I am forgetting.

An hour long I thought it was the whole series and almost marked as watched on AP until I realized they were all that long. Going to be a lot more in them and I hope better than the original 13 and doesn’t leave it opened ended like the original but closes the sotry this time a little better.

Yeah the search function only searches the social media crap sections of the website, thee is no forum search at all. obviously there wa a thread, but it got hidden somewhere that CTRL+F couldn’t find it on any of the pages.

To find a specific thread, set the parameter on the left to “Search Titles Only”
To search the whole forum, set the dates by setting “Find Posts From” to ‘Any Date’

Also, I find that it helps to change “search entire post” to titles only, otherwise the results list can be mammoth and it is rather unwieldy when it has more than a handful of results.

1-8 sit on my shelf o’ BluRay, just collecting dust. Maybe I should finally watch 'em, but I anticipate disappointment.

Watched the first episode . Found the dub rather annoying for most of the characters . Not buying .

Watched the first episode . Found the dub rather annoying for most of the characters . Not buying .

That’s pretty much why I’ve been avoiding the dub of this as the last time I saw it, I wasn’t a dub fan so its lameness played to expectations but now it would just be disappointing

Ugh
Finished up Ep. 01 on VOD today.
Now I remember why I didn’t care for the OVA as much as the TV.
The OST is just horrible.

I wonder if I’ll even bother finishing this.

I’m not sure that I’ve known someone to rank the TV series above Ultimate.

I’m not sure that I’ve known someone to rank the TV series above Ultimate.

I can relate on some level as I’m not much for the Bebop/KotS jazz music. Though, TBH, I don’t really remember the music to Hellsing TV. While it has been years since I’ve seen it, there are anime songs that I’ve only seen/heard once or twice but remember years after the fact.

Well it is called background music for a reason, as it is meant to stay in the background, and sadly this music gets too loud and overcasts and drowns out the voices.