Genres: action, comedy, romance
Themes: ecchi, fanservice, gender switch, girls with guns, girls with weapons, harem, magical girl, yuri
Objectionable content: Significant
Plot Summary: Senō Natsuru is your normal, everyday high school student. However, he’s been chosen to be a Kämpfer, who’s objective consists on fighting other Kämpfer with either guns, swords or magic. However, there’s catch—first, you can’t chose if you’re a Kämpfer or not, and second, you must have the body of a girl to use your powers.
Number of episodes: 12
Vintage: 2009-10-01 to 2009-12-17

Genres: action, comedy, romance, supernatural
Themes: Themes: ecchi, fanservice, gender switch, girls with guns, girls with weapons, harem, magical girl, yuri
Plot Summary: Natsuru Senō wakes up one morning to find he has been chosen to become a Kämpfer, a magical warrior. There’s only one problem: Kämpfers are only allowed to be females.
Number of episodes: 2
Vintage: 2011-03-31 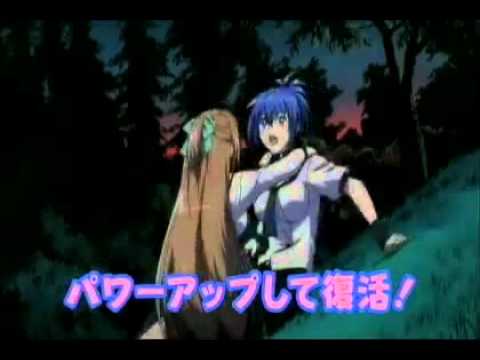 Back cover really makes me wish I had pre-ordered during the last Sentai sale.

I just looked at Kampfer This anime looks really awesome, I can’t wait for the next Rightstuf sale.

Has to do with some disturbing stuffed animals.

posted on 2010-12-30 10:18 EST by Egan Loo
2 episodes based on Toshihiko Tsukiji’s action comedy light novels to air next March

Seems the “new” anime is only a 2 episode special, in essence serving as ep. 13 n 14 to the first season.

If I was Natsuru I would choose Shizuku the student council president.

Seems the “new” anime is only a 2 episode special, in essence serving as ep. 13 n 14 to the first season.

So much for my thought that this would likely be TAN’s simulcast for Spring 2011.

For the record, my expectation for the Winter 2011 simulcast here is Freezing.

Does anyone remember the anime about the all-girl school that was a “Garden of Maidens”? I can’t seem to remember the title, and apparently Kampfer is now doing an imitation of it, in addition to the near constant Mobile Suit Gundam references (I wonder, will the be referencing the Zeta Gundam, Heavyarms, Wing (or Wing 0), Deathscythe, Master Gundam, or even God Gundam later in the series? After a certain point you it was mostly Gundam fighting Gundam as nothing else could perform closely enough and the manufacturing techniques for Gundarium Alloy and Gundanium Alloy were almost common knowledge.)

I am starting get the feeling that in addition to a gender bender that almost makes a series of adult games I know of seem tame (in regards to messing with the main characters head, that is) it also has a very decided intention to reference as broad of a variety of anime as possible in some of the most obscure manners possible.

Maria Watches over Us perhaps?

So gentlemen, what would you do if you woke up one night to find ‘it’ missing and that you suddenly have a new ‘pair’. Also, your center of balance is different, voice has changed, and suddenly it is important what time of the month it is…

So gentlemen, what would you do if you woke up one night to find ‘it’ missing and that you suddenly have a new ‘pair’. Also, your center of balance is different, voice has changed, and suddenly it is important what time of the month it is…

Well, seeing as I’d still have my ‘male’ personality and mindset, it would only be natural for me to…never mind!

AGH! Now I need something to get my mind off this! :pinch:

Actually that’s the one thing most of these shows where someone gets transformed all seem to avoid even hinting at. You’re telling me you find yourself transformed the first thing you’re going to do isn’t to at least check yourself out in the mirror, let alone explore further?

I realize you can only go so far and keep a reasonable rating, but you’d think they could hint at it a little more. I mean it stands to reason, perverted aspects aside, you’re going to need to know what’s where and how it works if you’re going to be in that form for any extended period of time. No pun intended. The only place I’ve seen anything like that is the webcomic Valkrie Yuuki (www.sgvy.com) which gets away with it because, of course, it’s a webcomic. It just seems like it could be handled in a humorous and not necessarily perverted manner.

Kampfer at least has a bit dealing with Natsuru having to use the bathroom while transformed in the first episode. I think in 7 seasons of Ranma 1/2 they only deal with a similar situation one time, too. Ichinensei Ni Naccharata probably deals the most with it, and that manga I sincerely doubt will see an official US release.

It also seems that in any anime like this, the male character is always so dense that he doesn’t want to believe it, and would rather go back than try to adapt to it. It really is pathetic. He sounds like a girl to begin with! :S

The only exception to that would be Kashimashi: Girl Meets Girl. Althuough in his case, there is no way back.

I have to think I’d adapt pretty quickly, myself.

Though if they ever make another season for this series…

They should have at least one episode where the main female characters get a taste of their own medicine and are turned into males for a day or two. I can see it now, “THEY ARE GONE! My voice! My HAIR! And WHAT THE HELL IS THIS!”

So, for 4 episodes now it’s been bugging the hell out of me and I’ve been racking my brain on it.

In the ED, Kaede is swaying back and forth, and in that, she reminded me of another character I’ve seen, but for the life of me I couldn’t figure out who, and then it finally dawned on me tonight!

When she’s swaying back and forth like that, she reminds me of Momoko from Wedding Peach.
I thinks it’s because they have similar character design in that part (similar hair, similar skirt, etc…)