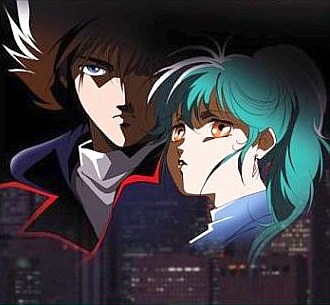 Plot Summary: Motorcycle enthusiast Shogo mistakenly comes into possession of a government prototype bike. Pursued by ruthless government agents he plans to save himself by exposing the bike to the public on a live TV show hosted by a popular singing star. But, even the lovely Eve has secrets of her own and the government has much more to hide than just a transforming military motorcycle. As Shogo begins to unravel the mystery of the bike, he discovers a reality-shattering secret about the city and the world he thought he knew.

Watched Megazone 23 Part 1 on friday and last night part 2… going for the final Part 3 tonight. I’ll have more to say maybe tomorrow after I finish it. Short version: really great classic series. This has rocketed to near the top of my favorite 80s anime.

I can’t believe I’ve waited this long to watch this! Definitely on my shortlist to buy. Every anime collector must have this.

It really is as good as the praise it has received over time, ANN’s Buried Treasure and Mania/AOD’s high marks, etc.

I’m finding the soundtrack supremely excellent and one that I might be categorizing in the best of 1980s anime soundtracks - perhaps only Bubblegum Crisis or KOR might rank higher in my book of era defining soundtrack in the medium. A lot of great compositions and wonderful vocals, with a lot of synths, sounds and production methods that encapsulate the 80s style.

Found these really rare Kumi Miyasato music videos on YT. She was really young when they got her for the voice and singing in the series. She sounds a lot older than she was.

For those of us who lived or grew up in the 80s, these are a blast from the past. They simply do not, and can not make stuff like this anymore. It is a lost art. Watching Megazone and listening to it really takes me back to a great era - miss it.

Gonna have to post this in the other thread as well later.

Sentimental Over my Back:

Part III was disappointing compared to the first I and II parts, which were superb and good, respectively. It jettisoned everything that was great, in the originals, although II did a bit of that too. I would give Part I an A, while II perhaps B, and III a C.

For how great part I is and was though, it’s a historic title and I can’t believe it took me this long to finally get to it. It really is as great as everyone has said and truly captures what the 80s meant in so many ways.

The music was also really great, as I mentioned before, perhaps only Bubblegum Crisis OVA can surpass it in terms of a soundtrack that defined an era, the 80s.

The dub to part I was my favorite, with Vic Mignogna, Allison Keith, Monica Rial and Andy McAvin, although II and III had many cool ADV-favorites as well.

Excellent title that’s on my short list to buy, especially now that I know that the ADV release has a historic extra of Matt Greenfield, David Williams and Janice Williams talking about this title and the history of 80s anime.

As soon as I found out who had created the character designs for Macross(Robotech) and Super Dimentional Orguss; Haruhiko Mikimoto, I had to find other titles he had made. This is where I stumbled on a (un)subbed version of the first movie at a comic store that rented anime.

Funny I just saw a AMV on this yesterday. =D

Anyhow when it was first coming out in the US I rented it, seeing that I had already bought that old video I saw, from the comic store when it was getting rid of it. I then saw Part II(in a club) and later on saw III (the skip-able one in my book) I now bought that 3 pack that came out last year. It looks great on my TV.

Interesting note, they used most the footage from Megazone 23 for a rebranded Robotech movie.

Interesting post Funk, I was wondering if you were going to drop by to comment about Megazone 23 since I remember you and PP talked about it in the old forum.

Did you ever get a chance to watch the supposed Macek-ery ;), I mean Robotech Movie. I wonder if it’s worth seeing?

Not unless you want a good laugh. It made no sense. There was added footage made for it however.

The soundtrack is entirely from the Robotech catalog though. and I remember a robotech calendar I got back in 88 that had a still from Mega 23.

I’ll check this out during the christmas free viewing stuffs

I’ll check this out during the christmas free viewing stuffs.

Warning: The Online Player has only 3/4ths of the franchise.

I still really need to check this one out. Maybe I start it online tomorrow. I have a ton of stuff to get caught up with on here and Crunchyroll…

I still really need to check this one out. Maybe I start it online tomorrow. I have a ton of stuff to get caught up with on here and Crunchyroll…

What? :ohmy:
You mean you haven’t seen it yet? No way!
This should be one of those essential/mandatory animes everyone should see. It’s a classic thru-n-thru: both Harmony Gold’s and ADV’s versions.

Truly one of the most historic titles of the era. I can’t wait to get the ADV DVDs, apparently the extras in it are historic with Matt Greenfield, David Williams and Janice Williams talking about this show, the 80s and some very historic stuff.

Truly one of the most historic titles of the era. I can’t wait to get the ADV DVDs, apparently the extras in it are historic with Matt Greenfield, David Williams and Janice Williams talking about this show, the 80s and some very historic stuff.

It is. The commentary, even it it’s only on part one, is worth the price. It’s a little history lesson on not only the movie but on anime, ova’s, japanese culture in the 80’s.

Great to hear that! Thanks for more detail.

Agreed, even if it was part 1 alone I’d buy it. I haven’t enjoyed an 80s related piece this much since BGC. I definitely want to have the MG, dlw, Janice extras though - I’d pay for that alone too. But to get it all in one swoop is a good deal. Now the only problem is how to get my ever growing list of ADV stuff I need to get before they go OOP. ;(

Well, maybe I will skip watching it online and just grab the DVD then…lol I usually prefer watching stuff that way, and the extras sound pretty awesome. I just have such a large backlog, that I can’t keep up with everything. It’s even hard to make sure I watch everything I download on TAN VOD.

I’ll check this out during the christmas free viewing stuffs

You, my fellow mecha loving fan, would dig it. I know I did.

It is. The commentary, even it it’s only on part one, is worth the price. It’s a little history lesson on not only the movie but on anime, ova’s, japanese culture in the 80’s.

heh, I have never checked the commentary out. New reason to pull it out.

I’m going to be away at a hotel over New Year’s, so unless the hotel has free WiFi, I’m going to miss it during that free viewing too

The problem has been fixed!

Warning: The Online Player has only 3/4ths of the franchise.
It’s a bit confusing with http://www.theanimenetwork.com/component/option,com_kunena/Itemid,65/catid,5/func,view/id,32127/#32127.

Wow! The Matrix sure took alot/inspired from MZ23 and GitS: from overall theme, plot points, character archtypes, set designs, etc. More reason this show should be in everyone’s wall.