The Familiar of Zero / Zero no Tsukaima

The Familiar of Zero TV / Zero no Tsukaima (Season 1)

Genres: adventure, comedy, drama, fantasy, romance
Themes: alternate dimension, ecchi, fanservice, harem, other world, tsundere
Objectionable content: Significant
Plot Summary: Meet Louise, a budding magician. The students at the Tristein Academy call her “Zero Louise”, due to her current record of zero successes with magic. In fact, her magic tends to go spectacularly wrong. Now, as an important test of her aptitude for magic, she must summon a familiar to be her servant. At this critical moment, she summons up all her magic and wishes for a familiar that is “devoted, beautiful and powerful”, and gets… Hiraga Saito, an ordinary Japanese boy. It’s difficult to say who is more surprised and dismayed, but the rules don’t allow for second attempts. Louise is stuck with her strange familiar, and he with her.
Number of episodes: 13
Vintage: 2006-07-02 to 2006-09-24

Familiar of Zero: Knight of the Twin Moons / Zero no Tsukaima: Futatsuki no Kishi (Season 2)

Genres: adventure, comedy, drama, fantasy, romance
Themes: fanservice, harem, magical girl, tsundere
Objectionable content: Significant
Plot Summary: This sequel is a continuation of the previous season, not long after the war. Louise and Saito seemingly getting along now since she knows that he had given up his only chance to return to Tokyo for her. The story continues as Louise begins to use Void Magic from a mysterious secret book she had recieved from her majesty Henrietta, while a new villain has appeared in town causing trouble.
Number of episodes: 12
Vintage: 2007-07-08 to 2007-09-23

The Familiar of ZERO -“Rondo” of Princesses- / Zero no Tsukaima: Princess no Rondo (Season 3) 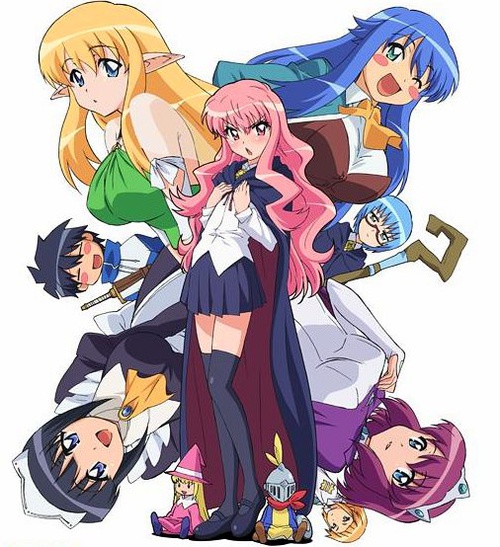 Genres: adventure, comedy, drama, fantasy, romance
Themes: Ecchi, fanservice, harem, tsundere
Objectionable content: Significant
Plot Summary: Following Saito’s heroic actions in the War with Albion in season two, Saito & Louise return to Tristain, only to have the runes which bind Saito & Louise disappear. Saito & Louise struggle with a relationship no longer defined as Master & Familiar, as they search for an Elf who has the power to restore the dead to life, and may hold the key to understanding Saito’s loss of the Gandalfr’s power.
Number of episodes: 12 + OVA
Vintage: 2008-07-06 to 2008-09-21

The Familiar of Zero F / Zero no Tsukaima F (Season 4)

Genres: comedy, drama, fantasy, romance
Themes: ecchi, fanservice, harem
Objectionable content: Significant
Plot Summary: Queen Henrietta has a mission for Saito and Louise once again. She sends them to the pope, who has both Louise and Tiffania become holy maidens. And with all the interruptions around, by both friends and foes, Louise and Saito’s love will be tested to the limit.
Number of episodes: 12
Vintage: 2012-01-07 to 2012-03-24

Wow. I vaguely remember this series. For the longest time this was one of only a few reasons why Christina Vee could be called an anime actress. If this does well I wonder if Sentai will pursue dub continuity with the other parts of this franchise?

Interesting to hear this hot on the heels of Funi’s announcement that they’re finally (planning on) releasing some more of the massive cache of Index/Railgun anime.

Dub continuity may be a little hard on this as I believe this is from what Dragoon and I called a “Not Bang Zoom” dub . If I remember correctly this was one of those we will give you experience for some cheap Voice work dubs. Geneon did it for a few shows to get a dub out I believe hoping they could turn a buck and make the Japanese side change their minds about closing them.

This show was made in Full HD?

Will ANO be getting the 2nd Season in any way shape or form? I remember seeing season 1 and 3 but theres not man legal sites out there that have 2nd season.

Will ANO be getting the 2nd Season in any way shape or form? I remember seeing season 1 and 3 but there’s not many legal sites out there that have 2nd season.

It should be pointed out that one of Sentai’s partners in the UK has announced all four seasons of the show, with at least one of them being sublicensed from Sentai. So the chances that They have seasons two and three are quite good, but they haven’t officially announced anything yet. Regardless, it would still be some time before they are available here, even if Sentai does have them.

It should also be noted that only S1 has been released on Home video by Sentai, They’ve had S4 for a while (available Stream only) and are probably sitting on it until the S2 & S3 deals are worked out, so they can release it all on Home video in order.

It should be pointed out that one of Sentai’s partners in the UK has announced all four seasons of the show, with at least one of them being sublicensed from Sentai.

Technically, MVM only announced the licenses for S1-S3.
They had no idea about S4 and still haven’t announced a license for it.

That being said though, them having S2 & S3 means there’s a good chance Sentai also has them and will announce them at some point.

As was pointed out however, until Sentai either sets a release date for them or announces them, we just have to sit and wait it out here at TAN until then.

Q) Will you be releasing any more Familiar of Zero?

A) Working on it!

Zero no Tsukaima’s Final Series Gets TV Anime in October

Familar of Zero F, Ep 8 is now live at ANO

Familar of Zero F, Ep 9 is now live at ANO

, is now live at ANO