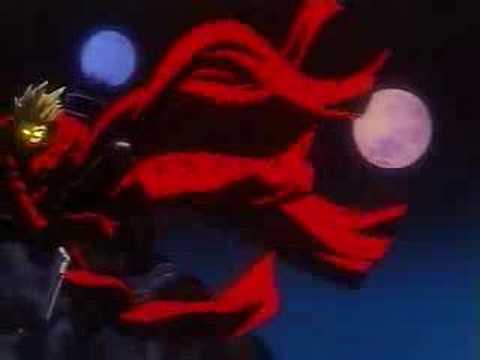 [quote]Genres: action, comedy, drama, science fiction
Themes: post-apocalyptic, space western, western
Objectionable content: Significant
Plot Summary: Vash the Stampede is a gunman on the run with a 60 billion double dollar bounty on his head which has made it difficult for him to go anywhere without being chased and shot at. Every town he ever visits ends up being destroyed because of his pursuers, but miraculously no one ever gets killed. Meryl and Milly are two insurance agents that have been sent to find Vash the Stampede and keep him under surveillance so no more damage is caused. Meryl, who leads the pair, refuses to believe that the man they have met can possibly be the legendary gunman. This spikey haired, gangly, young man is extremely friendly, a pacifist, hates blood and suicide, absolutely loves donuts, and is a dork and a crybaby (far from a notorious outlaw). But there is more to Vash and his past than meets the eye.
Number of episodes: 26
Vintage: 1998-04-01 to 1998-09-30[/quote]
ANN Info Page

[quote]Genres: action, comedy, science fiction
Themes: gunslinger, western
Objectionable content: Significant
Plot Summary: 20 years after meddling into the bank heist of a notorious robber named Gasback, Vash the Stampede is heading towards Macca City. Rumors say that the legendary thief might appear there causing an enormous influx of bounty hunters in the area who want to collect the $$300,000,000 prize for his head.
Running time: 90 minutes
Vintage: 2010-04-02[/quote]
ANN Info Page

The official website for the Trigun the Movie project has opened on Friday with an announcement of the movie’s opening in spring of 2010.

The story is set in Makka, a town surrounded by quicksand. With rumors spreading that the legendary robber Gasback has his sights set on the town, the mayor Kepler has brought together bounty-hunters to protect the town. These bounty hunters have been following Gasback from town to town in hopes of bagging the prize. Meryl and Milly, two characters previously seen in Yasuhiro Nightow’s manga and the later television anime series, have come to town to assess the situation as insurance agents, but are shocked by this turn of events. Moreover, Vash the Stampede is also in town, along with the female bounty hunter Ameria and the fan-favorite character Wolfwood.

This movie is going to be interesting. About time this property got something new!

Love the series and looking forward to the movie.

I’ve never got to watch the whole series, even when it was on Adult Swim. Started collecting the singles, but never got around to finishing them. Then Geneon went bust.

Looking forward to the movie.

This was a great series. I really enjoyed it. Very happy to hear about the movie. Looking forward to it!! Hurry up Spring!!

I’m excited about the movie, but as far as the series goes, when does it take place? Or is it just a nonspecific randomly made movie?

I’m assuming some point in many years in the future. But it doesn’t give a specific time frame that I’ve seen.

[quote=dragonrider_cody]
I’m assuming some point in many years in the future. But it doesn’t give a specific time frame that I’ve seen.[/quote]

Based on the cast list it has to take place during the series.

Wolfwood is listed as being in the movie and he died towards the end of the series.

Hmm still haven’t seen ALL of Trigun, but I did see most of it on Adult Swim and in my opinion it’s largely overated. It felt like an average show at best (even the animation and artwork were average/below average). Sure it’s a little fun, but no real content. Too much style, not enough substance? And I just don’t get the big deal behind this series. Guess it’s not my thing? I’m a huge Madhouse fan too. Also that tall girl was anoying! No offense by any of this, just my opinion.

[details=spoiler] It was too silly, for too long. By the time it became serious, I didn’t care. I wasn’t sold on anything, and didn’t care for any of the characters. And even when it was seriuos, it wasn’t *good *or anything. But that’s just me. Plus he’s a plant wtf? Talk about a curveball.

There is one scene I really like though, it involved Vash going into the Tavern and stealing the bullets from the bad guys or something like that. It was an interesting scene I’ll give them that. I liked how the two anoying girls got mixed up in all that and everything meet at a head at that scene. It was kinda cool what played out…[/details]

It’s not a terrible series or anything, just not worth the praise it gets in my opinion. Rather average at best. Then again my opinion very rarely matched up with what’s popular…

[quote=dragonrider_cody]
I’m assuming some point in many years in the future. But it doesn’t give a specific time frame that I’ve seen.[/quote]

Based on the cast list it has to take place during the series.

Wolfwood is listed as being in the movie and he died towards the end of the series.

I was just going to say something about that!

But I wouldn’t of thought of the spoiler thing…

I agree that its definitely not the best series but for some reason I’m still fond of it.

So I guess this movie is noncanon?

Probably like the Cowboy Bebop movie and just inserted into the series.

I hope it is good. It has been so long since it was being made in Japan… that sort of length of time worries me.

I hope it is good. It has been so long since it was being made in Japan… that sort of length of time worries me.[/quote]

Considering that Wolfwood is still alive in it, it must be somewhere in the middle. 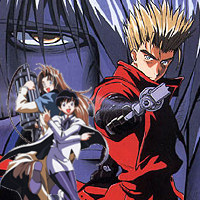 The North American anime distributor Funimation has announced at the Katsucon event on Sunday that it licensed the Trigun television anime series for Blu-ray and DVD from the Japanese company Flying Dog. At the Maryland event, Funimation has also announced the English dubbing cast of the Dragon Ball Z Kai television anime, for which there are only four replacements in the main cast from Funimation’s original version of the Dragon Ball Z anime.

The Trigun anime adapts Yasuhiro Nightow’s manga of the same name. The story follows the misadventures of Vash the Stampede, a gunman on the lam with a “60 billion double dollar” bounty on his head. Vash earned his “Stampede” nickname thanks to the destruction that zealous bounty hunters wreak on any town he visits. Funimation will ship its DVD release this fall.

To me this cool announcement as Trigun is one of my favorite shows. Though I got the whole series on dvd and tape but good chance new fans to pic it. Posted here because I decide not to start new thread after seeing one not start. So I just include it in the old one.