Plot Summary: Enter Sentan, a lush, tranquil island encased in war between the military and those with Hiruko, known as X’amd. On one of these warlike days, Akiyuki Takehara heads off to school and gets caught in a raid by the creatures. Through a series of events he is transformed into a X’amd, and with the help of a Tessikan woman Nakiami along with his high school friend Haru, Akiyuki is forced to learn to live with the Hiruko or faces the danger of losing his self-control and turn to stone.

Sentai Filmworks has confirmed that the upcoming Bluray release of Xam’d Collection 1 will feature
[size=16]DTS 5.1 MASTER HD AUDIO[/size]
on BOTH language tracks.

OH NO! Now what will the lossy people whine about?

The casing is not in gold, booooo!!! for example…

Don’t worry Cody, there is always SOMETHING to whine about

WOW, this is top notch news. This series looked Fantastic on the Playstation network, but to have actual DVD’s is going to be a plus.

This showed up over at Mania today.
http://www.mania.com/xamd-dub-cast-revealed_article_124557.html

Wow, wasn’t even sure it was getting a dub. Fantastic news, and I can’t wait to check it out.
Slick

Jessica Boone is back!

Next to Hillary Haag dubbing again, this might be the best news of the year. The funny thing is that I was recently listening to some add and noted how much the woman sounded like Jessica. I’m so happy right now!

This show looks pretty cool…can’t wait to check it out. And yes Jessica Boone = AMAZING…nuff said.

I just watched the first episode and I have to say that I’m impressed. BONES really outdid themselves as far as the character designs and animation go. It’s probably the best looking work of theirs that I’ve seen. In fact, it gives some feature films a run for their money.

Also, it’s quite clear from the first episode that they took a lot of inspiration from Studio Ghibli. A lot of the machine and character designs clearly pay homage to works like Nausicaa and Castle in The Sky.

The story definitely pulled me in though it’s far to early to draw any conclusions there. But the characters are quite strong from this early episode and the dub is well cast to reflect that. And YES, THE DUB IS VERY GOOD!

The opening is called “Shut Up and Explode”! How awesome is that?!

Was looking through the Online Player and I noticed that Xam’d will be coming up September 16th can’t wait to see this. The animation for it looks great even with Youtube.

I am absolutely in love with the English dub!

It was an interesting first episode. Not sure what’s going on just yet, but I’m intrigued. I think this is going to be really good!

Enjoyed the first episode and loved the OP.

It’s a little on the odd side starting out, but it seems like it might be interesting.
Plus, the first ep. kinda left off with a cliffhanger, abruptly I might add, leaving me with the feeling of wanting to know what happens next.

Well, from the OP, we know the we know that the mysterious silent girl is going to wrangle that beast.

Watched the first two episodes and I’m so excited for more. This seems like my kind of show. And the dub so far has been AMAZING. This may go on my list of must haves from Sentai.

Just got the part 1 DVD’s in the mail today. If this had been in shipping one more day I’d probably be a bitching right now. Disc were both right on the edge of the hubs so one more good shock would have had some floaters. It’s of course the cases and the how high up on the hub the disc sit. It’s oddly a feature cases have so if the disc spin on the hub they won’t get scuffed or scratched by rubbing against the bottom of the case. Just seems these the disc sits a bit to far up. Though I guess if I had switched to at least a Blu-ray player by now the anti-scratch coating and better cases would prevent most of this.lol

Thought I would mention that Amazon has an excellent deal on the bluray set. It’s $42.49 or almost 40% off. It’s not quite as good as the deals you can get during a Right Stuf studio sale, but it’s about the best price I can find right now. 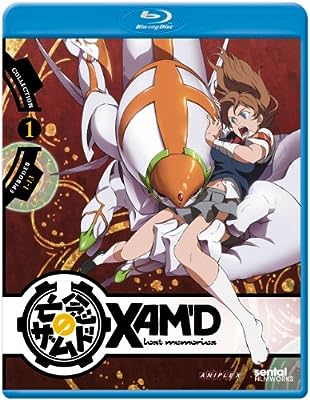 the sound alone might warrant a BD version. The visuals are nice as well.