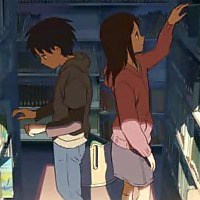 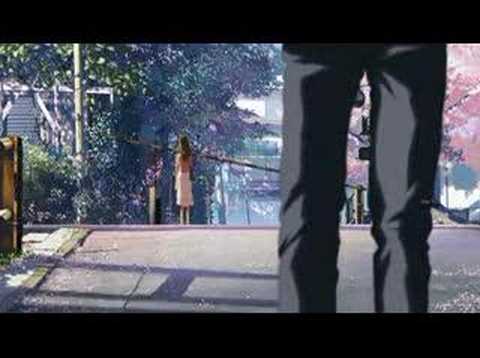 Genres: drama, romance
Objectionable Content: None
Plot Summary: A tale of two people, Tono Takaki and Shinohara Akari, who were close friends but gradually grow farther and farther apart as time moves on. They become separated because of their families yet continue to exchange contact in the form of letters. Yet as time continues to trudge on, their contact with one another begins to cease. Years pass and the rift between them grows ever larger. However, Takaki remembers the times they have shared together, but as life continues to unfold for him, he wonders if he would be given the chance to meet Akari again as the tale embarks on Takaki’s realization of the world and people around him.
Running time: 62 minutes
Vintage: 2007-03-03

I must say that I really enjoyed this movie. It was also the first film from Makoto Shinkai that I had seen. I managed to see it on SVOD in January 2008 right before AN had to stop airing “certain” titles at that time for “certain” reasons.

I was one of the lucky few that managed to get the DVD although I paid full retail price for it which was something I never do but it was money well spent. After this I got ADV’s Shinkai Collection which contained his other works like Voices of a Distant Star/The Place Promised in our Early Days.

Bought this during an ADV sale at rightstuf. Very happy I did. I’m about to watch it again, but this time in high def. Yummy.

ADV gave this away, along with Devil May Cry, during a Best Buy corporate event. All our sups were there, and each was given a copy of both, along with Afro Samurai. Since none of them really watched anime, I ended up being given about three copies of the both.

The best part was, that I had already bought it the day it came out. Oh well, I was able to give away a couple copies to deserving friends, and I believe I still have an extra. Had I known what was gonna happen, I would have held on to them and sold them on ebay…lol.

It’s a very good movie, and one of the best dubs ADV and Stephen Foster have ever done. I highly recommend. It is playing on Crunchyroll, but they used a new dub created by Bang Zoom, and it just isn’t as good.

…and I believe I still have an extra…

I could take that off your hands for you if you don’t know what to do with it.

I really liked this movie. It had good use of music, the animation was top of the line, and the story was really good and really sad. Felt very realistic, like this happened to the director or something. I was lucky and got the DVD at FYE when I heard it was going OOP. It was like $20.00 which is pretty good, considering how much it can go for now. Very glad I bought this, and hope to check out Shinkai’s other two animes that ADV brought over.

Oh and I agree about the dub. This is one of ADV’s finest dubs! I loved it! Amazing stuff! I watched this on crunchyroll too, and Bang Zoom’s dub was alright, but nothing when compared to ADV’s dub.

So I just rewatched this for the first time in a couple of years, and for the first time on my newer TV. I have to say that it’s still every bit as good as I remember. I’m hoping for a bluray release of this someday here in the US, but the ADV release is excellent as far as video quality goes. Upscaled on my PS3, it looks nearly as good as bluray.

As for the dub, I’m hoping someday that an eventual bluray release will include the ADV one as well. I stand by my opinion that it is one of Foster’s finest works. It deserves far better than being unavailable.

Tiffako here and I will be one of the new posters from Crunchyroll!! よろしくお願いします！

︎
I’m happy to announce the start of our Global Shinkai Day!

With the weather warming up and the air filled with love, excitement and seishun, there’s no better way to enjoy Spring than indulging in Makoto Shinkai’s amazing films! Global Shinkai Day is a world wide online film festival hosted on Crunchyroll celebrating the films and works of CoMix Wave Films Director/ Creator Makoto Shinkai. This year from Friday March 14th at 6:00pm pst through Monday March 17th at 6:00pm pst.

Signed by whom? Shinkai himself?

Hmmm, is the dub of Five centimeters per second over on crunchy their infamous redub? I just tried it and I think I’ll have to watch their Japanese offering, though since they don’t stream in HD on Android (making the subs ultra blurry) I won’t be able to do that for a while.

I should rewatch these films dubbed.

Signed by whom? Shinkai himself?

One would assume so, since this is the pic they posted in the CR thread.

I gotta find a way to check out the ADV dubs of 5cm/s as I don’t know how anyone with working ears could consider the Bang/Zoom dubs to be better than Foster’s dub.

So why is this weekend Shinkai weekend? What am I missing?

So why is this weekend Shinkai weekend? What am I missing?

CR started it a few years back…

So it will have the Bang Zoom! dub . While not a bad dub it’s inferior to ADV’s dub. Bang Zoom!'s dub really felt flat compared to ADV’s ,but from what I have heard CoMix Wave Inc. for some dumbass reason felt ADV’s dub was the reason it did not do well.

It was barely on the market. That’s probably why it didn’t do well.

So, yay or nea on the show?

Nay for me, since I have the ADV release. Even if they decided to release it on BD, I’d still say nay…but only just barely.

I may roll with a sub, just to check it out. One day…

So, yay or nea on the show?

The show itself is good but if you heard the ADV dub the Bang Zoom dub won’t sound as good.